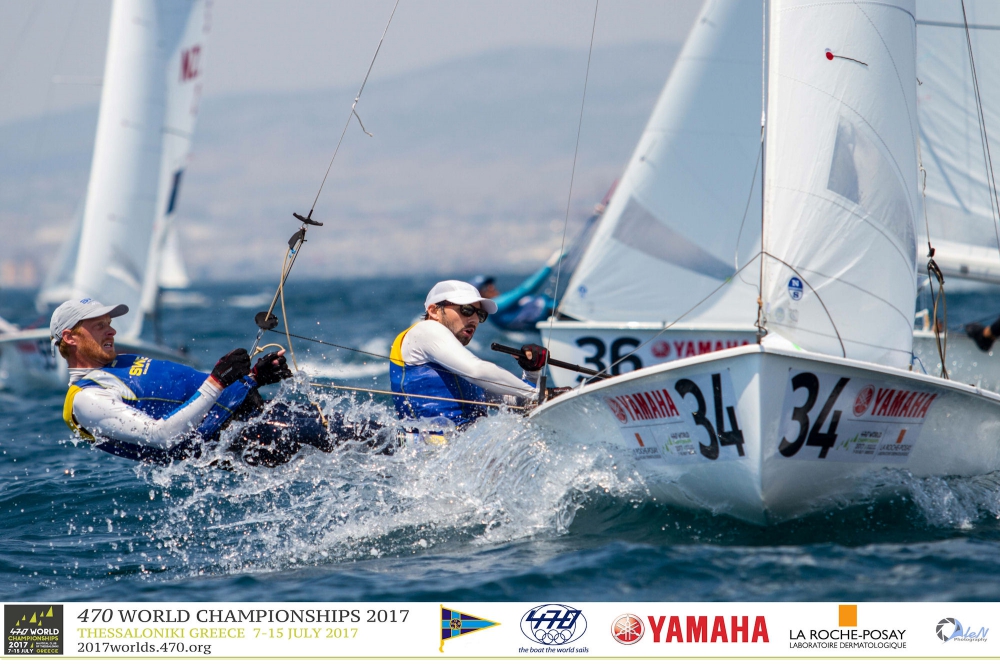 A two-hour postponement ashore waiting for the thermal breeze converted to 8-10 knots for the first race, building to 15-16 knots, under a clear blue sky.

The glamour day saw racing for the one hundred and thirty-three teams from 32 nations get underway around soon after 1400 hours across the two race tracks. All fleets are split into yellow and blue fleets for the 5 race qualification series, and will be reseeded overnight for the final 2 qualification races on Tuesday. From Wednesday’s day 3 of racing, the fleets will contest six final series races, before the top ten men and women teams advance to the Medal Race on Saturday.

470 MEN
Anton Dahlberg/Fredrik Bergstrom (SWE) claimed a 1,2,1 to lead the 470 men at the end of the opening day, and sit on a 3 point advantage over Mat Belcher/Will Ryan (AUS) in second. Third to Turkey’s Deniz Cinar/Ates Cinar.

Carrying the world #1 ranking on their bow are Greece’s Panagiotis Mantis/Pavlos Kagialis. The Rio 2016 Olympic bronze medallists have every ability to mount a credible bid for the World Championship and most recently won the Sailing World Cup Final in Santander. Their opening scorecard was a 10,4,2 and 5th overall.

South Africa’s Asenathi Jim has come a long way since he competed in his first international event, the 2010 420 World, including racking up two Olympic appearances in London 2012 and Rio 2016 with crew Roger Hudson. Here, Hudson has switched to coach and Jim, or “Squirrel” as he is more affectionately known, is racing with Sibu Sizatu. An outstanding day for the pair, scoring a 4,6,12 and placing 11th overall. Sizatu is competing in his first ever 470 World Championship having passed through an intense selection process.

“We are a big group and as in the past members get nominated to compete at international events,” explained Jim on the selection system within the South African 470 squad. “There will be new faces every time, as we never know who is the perfect fit and we are training together so hard and everyone deserves a big event like this.”

“It wasn’t easy to be selected to compete here,” continued Sizatu. “There are a lot of crews back at home and I am one of the crews, but we needed a lighter team to come here and we had a trials and I got the slot. It is a really good feeling to be here.

“It was very stressing,” he explained on facing his first 470 Worlds starting line. “There were tights situations and I was quite nervous as well. I am really pleased about today.”

Another performance of note went to 2016 470 Junior World Champions, Giacomo Ferrari/Giulio Calabro from Italy. The pair bucked the fleet by making an appearance inside the top 10 at the 470 Europeans in May, finished 3rd at the Sailing World Cup Final and launched today’s World Championship assault with a win. Follow-up scores of 14,15 places them in 19th overall.

470 WOMEN
A standout performance from Hannah Mills/Eilidh McIntyre (GBR), who knocked out three wins in the blue fleet.  Mills, the Rio 2016 Olympic medallist has transitioned straight back into the groove, despite stepping out of the 470 this year to race a skiff. After the discard kicked in with race 3, a 3,1,1 scorecard from Slovenia’s Tina Mrak/Veronika Macarol (SLO) puts them on tiebreak in second.

It’s all the experienced campaigners up front, as Amy Seabright/Anna Carpenter (GBR) place in third overall, also  on tiebreak over two-time Olympian Xiaoli Wang from China who is racing her 10th World Championships, and is in fourth overall with crew Haiyang Gao.

“It was pretty cool,” grinned McIntyre on the British pair’s dominance.  “Two really good starts,” she responded when asked about their success, before continuing, “In the third race we had a bad start, but had really good wheels downwind and just picked a few boats up the second beat and extended on the reach. It was nice!”

“It’s cool to be sailing with a gold medallist,” McIntyre concluded on her partnership with Mills. “It’s been brilliant, lots of learning but really cool.  We work relatively similarly and Hannah is lovely.”

Time out of the class has not diminished Mills’ dominance in the 470, although she appreciates their win at the World Cup Final last month was easier. “Yeh, I was well aware that our win in Santander was a smaller fleet and we got away with lots of small mistakes,” reflected Mills. “Coming here we were well aware it was going to be brutal racing and fighting for every point. So, to get a day like today you have to take them when they come, as they don’t come very often.”

Nia Jerwood and Monique De Vries were the best-placed Australian crew in 23rd, five places ahead of Carrie Smith and Jaime Ryan.