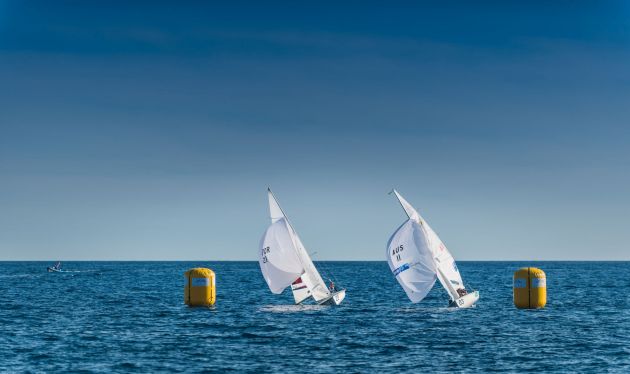 It could have been a tense day waiting to see if the breeze would to fill in, but the Yacht Club de Monaco has proved to be a relaxing spot. A chilled sailors' lounge with cafe and cool playlist, boatpark overlooking the marina and all-round ambience keep everyone happy.

The race course delivered a lighter swell than yesterday, but again the unpredictable breeze was evident in the scorecards, with consistency hard to maintain. Racing got underway soon after 1700 hours, in a breeze of around 8 knots.

A massive reshuffle in the 470 Women after today's two races, as many of the fleet banked a good result, only to have it offset with a lower fleet finish. Israel's Noya Bar-Am/Nina Amir took the win in the first race, with team mates Tsuf Zamet/Noa Lasry claiming victory in the next.

Series leaders going into the day, Mafalda Pires Lima/Mariana Lobato (POR), briefly dipped to second overall after race 3, but ended the day where they began out on top, holding a 5 point advantage over Bar-Am/Amir.

Now counting only top 10 results, as the discard kicked in after race 4 to remove their 14th place from yesterday, Gil Cohen/Stav Brokman (ISR) climb to third overall.

From their results you wouldn’t know Pires Lima/Lobato are contesting their first ever 470 Championship, although their former sailing careers provide plenty of experience. When not 470 racing, Lobato has been competing on a GC32 with the Majenta Project, the team on a mission to promote greater opportunities for women’s sailing.

“It has been a really good experience, and now I am with them to do the World Match Racing Tour,” she explained in reference to joining the first all-female team on the WMRT.

Pires Lima is fresh out of 420 racing, having last month won the Portuguese Junior and Open Championship, and twice represented Portugal on the international stage at the Youth Sailing World Championships. The ten year age difference between the two is proving a winning formula of youth and experience.

“The first race we finished 3rd place, it was a tough race because the level is so high and we need to be always checking and trying to focus and not stop the momentum,” commented Lobato.

“Race 4 we did a mistake on the start and it cost us a lot,” she added, in reference to being left to play catch up after being blocked off the starting line. “Well, we learn with mistakes!”

World #1 pairing Afrodite Zegers/Anneloes van Veen are still struggling to find their rhythm, posting what for them will be disappointing results of 38,18, to languish in 16th overall.

Two races for the 470 Men wrapped up the qualification series, and decided the top 25 teams who will advance to gold fleet racing and a shot at the podium. The rest of the fleet will battle it out in the silver fleet.

World #1 pairing of Carl-Fredrik Fock/Marcus Dackhammar (SWE) were amongst the few teams to post a consistent scorecard, as racing proved to be a day of two halves for some. The Swedes’ 3,1 performance puts them up front, with Mat Belcher/Will Ryan (AUS) dropping to second.

“There is still a long time to go, with more tight racing and points count more,” predicted Dackhammar on the gold fleet racing ahead and likely battle royal set to unfold with the Australians. “So far we are really happy with the sailing. I think we prepared well for this Championship and we have good teamwork in the boat and slowly, slowly we are getting there, but it’s challenging.

“The sailing has been really good, and Monaco is a cool place for sure,” he concluded.

A win in the final race of the day propels Guillaume Pirouelle/Jeremie Mion (FRA) up to third, a position which brought a smile to the face of Mion, as the defending European Champion Mion.

“For sure it’s always about winning and defending our title, but it’s not what we are thinking about now, as Guillaume and I are a new team,” he said in reference to their desire to defend the title Mion claimed with Sofian Bouvet, his former helm. “We are just thinking about improving ourselves every day and every race. But it’s going well so maybe we can think about the title, but we will think about it at the end of the regatta.”

Joining the Swedish, Aussies and French in picking up a race win were Turkey’s Deniz Cinar/Ates Cinar, but disappointingly were over the line for race 5, scoring a black flag penalty.

Two races are scheduled for the 470 Men and Women on Wednesday 10 May, with the first start for the 470 Men gold fleet scheduled at 1300 hours. Wednesday looks set to be another light wind day, ahead of the forecast big breeze arriving in Monaco on Thursday.