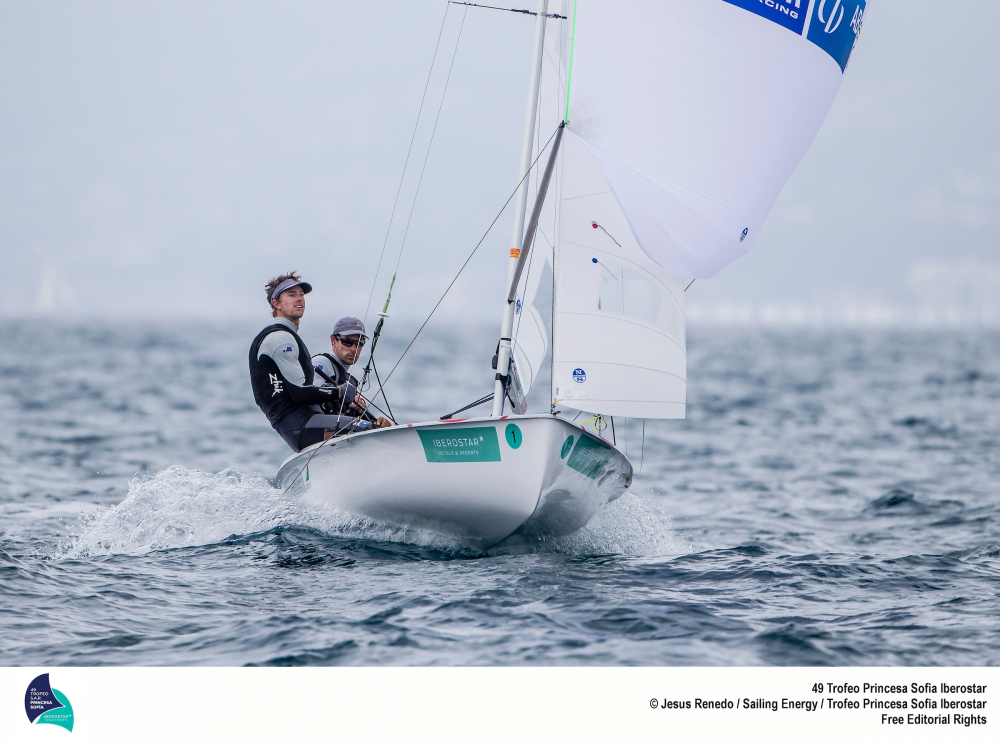 At the 49 Trofeo Princesa Sofia Iberostar Olympic classes regatta on the Bay of Palma Australians Mat Belcher and Will Ryan return to the 470 after a six month break and today climbed to the top of the 470 Men's leaderboard after a 3,1 in what proved to be relatively light airs during their two heats.

The duo, Olympic silver medallists in Rio, current World Champions and class winners here in 2016, maintain they are here to shed any ring rustiness and check in with the strong fleet here, but they appeared to be right into their stride.

“It was a bit lighter than we expected. We started the race in about 15kts and then it died away quickly. So it was a light wind day and so because we have not raced in six months it is good to be back. We feel quite fresh if a little bit rusty and we are here in a big fleet to learn our lessons early on in the season rather than later when it becomes more critical,” double Olympic medallist and five times World Champion Belcher noted.

“We did not really know what to expect here, it is our chance to be back racing in the boat. We have done a little training but not much.”

“I have been doing some 'real work' at home doing developing some residential buildings which is a bit of a change from this. Will has been racing the M32s. We will do Hyeres and then head back to Australia for a bit. I think we will miss the Europeans but we will see how we go.”

In the 49er Class the 30th birthday for world champion helm Dylan Fletcher Scott was celebrated quietly as he and Olympic silver medallist Stu Bithell with a strong 1,1,2 to take the overall fleet lead after six qualifying races.

“That's enough of a birthday present for him. He's getting nothing 'til the end of the week. The big present would be to win here,” quipped Bithell who won 2012 Olympic silver in the 470. The duo have medalled at every 49er event since they paired up last year.

“Neither of us have won here and so that is the objective. We are here to win, it is always to win!” grinned Fletcher-Scott, “We thought there would be slightly more breeze today and it was light and that made it slightly more tricky. But we were on it. We made some good decisions, had some good speed and good enough starts to make sure we had a nice day.

“At 30 I suppose I'm one of the older ones in the fleet and so it is nice to be showing the nippers how to get around the course.”

Returning to the 49er fleet for a one regatta only cameo appearance is popular Italian helm Pietro Sibello just as GBR's double gold medallist Sarah Ayton is doing in the FX fleet stepping in to the crew's job for Sweden's Julia Gross. Sibello is commited to Italy's Luna Rossa America's Cup programme but has taken the chance to return to the 49er for the first time since May 2012 at the 49er World Championship in Zadar, Croatia. The Sibello brothers memorably missed out on Olympic gold when they capsized in the infamous 2008 demolition derby Qingdao medal race.

“It is interesting to be back but the obvious thing is I am enjoying it a lot. I have nothing to prove here just to have some fun and hopefully to make it into the gold fleet with the best guys. There are so many new guys sailing so well. It is good to be racing and keep training,” Pietro Sibello commented. “It was such a pleasant story with my brother and the Olympic medal is still missing but I think we can be proud of how we were on the water and ashore. It was a good life.”

In the Nacra 17 the Italian world championship bronze medallists Ruggero Tita and Caterina Banti dropped to second behind world champion Ben Saxton sailing with Nicola Boniface. Like many others the Italian duo have been winter training in comparitive isolation, with a group in Cagliari, Sardinia, and could not race in Miami because they only have the one boat. Tita recalled today, ” Actually there was big waves we prefer flat water but are overall we are still happy to be fast downwind. We are here to see how our winter preparations worked. We had a long winter training in Cagliari and did not sail in Miami because we only have the one boat. There were many other teams there from Belgium, Finland and Denmark. We are looking to the worlds and to qualify the nation and then go from there.”

Saxton and Boniface sailed a 1,1,2 to lead the Italian duo by two points. Their tally for the day was matched by Spanish veteran Fernando Echavarri and Tara Pacheco from whom Saxton and Katie Dabson snatched the 2017 world title on the last run of the last race in La Grande Motte last September. Boniface is subbing in for injured Dabson for this regatta.

A crew pool rotation system seems to be bringing success so far for the Dutch girls in the FX skiff fleet. Although Annemiek Bekkering and Annette Duetz sailed together from 2014 until the Rio Games where they finished seventh. After that they went their separate ways when they both elected to study. The Netherlands system has their girls sail with each other on a rotation system to find the best combination.

And so Bekkering and Duetz only teamed up together a couple of weeks ago but the old magic is sparking for them again and they have opened a nine points margin over Denmark's Ida Marie Baad Nielsen and Marie Thusgaard Olsen. Bekkering, who won here in 2016 explained,

“It was a real fun day for us. It was tricky to start with because it was choppy then the wind died and it was hard to go fast. We did a good job of getting into the pressure first.”

“We teamed up in 2014 and sailed until the Games. Then the whole Dutch squad system comes in and we have nine girls and all mix up sail with one another. I got back in the boat last April and Annette in September. Then we kept swapping. A month ago we were asked to express our preferences and they work out the matches. So we have been back together for two weeks. We have done a lot of training – just not together – in Vilamoura in Portugal and one and a half months here. We have all done a lot of sailing and you see the group is strong. As a partnership we back each other and the decisions come naturally.”

After four races for the Laser and Laser Radials, 19 year old Australian Finn Alexander, the 2016 Youth World Champion is still holding on to a one point margin ahead of Kiwi silver medallist Sam Meech while Greece's Vasileia Karachaliou holds the Radial overall lead. The Netherlands' double Olympic medallist Marit Bouwmeester has moved up to third, sharing the same points tally as second placed Maud Jayet of Switzerland. Just as the Youth World Champion in the Laser is having his time in the sun at the top of the Laser fleet so Israel's Yoav Cohen, who won the board Youth World title in Sanya, China in December tops the RS:X Men's leaderboard. Briton Bryony Shaw has won two races in the RS:X and lies third behind China's Pei Na.

Leading Australians are Belcher and Ryan (1st) in the 470; Finn Alexander (1st) and Mtt Wearn (5th) in the Laser; and David Gilmour and Joel Turner (5th) in the 49er.