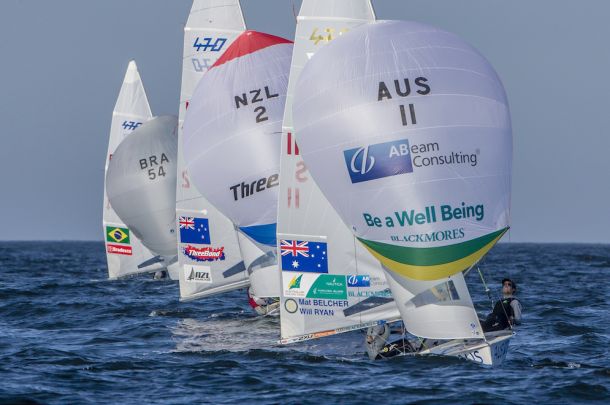 The 2015 Men’s and Women’s 470 World Championships will get underway in Haifa, Israel from Monday, 12 October 2015 with Australian Sailing’s dual World Champions Mat Belcher (QLD) and Will Ryan (QLD) aiming to defend their title for the third time in a row.

In the Women’s 470 Australian Sailing Squad’s Carrie Smith (WA) and Jaime Ryan (QLD) are back in the boat after extended medical issues sidelined Carrie Smith over the last few months. Sasha Ryan (QLD) and Amelia Catt (TAS) complete the Australian contingent in the 42-boat women’s fleet.

Current World #1 and defending World Champions Mat Belcher and Will Ryan, coached by “medal-maker” Victor Kovalenko, continue to be a strong combination having continuously finished on the podium at every sailing regatta they have competed at since getting together post the London 2012 Games.

Most recently they won the 2015 International Sailing Regatta in Rio de Janeiro, Brazil in August – the second Olympic Sailing Test Event on the road to the 2016 Rio Olympic Games.

They also won the 2015 Israel Open Nationals last week which was regarded a built-up event to the World Champs and are aiming to make it three World Championship titles in a row for them as a combination as well as a sixth title for Olympic gold medallist Mat Belcher.

“We are sailing really well and have been really happy with our level of development the past few months. A Worlds is a Worlds – we will be out to win like everyone else. Like at most events, we have a lot of pressure but Will and I have proven many times that we can handle this pressure and focus on what we need to do,” Mat Belcher said.

“With one year to go (to Rio 2016), every regatta is important and lot of teams are looking to break our World Championship run. We are looking forward to racing and we are ready to race.”

The pair managed a short visit back to Australia after the Rio Olympic Test Event, which finished at the end of August and are now ready to take on another highlight as they continue their preparation on the road to the 2016 Olympic Games.

“We managed a short break after the Rio Olympic Event and returned back home to Australia for the first time since March. It was great to see our family and get back into our old boat on the water in Sydney; as well as see many of the supporters who have been helping us on our Road to Rio,” Will Ryan said. “This has allowed a nice transition between events which is important, as to have two such big events such as the Olympic Test Event and the World Championships so close together, is not only quite unique but it really is quite a challenge to perform well for both.”

“We are in a good place as a team. As defending World Champions we obviously have some pressure from our opponents, but I don’t think it is any more than the pressure we place on ourselves to perform well,” Will Ryan added. “Being competitive and self-critical goes hand-in-hand, and with the main event of the Olympics now within one year – the motivation and focus is going to be high throughout the final countdown!”

“We were fortunate to have the Israel National Championships as a warm up event last week. However many of our main competitors have arrived only over the past few days, so we are looking forward to the main event here so we can race them as well!”

The World Championship regatta in Israel is also a significant event for those teams still seeking to qualify their nation to the Rio 2016 Olympic Games, with six places on offer for the 470 Men and three for the 470 Women.

It will be a tough task at hand for the two Australian women’s teams in Haifa, who are coached by Australian Sailing’s Olympic gold medallist Nathan Wilmot (NSW) and are both aiming to qualify the boat as well as vying for a spot on the Australian Olympic Sailing Team for next year.

Both crews are young and up-and-coming sailors with 2013 ISAF Youth World Champion Carrie Smith and crew Jaime Ryan not having been able to complete a major regatta this season because of recurring medical issues. With Carrie Smith having recovered, both have only been back in the boat for a few weeks, while Amelia Catt and Sasha Ryan most recently finished 20th at the 470 European Championships in July.

If required, the final Olympic qualifying opportunity for 470W will be at the ISAF Sailing World Cup in Melbourne mid-December.

The 470 World Championships kick-off a series of 2015 World Championship title events for Australian Sailing Team’s athletes with the 49er, 49erFX, Finn, RS:X and Laser Radial classes also scheduled to sail their respective World Champs within the next two months.