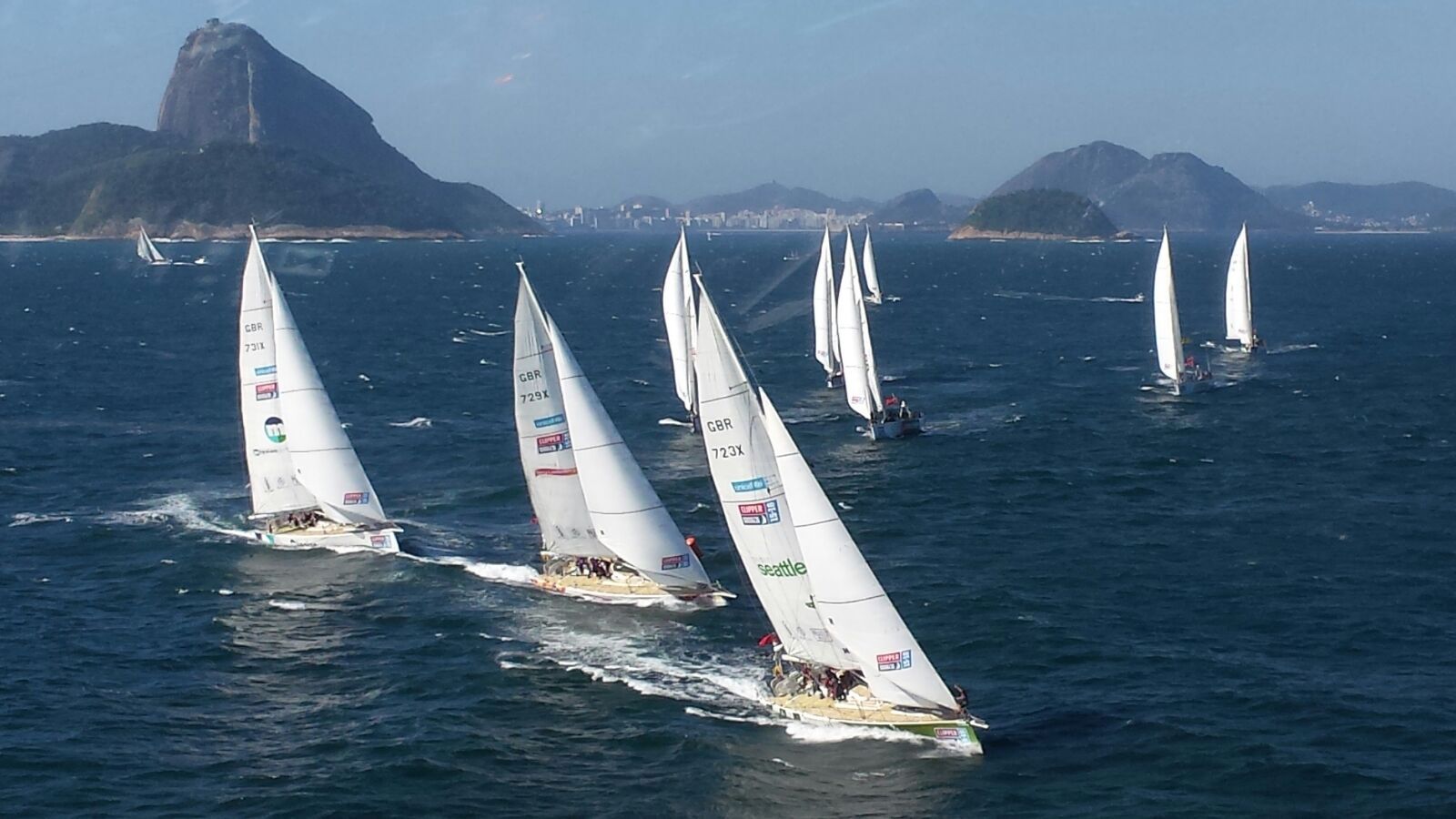 7 October 2015: Rio de Janeiro: The second race in the Clipper 2015-16 Round the World Yacht Race series, The Stormhoek Race to the Cape of Storms, started off the Brazilian coast today for its 3,417 nautical mile voyage to Cape Town, South Africa.

Teams departed in glorious sunshine and 28’C temperatures today from the Rio 2016 Olympic sailing venue, Marina da Gloria. After parading out of Guanabara Bay and past the stunning backdrop of Sugarloaf Mountain, they reached the picturesque beachfront at Copacabana where the Start Line was located, although moved around half a mile further offshore at the request of local authorities today.

Commenting from his start line position on the Committee Boat, Deputy Race Director Mark Light said: “The visibility was good for the race start with teams experiencing 22 knots True Wind Easterly (Force 5 to 6) with a moderate sea state and perfect blue skies.

“Derry~Londonderry~Doire crossed the start line off Copacabana Beach first ahead of Visit Seattle which were closely followed by ClipperTelemed+. Two boats, Unicef and Da Nang-Viet Nam, both started On Course Side (OCS) meaning that they were the wrong side of the line during the final minute before race start. However teams exonerated themselves by coming back around either end of the line before re-crossing (race rules state teams are not allowed to cross the start line from the wrong side of the course and then re-cross the line to start racing) so no penalties apply.”

As at 1900 UTC, Mission Performance is in the lead with Visit Seattle and Derry~Londonderry~Doire just 0.2 miles behind. The rest of the fleet is within two nautical miles of each other at this early stage.

Just ahead of the race start Darren Ladd, Skipper of South African sponsored team IchorCoal, said:  “This being effectively our homecoming leg we really want to do well in the Stormhoek Race to the Cape of Storms. I love South Africa and Cape Town so am definitely excited to go back. Two years ago when the Clipper Race had a stopover in Cape Town I actually came down to see the boats coming in and then spent seven months there teaching sailing. So I know Cape Town well and Langabaan just further north.

“During Race 1 from London to Rio our attitude changed entirely. We got stuck in the Ushant Doldrums at the beginning and we were drifting backwards, falling into last place and all those sorts of things. We looked at each other and said winning isn’t everything but coming last isn’t what we want to do. It turns out we are really quite competitive so we’re all looking to build on our last performance.”

LMAX Exchange and Qingdao are anticipated to start racing on Sunday 11 October after repairs are completed following LMAX Exchange running aground while being delivered to another marina and Qingdao getting into difficulties while offering assistance.

The Clipper Race fleet is due into Cape Town, between 21-25 October and will be berthed at the Victoria and Alfred Waterfront until 31 October.

The Stormhoek Race to the Cape of Storms is underway with the fleet mostly in a tightly-bunched pack after 140 nautical miles and 14 hours of racing.

The fleet experienced strong winds of 22 knots on the nose from the get go. Derry~Londonderry~Doire Skipper Daniel Smith explains the tough beat the fleet is experiencing: “A windy start to Race 2 meant we didn't get eased into the wind and waves in the same way as Race 1. A short sharp sea off the start and a hectic sail change had the crew working hard from the go. Although uncomfortable and testing our sea sickness remedies, 35 knots of wind is sending us south along our plotted course nicely.”

In the first few hours of racing the crew and yachts are already being tested by the stormy conditions the South Atlantic Ocean is well known for. PSP Logistics was hardest hit with a running backstay problem, but given the short distance travelled from Rio, the team is already back out racing after having returned to port for repairs last night.

As of 0800UTC PSP Logistics is only 132 nautical miles behind current leader Garmin.

Ashley Skett, Skipper of Garmin, described the conditions: “We are facing over 30 knots of wind and short, sharp swells on the nose – a recipe for seasickness and most of our team has been affected. The new joiners are facing a baptism of fire as we pound through steep waves at over 50 degrees of heel. It's hard going and even some of our well-weathered round the world crew members are suffering.”

With more than 3000 nautical miles to go to Cape Town, Clipper Race Meteorologist Simon Rowell says the conditions will continue to challenge the teams. “After the fleet left the immediate coastline yesterday, the wind has backed north-east again, coming off the South Atlantic High. This should be the case for the next two or three days before an approaching front comes up from the south and causes tactical dilemmas for the Skippers and crew.”

LMAX Exchange and Qingdao are anticipated to start racing on Sunday 11 October after repairs are completed following LMAX Exchange running aground while being delivered to another marina and Qingdao getting into difficulties while offering assistance.

Following Race 1, the Overall Clipper 2015-16 Race Standings are as follows: