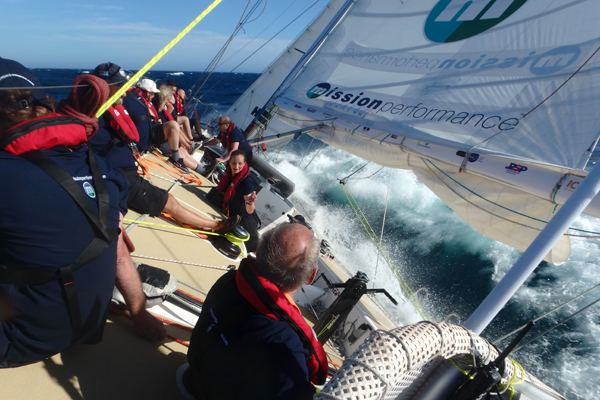 As the crews continue to acclimatise to the tumultuous conditions in the South Atlantic Ocean, the strong winds are helping the fleet make steady progress towards Cape Town, with leader Garmin closing in on the 500 nautical mile mark in less than 48 hours.

“For all of yesterday and today we have had too much wind so the challenge is less about going fast and more about not breaking anything.

“It's been a crazy start for our newly joined crew, who are all a little shocked that we never faced anything this rough in all of the first race. Still, we are all coping well and despite a fair amount of seasickness there are a good number of people who still make it on deck for the watches.”

After Race 1 Unicef lies twelfth in the Overall Race Standings, but a fresh start for the Stormhoek Race to the Cape of Storms has brought renewed energy to the team which as of 0900UTC is currently in fifth place. Skipper Jim Prendergast explains: “Yesterday was non-stop. After a charge through the field we made fourth. We were feeling all warm and fuzzy in some lively, bouncy conditions when we had a mini adventure. The third reefing line parted. We had a think and whilst we could cope with two reefs, (in fact we briefly accelerated to third), we knew something had to be done in the event the wind increased further.

“Sadly an epic four hour odyssey of getting the mainsail down and reefing line spare located, run and hoisted, and then down, rerun and hoisted, and down and re-rerun, meant the watch and I were exhausted. The three boats we had been chasing,Garmin, Da Nang – Viet Nam and Derry~Londonderry~Doire had sailed away. We are back up and chasing now.”

The low front the fleet have been in since leaving Rio is stretching east across the South Atlantic Ocean but over the next couple of days the winds should decrease slightly to around 25 knots, with the occasional gust of up to 40 knots.

ClipperTelemed+ Skipper Diane Reid is looking at this experience as good training ground for what lies further ahead in the race. Skipper Diane says: “Due to strong winds we had to pull down the Yankee 2 and are currently sailing with the mainsail reefed at reef 3 and the staysail.

“In addition, we are faced with fluctuating wave heights which are making most crew seasick – very different to what we faced in Race 1. With some of the watches halved, it is surely a struggle to sail but we are still holding strong and doing our best to regain some distance from the other boats. Surely this will be like an appetizer compared to what lies ahead for us in Race 3: the Southern Ocean. It will be a perfect test to strengthen our team.”

ClipperTelemed+ sits in ninth place, ahead of PSP Logistics.

It is hoped that LMAX Exchange and Qingdao will pass inspection to begin racing on Saturday 10 October, but this is subject to approval by the appropriate authorities. The yachts have been receiving repairs after LMAX Exchange ran around while being delivered to another marina after Race 1, and Qingdao suffered a similar fate while going to offer assistance. The pair will match race across the South Atlantic to Cape Town, South Africa, in the Stormhoek Race to the Cape of Storms and their final positions decided on time lapsed compared to the rest of the fleet.