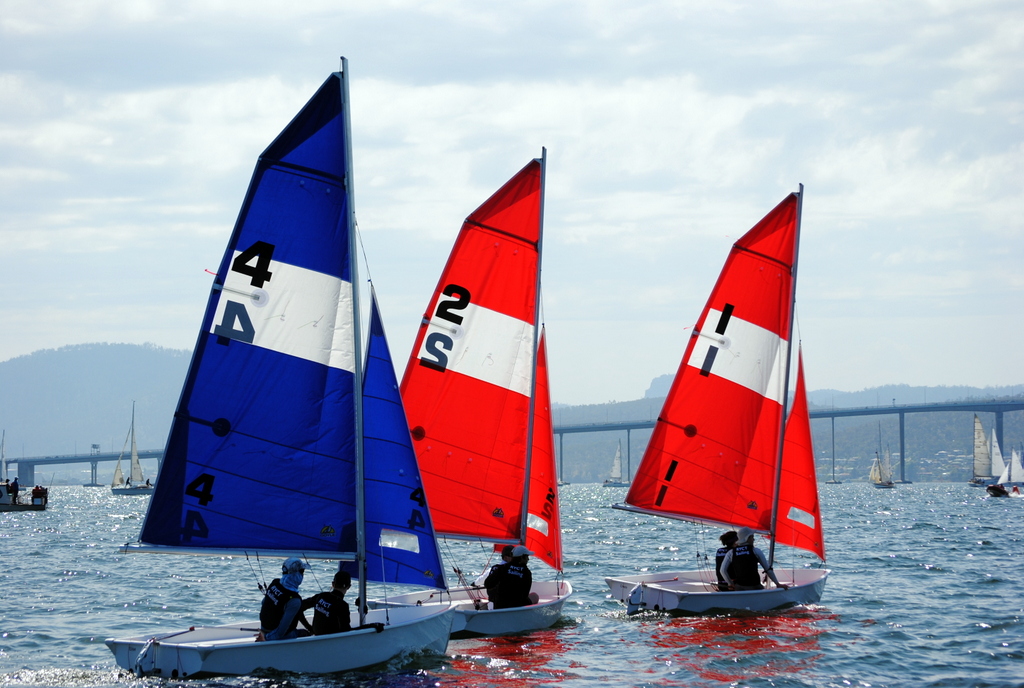 The gaff-rigged cutter Terra Linna that sailed in the first Opening Day of the Royal Yacht Club of Tasmania season in 1880 today joined more than 220 yachts, motor yachts and off-the beach dinghies in celebrating the start of the 2015-2016 summer of sailing on the River Derwent.

Crewed by members of the Guild, Terra Linna today hoisted a mainsail, jib and staysail to give a grand display of how she might have sailed and raced on the Derwent 135 years ago.

In 1880, she was one of just 15 yachts on the register of the Derwent Sailing Boat Club, the club that was the genesis of what is now the Royal Yacht Club of Tasmania.

That year the small fleet of yachts performed “sailing maneouvres off Battery Point”, according the history of the RYCT.

Today the huge fleet sailed in line astern from just south of the Tasman Bridge into Sullivan’s Cove where the Lieutenant Governor, Chief Justice Alan Blow, took the salute aboard the historic motor yacht Egeria.

“Today’s Sail Past must have been the largest fleet we have seen on the river in many years,” commented RYCT Commodore Matthew Johnston who joined the Lieutenant Governor, adding “of course, the weather was perfect.”

Commodore Johnston’s remarks were supported by his father, Rowan Johnston, a Life Member and Past Commodore of the RYCT and member since 1953 who was also on board Egeria today.

The Lieutenant Governor’s other role today was to select the winner of ‘Beauty Prize’ from among fleet,  his choice being Trevassa, owned by the Muir family.

The honour of leading the Sail Past this year went to the Commodore Steve Chau of the Derwent Sailing Squadron, at the helm of his yacht Young Lion.

The light sea breeze enabled most of the yachts to hoist sails with a fleet of the newest boats in Hobart, six Pacer training dinghies following Young Lion in line astern.

Speaker of the Legislative Assembly Elise Archer had christened the Pacers earlier in the day and even went for a short sail in one named ‘Elise’ to record the Club’s appreciation of her efforts to obtain a $30,000 Government grand towards building the dinghies.

Among other lovingly restored wooden yachts taking part today were the 101-year-old yawl Gypsy and the Derwent classer Wendy, but the majority of the fleet were modern yachts built of fiberglass or even more exotic carbon fibre, including the 2015 Sydney Hobart Race contender Cougar II.

After yesterday’s festivities afloat,  more than 50 yachts are expected start the racing season this morning, competing the Channel Race, the first of the Combined Clubs Long Races for the season.

Heading the Channel Race entrants is Tony Lyall’s TP52 Cougar II while also racing will be Commodore Chau in Young Lion, a Young 88.