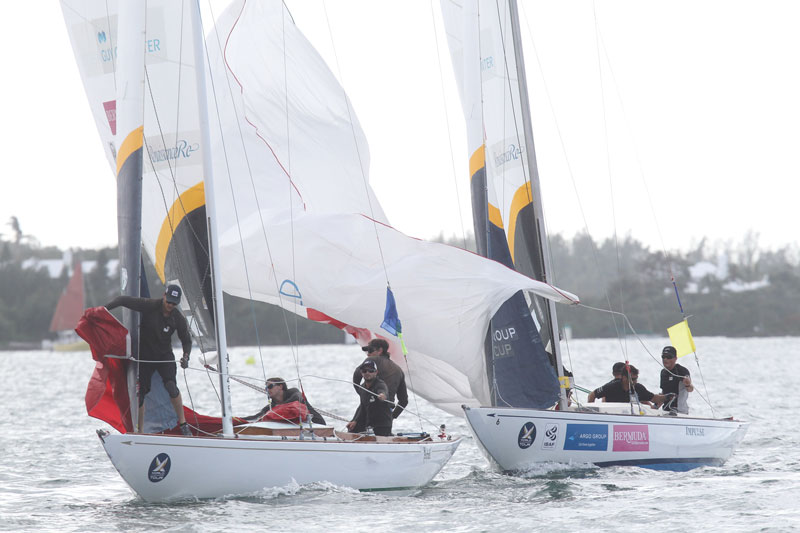 Swinton vs Barker in the repechage round at the Argo Group Gold Cup. Photo by Charles Anderson / RBYC.

Keith Swinton’s Black Swan Racing from Australia and Chris Steele’s 36 Below Racing from New Zealand have advanced to the Quarter Finals at the 67th annual Argo Group Gold Cup, the penultimate event on the 2015 World Match Racing Tour.

The two crews led the Repechage yesterday and then held on today through a long day of racing to advance to the next round. Swinton won the repechage with a 6-1 record while Steele was second at 5-2. Racing was interrupted for nearly four hours as the wind died from the west and filled in from the northwest.

“It was a challenging day for everyone. We had our share of luck,” said Swinton. “We felt like we were sailing well in the first round but had some bad luck that put us in the repechage, so we’re happy to go through.”

The two crews join six others that qualified after initial round robin racing at the $100,000 match racing regatta. With Qualifying complete the event moves into its ladder-style knockout phase. The Quarter Finals, Semi Finals and Final are all first-to-3 points.

Chris Steele in action during the repechage at the Argo Group Gold Cup. Photo by Charles Anderson / RBYC.

Headlining the Quarter Finals is Taylor Canfield’s US One team from the U.S. Virgin Islands. Canfield’s crew is the only one to go undefeated through Qualifying. That earned the crew the right to choose their opponent and they’ll square off against Steele’s 36 Below Racing. Canfield won the Argo Group Gold Cup in 2012 and has placed third each of the past two seasons. He chose to race Steele because the Kiwi is the No. 8 seed in the Quarter Finals.

“We’re not surprised,” said Steele. “We were the last qualifier and he was the first. But we’ve learned a lot in the last day and a half.”

The remaining match pits Ian Williams’ GAC Pindar against Swinton’s Black Swan Racing. “Ian’s a master at starting, but it’s easy to put pressure on him when he loses a few races,” said Swinton.

Notable for not advancing were the two America’s Cup crews, Dean Barker’s SoftBank Team Japan and Francesco Bruni’s Artemis Racing. Both skippers are accomplished match racers and have enjoyed past success at the Argo Group Gold Cup. But they’ve spent more time in the past few years racing foiling catamarans, a far different craft than the International One-Design sloop featured in the Gold Cup.

Barker and Bruni both spoke of the difficulty of coming into a world championship match race regatta with new crews and little practice.

“It’s a big ask to come to a regatta like this with a new group and expect to do well,” said Barker, who’ll be skippering SoftBank Team Japan at the America’s Cup World Series next week. “I felt like we were sailing better at the end of the regatta, but we had a few races go against us when we were leading. The positive is that we got to sail together as a group and build our communications going into next week.”

Quarter Finals start tomorrow morning at 0900hrs (ADT). Stay up to date with the event as we bring live race action via Twitter on @wmrt_liverace and regular updates on @worldmrt from Bermuda. Follow us on facebook.com/worldmatchracingtour to get the latest news, event updates, behind the scenes and information of the Argo Group Gold Cup.