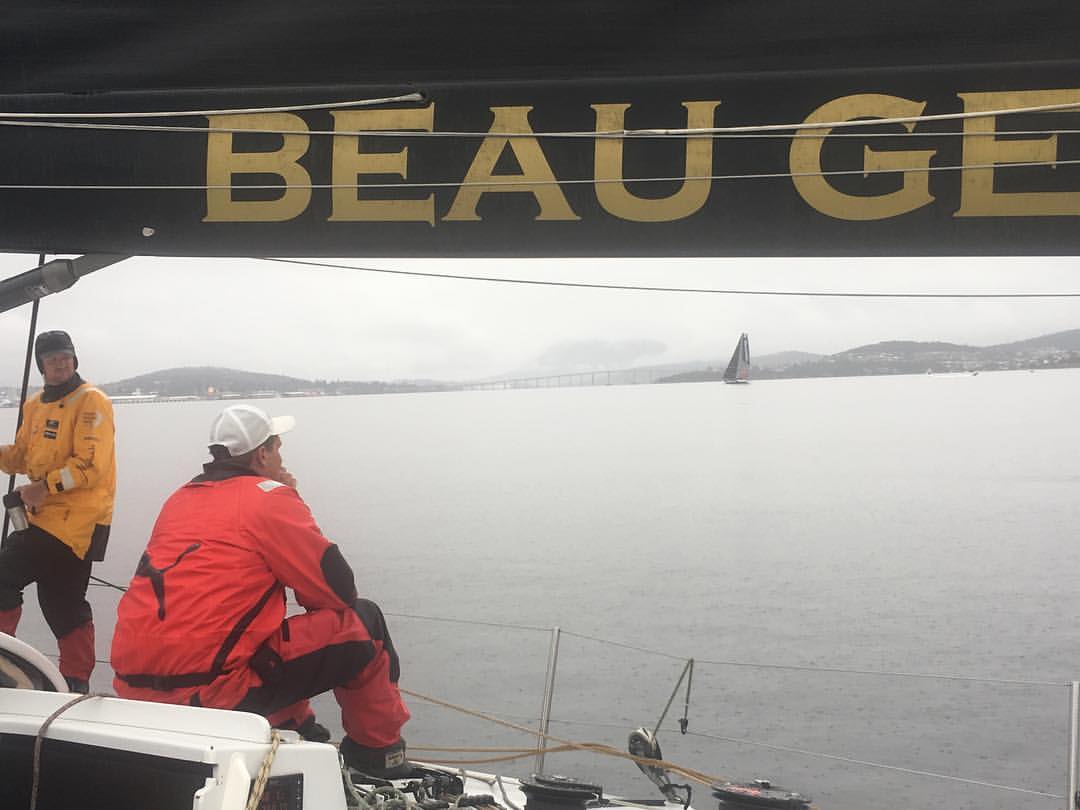 Beau Geste’s sprint south in the annual Rolex Sydney Hobart Yacht Race finished with a slow crawl up Hobart’s sometimes-cruel Derwent River in an early morning breeze too trifling to combat an outgoing tide and help them fight off a late challenge for fourth over the line.

Like their new sponsor Cloudy Bay, Beau Geste arrived into a cloudy, still bay at dawn – a time of day when the local breeze is notorious for shutting down. They remained in irons a couple of miles from the finish line for close to five hours in the rain and at one point had an anchor on deck ready to deploy to slow the Botin 80’s drift backwards with the tide.

Racing for New Zealand, Beau Geste finished fifth from a fleet of 83 yachts with an elapsed time of 1:21:03:34 for the 628 nautical mile race of contrasts.

Once berthed, skipper Aaron Rowe said, “It’s a race that throws up crazy things. In Bass Strait we had beautiful conditions, dolphins and 15 knots reaching in east-sou’east 20 knot breezes and the wind built nicely all the way down the east Tassie coast. Then three miles from the end we fell into a hole.

“Black Jack was eight miles behind us at Tasman Light, came up on us with breeze and snuck around us while we sat within view of the finish from 4.45am until we crossed just after 10am. It was a really fast and fantastic race and we were on really good time, including the race record, until this morning. It was a great experience.”

On her first Sydney Hobart race, which only allowed for around four hours sleep from 45, food stylist and author Donna Hay said, “It was amazing to be in a race so fast and not too rough, though I think the finish really tested everyone’s spirits. I think I can count my blessings.

“We just about went through all the food, but that’s how I planned it. When the boys needed my help I gave it, otherwise I stayed out of the way. There wasn’t a lot of sleep; after a while we kept our boots and wet weather gear on and just curled up on a sail bag.

On whether she’d line up again there was no delay: “Absolutely! It’s going to be hard to go back to my day job. You spend a lot of time as a crew on the rail and helping each other, and my job was keeping the boys’ spirits up. We did some long hours together.”

It was the second Rolex Sydney Hobart finish for Karl Kwok’s Beau Geste, skippered this time by Sydney based Rowe, and the first for Hay who well and truly pulled her weight as a ‘floater’, meaning she wasn’t part of the watch system and had to be awake whenever needed, to keep the crew of 16 nourished and hydrated.

On the first night after the 1pm start from Sydney Harbour and in fast nor’easters that set up Perpetual Loyal’s race record annihilation, Hay and the crew barely slept a wink. Keeping the 80-foot dinghy on its feet required the full racing team’s efforts throughout the night.

Hay was also responsible for stepping up the quality of the usual on-board fare; taking the Kiwi and Aussie crew from freeze-dried style camping food heated in a plastic bag to five stars – homemade Ginger Thai curry for dinner and bacon and egg pies for breakfast.

Cloudy Bay has signed on for an extended partnership with Beau Geste that will see them on the start line for the 2017 Rolex Sydney Hobart, and very likely other yachting events in between.