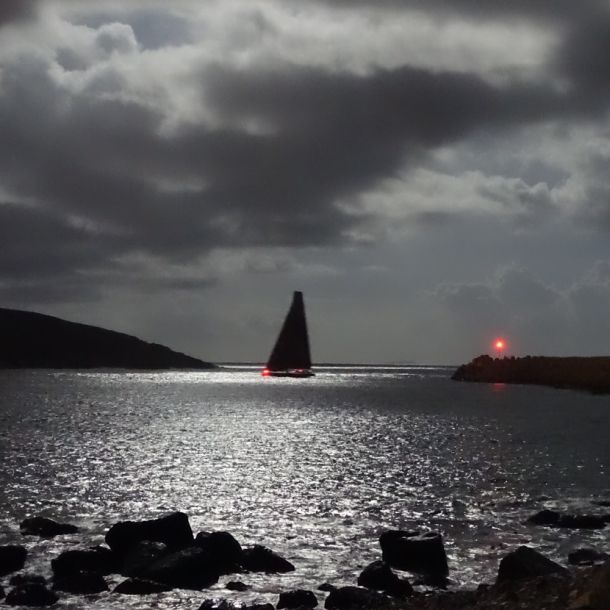 Guided by a full moon and making the most of the warm NE breeze, the international crew of 17 on Karl Kwok’s 80-foot maxi Beau Geste took line honours tonight in the protracted Club Marine Pittwater to Coffs Harbour Yacht Race. Their official finish time recorded at the base of Muttonbird Island just inside the harbour was 21:16:45 this evening, Saturday January 3, 2015 giving them an elapsed time of 1 day 8 hours 16 minutes 45 seconds and an average speed of just 7 knots over the 226 nautical mile course.

The Botin design launched at the end of 2013 is capable of speeds in excess of 30 knots. For the boat’s debut Coffs race the promised fresh nor’easters only teased, turning the usual dash into more of an amble. The most wind Beau Geste encountered was an 18 knot sea breeze this afternoon.

Despite the slow pace “It was a very interesting race,” said Kwok on the dock at Coffs Harbour tonight. “The start was agonising, last night we had a full moon… it was real champagne sailing… then the last 12 hours were really good. We were not happy to hear Team Australia had a problem but accidents are part of the game, unfortunately. We had enough food and drinks to last us to the finish,” he assured.

At close to 30 feet bigger than the nearest in size, the TP52s, essentially Beau Geste was racing by themselves, “but knowing Shogun is a formidable competitor we tried to make sure we gained speed all the time,” Kwok explained. “We knew from day one we wouldn’t break the record so there was no pressure.”

Kwok’s sailing master Gavin Brady commented, “It was one of those nice short offshore races, shorts and t-shirts all the way. A lot of us haven’t sailed this coastline before, we used a little bit of what we thought was right and some local knowledge, and then we did the opposite and went offshore.

“Contrasting to the Hobart race I did last week on Rio they were polar events. Turning left at Sydney on Saturday it just got warmer and warmer, and the ocean was so flat. I didn’t realise there was so much to see on the coastline, you can get in quite close. It’s an enjoyable challenge and we can see why crews take it on.”

Due to the depth of Beau Geste’s keel and the roll in Coffs Harbour it can’t moor securely so tonight the winning maxi is being delivered back to Sydney to dry storage. The rest of the crew were ferried ashore where RPAYC Commodore Ian Audsley, CHYC Commodore John Wait and Corey Yeung, Club Marine NSW state manager, officially welcomed Kwok and his team, and presented the line honours trophy.

The next boat to finish will be Rob Hanna’s TP52 Shogun, which today cleared out from sistership Ragamuffin, last year’s line honours and multiple handicap winner skippered by Brenton Fischer. At 2330hrs the pair was 20 nautical miles apart.

Today’s headlines were all about Team Australia’s dismasting and the line honours victory. Tomorrow’s will be about chasing handicap honours across the various categories, and the poor buggers bringing up the rear including Wave Sweeper which is off Taree and not due to finish until Monday.

Camille, the beautiful Gosford-based Swanson making its offshore racing comeback under newish owner Peter Moran retired this evening at 1923hrs. It’s now tucked up Port Stephens soon to be joined by Sean Langman’s trimaran at the end of a long day of motoring with a jury rig having been forced to cut their broken mast away.

Tonight’s forecast for the Coffs Coast is north-easterly winds 10-15 knots, reaching up to 20 knots south of Coffs Harbour in the evening.