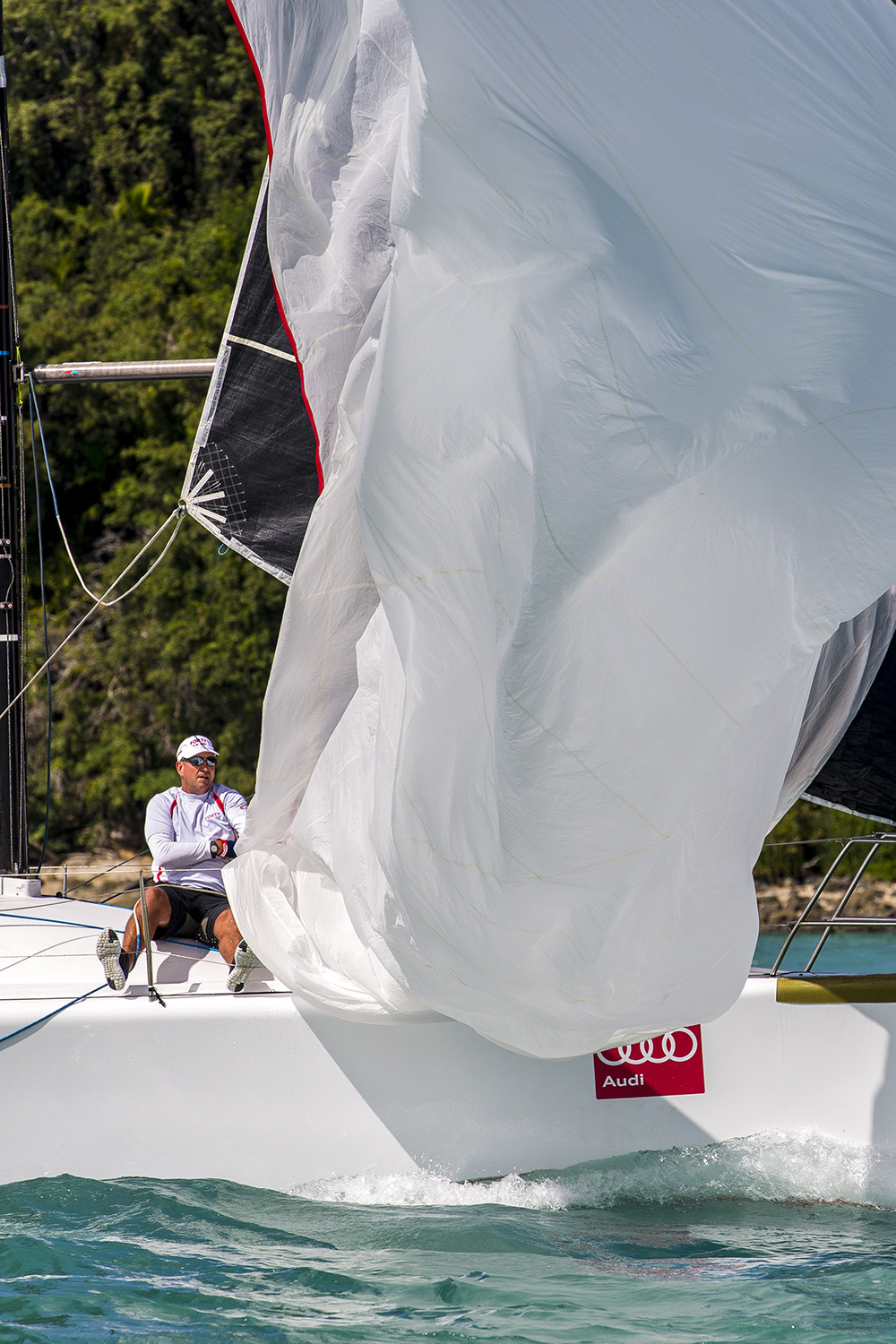 Despite grey skies and showers, it was a busy and colourful start to Audi Hamilton Island Race Week with a record 252 yachts across 14 divisions sent on their way for a 22-nautical mile race around Lindeman Island and back,

A 12-15 knot SSE breeze eased the crews into the regatta with some fast but relatively stress-free racing.

Heavy rain clouds to the east of the course soon delivered widespread showers as the yachts headed for home under spinnaker, most receiving a good soaking before reaching the finish line. But spirits were not dampened by the downpour with most crews speaking of the ideal breeze for the start of the regatta.

In the Rating Racing Division A, Seng Huang Lee’s Scallywag (formerly Syd Fischer’s Ragamuffin 100) and the Oatley family’s Wild Oats XI made an impressive sight as they powered away from the start line on a fast reach down Dent Passage.

Wild Oats XI led as they rounded the tip of Dent Island and she stretched that lead further when Scallywag’s mainsail halyard lock released and the mainsail fell to the deck. Scallywag soon resumed racing but was unable to make up the lost ground.

Karl Kwok’s entry, Team Beau Geste, took up where they left off at Race Week 2015 with an impressive first-up win on handicap in Division A against a strong fleet that includes the likes of Ichi Ban, Secret Mens Business, Patrice and Concubine.

The calibre of racing in this division is unsurprisingly very high, a factor that is front of mind for Team Beau Geste’s skipper Gavin Brady as the regatta gets underway,

“It’s going to be very tight at the top this year and you’d need to be a good few points clear of your rivals in the coming days before you could start to feel comfortable”, said Brady after Team Beau Geste gained the first of those precious points ahead of Matt Allen’s Ichi Ban and two points clear of Jason Ward’s Concubine.

For Scarlet Runner’s owner and skipper Rob Date, the jump from a TP52 of the same name to his more diminutive and fully rebuilt Adams 10 racing in Passage Division 1 is clearly paying dividends,

“It’s early in the regatta but we’ve had great start. We waved to the guys we know on the TP52s as they flew past us” said Date, adding with a laugh “the speed difference is scary!”

For Bruce McCraken, whose Beneteau 4.5, Ikon, took out the Division B IRC win, a bullet on the first day bodes well, contrary to the oft-quoted superstition at this regatta where you should not win the first race if you hope to win the series.

“Passage racing is not really our thing,” said McCraken, “but we stuck to our game plan and it worked out well. We’re much better at the straight up and down stuff, so we’re looking forward to the windward/leeward racing tomorrow.”

Other Divisions
In the Racer Cruiser Division Matt Owen who won the Passage Division 2015 with Local Hero, gave notice that while the boat may be different the team can still turn on the winning ways, taking top podium spot in their division on Day 1.

Sailing with many of his Local Hero crew for the first time aboard Emma Hutchison’s Gold Coast based Sydney 32 Onyx, Owen was delighted with the boat’s first Race Week outing and enjoyed the passage race despite finishing in the rain,

“I don’t know why you’d choose to race around the buoys when you’ve got these beautiful islands” said Owen “mind you we don’t have too many islands in Canberra!”

The media boats struggled to keep up with Simon Hull’s Frank Racing, once she lifted onto her foils. Competing in the Multihull Racing division and hitting speeds of well over 25 knots Frank Racing finished almost 15 minutes ahead of George Owen’s APC Mad Max and Chris Williams aptly all black Morticia to win her division.

Andrew McGrath, owner of the Beneteau Sense 55 Silver Linings, is clearly a believer in the first-day-win superstition despite the boat’s success on Day 1,

“It’s no good winning on the first day, but that said we’re happy with how we went today and better still we didn’t get caught by the major rainstorm” said McGrath, whose crew members are evidently sheep in wolf’s clothing within the Cruising Division,

“Although we’re based in Melbourne we keep the boat anywhere between Sydney and Airlie and we cruise up and down the East Coast, taking part in regattas when the mood takes us” he adds “there’s not much cruising to be had around Melbourne so when we’re at home we race a Mumm 36.”

Tomorrow’s forecast is for southeast to easterly breezes, averaging 6-12 knots, with Rating Divisions A and B sailing up to two Windward/Leeward races and the remaining divisions sailing an islands course.