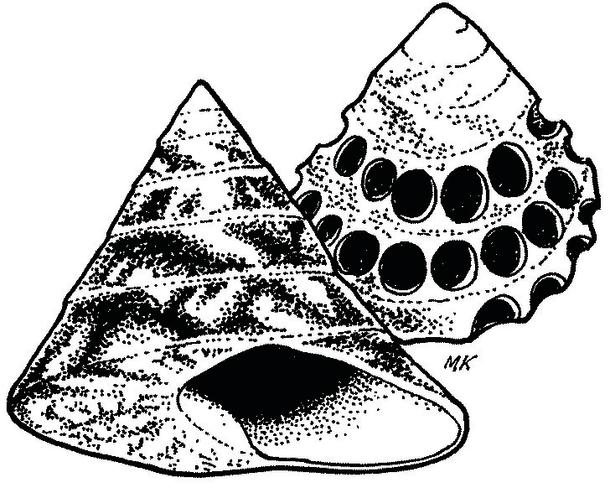 On a recent cruise to northern Queensland on the sailing catamaran Velella, sailors from other yachts often showed me their newly-found treasures over sunset drinks and were curious about what they had found. This first article is one of a series describing the items commonly found on beaches.

The most sought after items are the shells of sea snails, belonging to a large group of molluscs known as gastropods. Gastropods, as a class, include over 65,000 species second in number only to the insects; the class includes single-shelled sea snails and shell-less sea slugs.

The name ‘sea snail’ is generally used to refer to molluscs with a single external shell into which the soft body can be withdrawn. These include conches, turbans, periwinkles and abalone. Those with shells into which they cannot withdraw are the limpets. Gastropods without shells or with small internal shells are known as sea slugs.

Sea slugs, shell-less molluscs or nudibranchs include some colourful species such as the brilliant red and white Spanish dancer occasionally seen by divers.

However, one soft bodied mollusc without an external shell is sometimes found by beachcombers.

This is the greenish brown and well camouflaged sea hare, so-called because it has two extensions said to resemble the ears of a hare. Sea hares are often found in shallow water or stranded by the tide and when poked by curious beachcombers release a startling smokescreen of ink that is often purple or red.

The ink is believed to be toxic, maybe produced to deter or confuse predators.

But beachcombers and shell collectors are particularly interested in the sea snails with attractive or unusual shells. What a fascinating array of molluscs is included in this group.

Sea snails have a single shell which is typically conical with the oldest part of the shell at the apex. The shell grows in a series of successively larger whorls around a central axis and terminates at an opening.

The head often has tentacles and eyes and the foot, in many species, bears a disk called the operculum, which forms a protective trapdoor to the shell opening. The dark green opercula of certain species of turban snails are commonly called ‘cat’s eyes’ and the giant green snail has a massive operculum which is less colourful.

Most gastropods crawl or glide by means of its muscular foot, which is lubricated by special mucus glands. Some, such as the stromb, moves by using its operculum; the spider shell Lambis, for example, moves by jabbing its pointed operculum into the substrate and pulling itself forwards.

Sea snails have evolved for feeding on a wide range of food and its radular teeth are adapted for a variety of feeding methods in different species. The recurved radular teeth are arranged on a membranous belt supported by the cartilaginous odontophore. Some herbivorous gastropods, such as abalone, rasp algae from the substrate. The radula of some carnivorous gastropods such as Murex, and the moon snail Polinices, are adapted for drilling holes in the shells of bivalves.

Many gastropod species are collected for the ornamental shell trade and for sale to tourists. The gastropod groups most in demand are the large, colourful species of cowries, cones, helmets, volutes, conchs and spider shells.

Gathering desirable species of gastropods provides an income for many tropical, coastal communities. But beware, many of the shells sold to tourists in Pacific islands and elsewhere are not taken locally but are imported from countries such as the Philippines, whose waters contain the greatest diversity of many marine species. Buying such shells is not to be encouraged as commercial collecting can result in local overexploitation.

Many shells are collected for wonderful colours or patterns, but many others are interesting because of the shape and sculpturing of the shell. One of my favourite shells is that of the beautifully sculptured precious wentletrap, Epitonium scalare, which is not all that rare but was once considered so and specimens were worth large sums of money.

Some sea snails are interesting because of the way of life. Beachcombers will sometimes find the shells of the Violet sea snail, Janthina janthina, washed up on beaches during strong onshore winds. In life, this mollusc is pelagic and floats on the surface of the sea floating on a raft of air bubbles that it produces. A sea snail that floats and eats jellyfish – fascinating!

Most valuable shell in the world?

Cone shells are highly prized by shell collectors and beachcombers. There are over 400 different species of cones and the particularly striking species known as the glory-of-the-seas, Conus gloriamaris, is legendary.

Although superficially similar to the textile cone shown in the accompanying figure (page 49), it has a much finer network of colouration. In the late 1700s it was coveted by rich European collectors and specimens were auctioned for large sums of money. Only a few specimens were found during the hundred years following its original description and in the 1950s one shell sold for US$2000.

The shell’s popularity among collectors was enhanced by a story, probably apocryphal, of a wealthy collector who purchased one at an auction and then publically destroyed it to maintain the value of one already in his collection. But the activities of sports divers and the discovery of many more specimens have resulted in present prices decreasing; however, the shells are still possibly the most valuable in the world.

Tropical cone shells (Conus species) feed on worms, other gastropods and fish which are harpooned and poisoned by firing a single barbed radula tooth into the prey.

A nerve poison is introduced via a hollow cavity in the tooth and some species, if handled carelessly, are dangerous to humans. Holding the cone by the wide end is less risky but not advisable; although the proboscis emerges from the narrow tapered end, it is quite extendable and can reach some distance from the shell.

Many gastropods are used as food in coastal areas.

One of the most expensive sea snails collected for food is abalone, one of Australia’s most highly valued fisheries products. Live abalone often sells for over $100 per kilogram. But few people in Australia eat abalone and 95 per cent of the catch is exported to Asia.

But once, while poverty-stricken and anchored in Guernsey in the Chanel Islands, my crew and I lived on abalone for a week or two! In Guernsey, we walked around the little coves and sandy beaches where the sea looked clear and calm, but cold. I was encouraged to see some Scandinavian tourists swimming before realising that, to northern Europeans, the water must have felt as warm as a tropical lagoon might have done to a group of visiting penguins.

We snorkelled around some rocky outcrops and found the sea snails locally called ormers. The mollusc’s name comes from a shortened form of oreille-de-mer or ‘ear of the sea’ and suggests the French influence on the island. But ormers are a species of abalone.

We pried the ormers from the rocks and, back at the yacht, tenderised the meat with a hammer, coated it with flour and fried it. The local way of cooking ormers was a little more inventive; they were cooked in a casserole with pork belly, carrots and bay leaves and eaten with a Guernsey biscuit, a savoury roll with a firm crust and fluffy centre; yum!

As a side-note, when we sailed from Guernsey for the coast of France a strange thing happened. We were busy hoisting sails when the sound of ethereal singing came sidling across the sea. I first thought of the Sirens, those seductresses whose sexy songs lured Greek sailors onto rocks, but the sound was a little more earthy and had the tinny resonance of a loudspeaker being used in the wind.

We stopped hoisting sails and turned to see the Guernsey Pilot vessel on which the pilot, or one of his crew, was singing the sea shanty ‘We’re bound for South Australia’. The singer must have noticed the Australian flag. It made the hair stand up on my neck.

The fascination with and value placed on shells dates from the earliest of times. Shells have been used as currency by many civilisations and, in 600 BC, the first Chinese metallic coins were cast in the shape of small cowries.

The scientific name of the money cowry, Cypraea moneta, reflects its use as currency in parts of Asia and in islands of the Indian Ocean.

The first recorded case of over-fishing?

When we sailed from Spain to Morocco we had help from the southerly flowing Canary current, a wide and slow moving current that is said to have been used by the early Phoenicians to sail down the coast of Morocco. What prompted the Phoenicians to leave the relative safety of the Mediterranean and enter the Atlantic? What were they looking for
in Morocco?

They were looking for sea-snails! How bizarre is that? The world’s earliest sea-going explorers, the Phoenicians, sailed away from the known world and risked tumbling off its edge to find stocks of a sea-snail known as the dye murex.

The dye murex secretes a yellowish fluid which was treated and boiled to make the permanent crimson/purple dye known as Royal Tyrian purple and, during the Roman Empire, only senators and emperors were permitted to wear cloth dyed with it.

Rome must have had even more people in government than we have today as the demand was so great that many towns in the western Mediterranean were settled by the Phoenicians as they roamed the seas in search of new beds of murex snails to exploit. So, the over-exploitation of marine species is not such a new thing.

In their brave excursions into the unknown the Phoenicians rode the Canary current down the coast of Morocco where they found new beds of murex snails and established a plant for the production of dye.

There was a continuing demand as, after the fall of the Roman Empire, cloth dyed using Royal Tyrian purple was bought by officials of the Christian church and came to be known as the colours of a cardinal.

The involvement of dye murex in the early history of Morocco is acknowledged in its present day currency; the Moroccan 200 Dirham note has an engraving of a murex shell on it.

Several species with shells with a pearly inner nacreous layer include: abalone, Haliotis species, green snail, Turbo marmoratus and top shells, Trochus, are used in the manufacture of jewellery, ornaments and fashion accessories.

The New Zealand Pāua, the shell of which has a colourful inside layer, is an abalone. The top shell, Trochus niloticus, is collected in several Pacific islands including Vanuatu and the Cook Islands and used in the manufacture of buttons for European and Asian markets. Holes are drilled around the spiral shell to produce the circular pieces of shell which are polished to make buttons.

Beachcombing for seashells is a popular pastime for many Australians, but it is best not to take shells that are occupied by living molluscs. Live molluscs, including helmets, giant tritons and giant clams, are protected due to their vulnerability. The giant trumpet triton, Charonia tritonis, feeds on the Crown of Thorns starfish, Acanthaster planci, its uncontrolled collection has been implicated in the devastation of coral reefs by population outbreaks of the starfish.

So collectors are advised to take only dead shells, not to break corals while searching for shells and to return all overturned rocks carefully to the original position. ≈