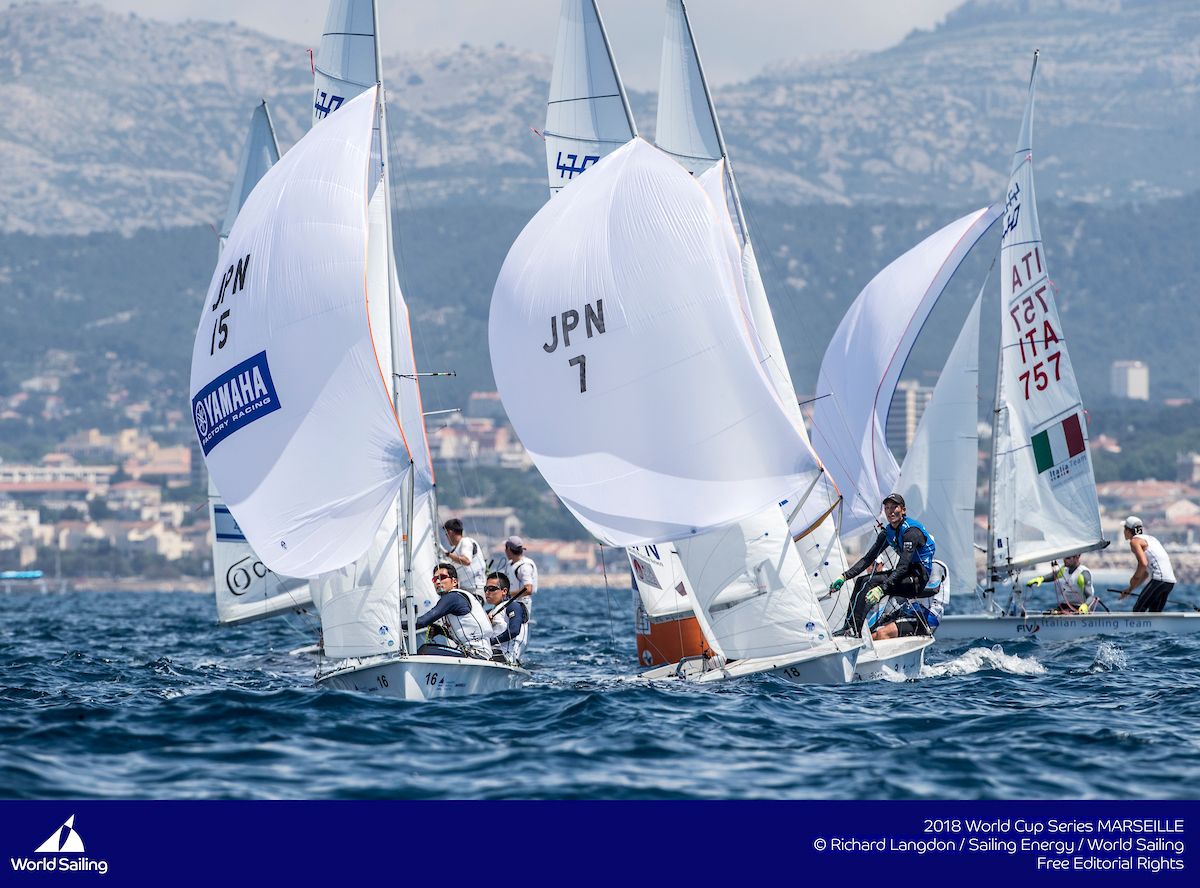 07/06/2018
Sailing's World Cup Series came alive on Wednesday as the medal hopefuls battled it out at the front of their respective fleets in a steady breeze and under blue Marseillaise skies.
Day one of the competition saw the competitors keep their cards close to their chest as they looked to lay down some markers. The second day saw the emergence of some medal contenders pushing ahead at the front of their respective fleets.

Racing commenced at 12:00 local time, with a steady 7-11 knot southerly breeze dancing across the four racing areas to test the 212 competitors from 34 nations racing across eight Olympic events.

Hungary's Maria Erdi backed her judgement in the Laser Radial to close the gap on overnight leader Emma Plasschaert (BEL) to one point.

Erdi, a 2015 Youth World Champion and Olympian, had a slow start to the event, finishing 15th and fifth from the opening day's proceedings. However, she was soon able to find her rhythm as she explained, “We had the same wind direction as yesterday, so I decided to go to the left side of the course and that paid off. My plan was just to get up the start line safe and work my way to the top left. That worked well for me.

“In the first race, I was scared because there were not many sailors who took the left side of the course, but it paid off.

“In the second race I had a good start, went to the left again and it was clearer in my head of what I needed to do. I was clear in my decisions and I managed to win that one so I'm very happy.”

Erdi has now emerged as a clear contender for gold, and both her and Plasschaert have a slight advantage over sailors placed from third to seventh, who are split by just three points.

Nick Thompson (GBR) was the star of the day in the 25-boat Laser fleet. His first and second propelled him into the lead, following a mixed opening day which saw him awarded a full 26-point penalty that he now discards.

Lorenzo Chiavarini (GBR) also put an opening-day disqualification behind him as he recorded two fifths to move into second place, two points off Thompson. Peru's Stefano Peschiera sits in the final podium position.

Italy's Ruggero Tita and Caterina Banti and Great Britain's John Gimson and Anna Burnet are locked on 16 points apiece in the Nacra 17.

Tita and Banti are the form team in the Nacra 17. They won gold at the Trofeo Princesa Sofia and swiftly followed that up with the honours at the final World Cup Series round in Hyères, 90km east of Marseille.

They have brought that form into the Final and are making their time on the water count. “We had to be patient today to find the right moment to make a decision,” commented Banti. “Our speed upwind was good, and we finished all three races in the top five, so it was a successful day for us.”

Vittorio Bissaro and Maelle Frascari (ITA) held the lead after five races but dropped down to fourth after a 15th in the final race of the day.

Come Tokyo 2020, only one Italian team will be able to go to the Olympic Games, if they qualify, but for now the two teams remain close. “We train together, eat together and compete with each other,” explained Banti. “We are family and we all push each other in order to improve.

“Of course, we compete on the water, but we are happy when we see them win.”

After another strong day on the water, Hannah Mills and Eilidh McIntyre (GBR) hold the Women's 470 lead as they bid to defend their World Cup title. The pair finished fourth and second from two races, but Spain's Silvia Mas and Patricia Cantero narrowed the gap on them to a single point.

The Spanish crew took a race win and a third and, although they're in a podium position, they are continuously learning and won't be getting carried away. “It's incredible sailing with the top sailors like Hannah Mills and Camille Lecointre,” commented Silva. “But it is super challenging and you learn a lot, because we are all close on the water and you fight for the best spot.

“We are trying to keep a consistent scoreboard this week and not have any odd results, which could make us lose out on a top position.”

Balázs and Zsombor Gyapjas (HUN) showed their race win on the opening day was not a one-off by continuing their form into the second day of Men's 470 racing.

The Hungarian brothers posted a second and a fourth which promoted them to first from seventh. Overnight leaders Jordi Xammar and Nicolás Rodriguez (ESP) remained at the front of the fleet in both races and are just a single point off the leaders while Australia's Mat Belcher and Will Ryan are in third, seven points from the lead.

Two Japanese teams claimed the day's race wins. Naoki Ichino and Hasegawa Takashi snapped up the first of the day and sit in tenth. Keiju Okada and Jumpei Hokazono followed suit in the next and are one point off the podium in fourth.

Lilian de Geus (NED) maintained a level of consistency that her rivals were unable to match in the Women's RS:X as she advanced to first overall. The Dutch racer took two fourths and a fifth as those closest to her had up and down days with no real consistency.

As a result, de Geus has a six-point lead at the halfway stage of fleet racing. Rio 2016 Olympic bronze medallist Stefania Elfutina (RUS) and Gamagori World Cup winner Hei Man Chan (HKG) are tied on 22-points each behind the leader.

In the Men's RS:X, Rio 2016 bronze medallist and home nation hopeful Pierre Le Coq (FRA) found the sweet spot on the race track, taking a pair of race wins and a fourth.

He moves into pole position in the 19-boat fleet. Pawel Tarnowski (POL) picked up his third win of the week in the first race, but followed up with a sixth and a tenth which leaves him six points off Le Coq. Thomas Goyard (FRA), Louis Giard (FRA) and Radoslow Furmanski (POL) are tied for third on 20 points.

Racing in the 13-boat Finn fleet continues to be extremely close, with no sailor able to take hold and control the pack.

Racing is scheduled to commence at 12:00 local time on Thursday 7 June. Medal Races on Saturday 9 and Sunday 10 June will be streamed live on World Sailing's YouTube Channel and will bring the event to a close.