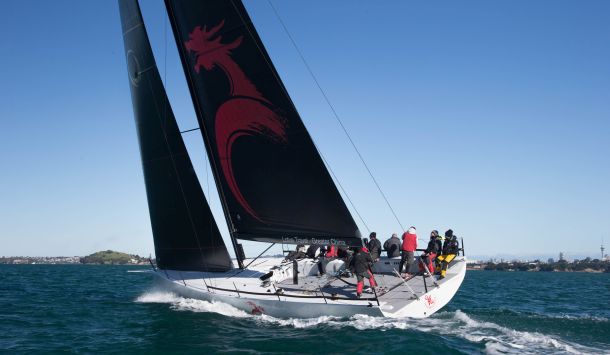 Some of the best IRC boats in the world are heading to Hamilton Island this month for the IRC Australian Championship, reason enough for leading Hong Kong businessman Karl Kwok to launch a brand new TP52 in Auckland and debut it at his favourite Australian regatta destination.

Kwok sold the defending national IRC titleholder and Race Week’s 2014 IRC division 1 winning yacht to Boettcher soon after last year’s regatta in the Whitsundays, to concentrate on the program for his 80-footer also called Beau Geste. Returning to a two boat program with the new TP52 puts him back in touch with the concentration of Australia’s best grand prix teams, and action.

Designed by Botin Partners and built in Auckland by Cookson Yachts, uniquely Kwok’s latest IRC version of a TP52 is set up for inshore and offshore racing.

During Audi Hamilton Island Race Week the fleet encounters a wide range of courses and conditions from downwind starts in current and windward/leeward races in light airs, to plenty of breeze and big waves generated by fresh south-easterly tradewinds.

“To win this event you have to have a boat and team that are well rounded and ready for anything,” says Gavin Brady, Kwok’s long-term sailing master who project managed the build.

“After launching and sailing the latest Beau Geste in the Hauraki Gulf in July we found the boat was hitting her targets and felt balanced, which is a great platform to start from. Our goal at Audi Hamilton Island Race Week and during the IRC championship is to make sure we maximise the benefits that will come from each day spent on the water.  We’ll have our normal mixture of Kiwis, Aussies and a few from the UK making up the crew; it’s not hard to find people to come sail a new 52 in one of the best places in the world to race high performance yachts,” Brady added.

Video of the new Beau Geste

Kwok is a devoted Hamilton Island fan, commenting: “I enjoy the usual sailing conditions and the ambiance, which I’ve learned to cherish! This will be the third time for me to sail on the pristine waters. Knowing all the other boats are well tuned and well sailed, and one in particular is the defender [Secret Mens Business], we have to work very hard indeed to win this championship,” Kwok added.

Past results are on Team Beau Geste’s side, but time on the water is not. While the new boat was passing through the latter stages of its build program, Matt Allen, the Yachting Australia president who also prides himself on assembling a high performance team, bought and modified what used to be Rob Hanna’s champion TP52 from Geelong, Shogun V. He’s spent considerable time preparing the latest in his line of yachts named Ichi Ban for the IRC championship.

Boettcher from South Australia has put a gang of former America’s Cup sailors together for his tilt at the title. Sam Haynes’ latest Celestial is the fourth TP52 in the fleet and there could be a fifth if it arrives from the Philippines in time.

Joining the TP52s in the championship’s division 1 are the two Reichel-Pugh 66s, Bob Oatley’s Wild Oats X and Philip Turner’s Alive, which made a clean-sweep of the Club Marine Brisbane to Keppel Tropical Yacht Race last weekend with an easy line honours win and multiple handicap victories.

Interest in the IRC Australian Championship – Hamilton Island has surpassed expectations. Organisers were anticipating 30 entries, yet by the close of paperwork on Saturday August 1, 2015 had received 40 applications. The race committee may still accept late entries.

All information relating to Audi Hamilton Island Race Week 2015 including the Notice of Race and online entry is on the regatta website www.hamiltonislandraceweek.com.au