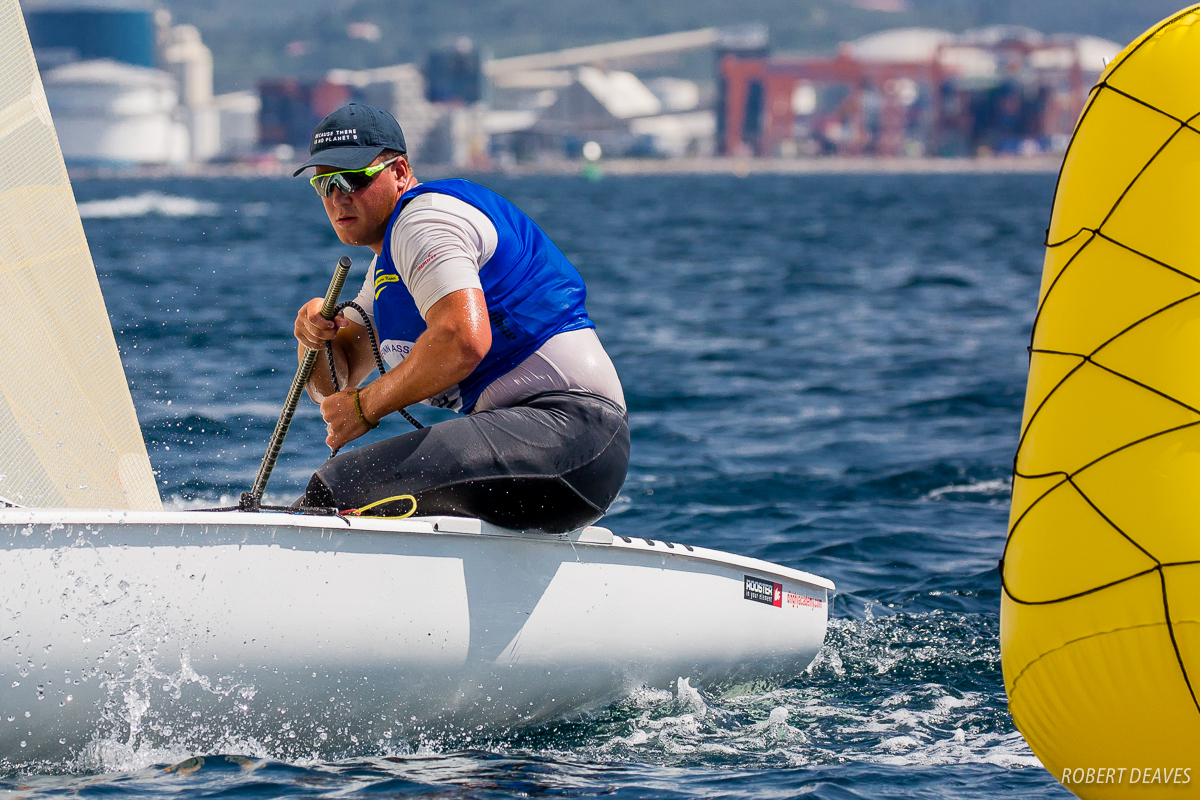 With a race win each on the penultimate day at the 2018 U23 Finn World Championship for the Silver Cup in Koper, Slovenia, Ondrej Teply and Joan Cardona recorded the best scorelines of the day in the 36-boat fleet to set up a last day showdown for the world title. Teply has an eight-point lead and they are separated from third placed Nils Theuninck by a further 16 points. The three race wins went to Cardona, Guillaume Boissard and Teply.

As usual the day started very hot and sunny with a postponement onshore to wait for the sea breeze. When it arrived it was the strongest of the week so far with free pumping in the first race. The cloud building over the land was for many a sign that it would continue to build, but it then dropped in the second and third races, as well as shifting right, though it was still generally a left hand track all day long, with plenty of tacking practice up the shoreline.

Cardona excelled in the windiest race of the day, Race 7 of the series, leading round the top mark and extending downwind with the free pumping flag raised at the first top mark. He was chased by Jock Calvert and Simon Gorgels, but first Gorgels got past Calvert and then Theunick also passed, who then also passed Gorgels. Teply recovered from poor first mark to cross in seventh. He still led but it was now a reduced points lead.

The second race was again about the left, tacking up the shore past the bathing areas, dodging marker buoys and swimmers, and enjoying the scenery. After a high scoring series so far, Guillaume Boisard was looking for a change in fortunes and he got just that. Starting by himself at the boat end he crossed the fleet and led all the way round for a moral boosting race win. Lars Johan Brodtkorb also had his best race to follow in second all the way, while Teply moved up to third on the first downwind and held onto that until the finish to extend his lead over Cardona again.

For the final race, the breeze had shifted right with the top marks further out in the bay, but the leaders still emerged from the left. The battle for supremacy was in full swing with Cardona rounding a boatlength ahead of Teply, with Theuninck not far behind. Teply moved ahead downwind and then extended over the final two legs for a comfortable win to take an eight-point lead into the final day. Oskari Muhonen was briefly in second, but Cardona passed him on the final downwind to take second with Hector Simpson climbing to third to end a second outstanding day.

Cardona explained his race, “In the first raced we had free pumping and I felt very comfortable there. I won the race by a huge gap, but then the wind dropped and I am a bit heavy compared to the other guys, so I struggled a bit but I had a good start and finished the second race in sixth. I touched the top mark so I had to do a 360 so I lost a bit. But then in the last one I managed to finish second so I am very happy with the day. I am but closer to Ondra and a bit further from the guys behind, so a good day overall.”

Expectations, “I knew I was coming here strong and my hope was to win the event, as I always try to do. But, of course, it’s not easy. I would be happy to finish on the podium but the main object is to win. Ondra has a good lead into tomorrow, but I don’t know if we will be able to race or not.”

Boisard said, “The second race was a bit different to the others. The start line it was quite equal on the committee boat and the pin, and I noticed at the last moment that it was favouring the committee boat, so I started there and was almost alone on the line and went straight to the rocks and it was an easy win because I was first from the beginning to the end with a good distance ahead of the others, so I was quite happy about that.”

“My regatta was not running so well, but now that’s a positive point, so I am quite happy.”

There are just two races left to sail on Friday. Some forecasts predict cloudy conditions with no sea breeze developing ahead of more rain on Saturday, but the optimists are hoping that the regatta can finish on a high note with a fitting finale to a great week in Koper to decide the 2018 U23 Finn World Champion.