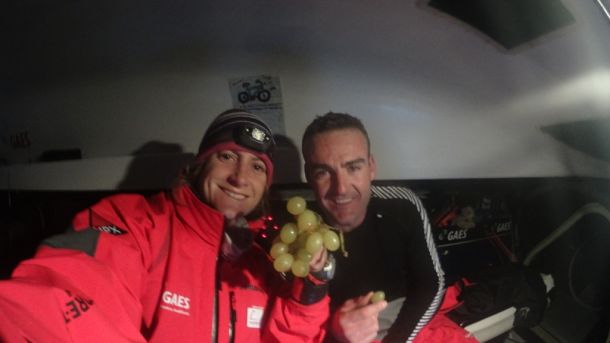 After yesterday’s light winds start, which tested the patience of the 16 skippers with a busy, if slightly slow-motion, send off from the waters off the Hotel Vela (W-Hotel), there has been a steady building of wind strength, and a smooth acceleration of pace for the transition into offshore racing mode for the eight boats competing in the Barcelona World Race.

Alex Thomson (GBR) and Pepe Ribes (ESP) on Hugo Boss have made no secret of their desire to win this edition, and before departing yesterday Alex commented that for the initial stages: “The pressure is to be at the front of the pack and not to not lose too much is important. We feel fortunate that we’ve got a boat that can probably catch everybody up if we need to catch everybody up, but we don’t really want to be in that position really!”

The pair emphatically demonstrated the overtaking speed of their 2010 VPLP/Verdier design over the first 24 hours racing, accelerating through the fleet from fourth to first place to take the lead this morning. But as with all the duos, they have found the pressure of the first night and day quite tiring – as is always the case during the transition from the race build-up on land to full-on race mode, battling in visual contact with the opposition.

Thomson spoke briefly with his team in the early morning: “The breeze did not come through as strong as we expected. So as soon as we got in front of Cheminées Poujoulat and the others, we decided really just to concentrate less on the pre-race strategy and more on sailing the shortest distance and covering the boats immediately behind. All in all it is going well, we are both quite tired as it is has not been easy to get settled into any kind of routine.”

For all that the pre-start weather forecasts had painted a picture of gloom in the Alboran Sea, with light winds becoming lighter, this Thursday afternoon the race-leading trio were moving into this area – where the Straits of Gibraltar start to narrow from the east – and are still making good progress towards Gibraltar. The winds are easing off but the advantage should increase for Hugo Boss, Cheminées Poujoulat and GAES Centros Auditivos, who remain within sight of each other, as they head west – back towards the Spanish coast – and as this trio get closer to the land they should stay with the stronger breeze.

At just 26 hours after Wednesday’s 1300hrs start the leaders were already 50 miles to the east of Cabo de Gata – the promontory by Almeria which marks the entrance to the Alboran Sea, some 175 miles to Gibraltar and the exit to the Atlantic. The race record for the 538 miles passage from Barcelona to Gibraltar was set at the start of the 2010-11 edition by Jean-Pierre Dick and Loick Peyron on Virbac-Paprec 3 at 3 days, 7 hours, 55 mins.

At this afternoon’s 1400hrs (UTC) position update Thomson and Ribes had a four-mile advantage over first night leaders Bernard Stamm (SUI) and Jean Le Cam (FRA) on Cheminée Poujoulat. GAES Centros Auditivos, who were OCS at the startline but gybed early off the Barcelona shoreline to snake their way out of the crowded starting area, are holding firm to third place, within 6 miles of the leaders. Anna Corbella and Gerard Marín have had the longest preparation time together, now close to two years of working, sailing and optimising their Farr-designed boat which started life as Gitana 80, raced the last edition of the Barcelona World Race as Renault ZE and the Vendée Globe as Synerciel.

Fourth placed Neutrogena has been working hard to remain in touch after erring too far to the east of the pack, seeking the strongest NE’ly but sailing more miles, Guillermo Altadill (ESP) speaking today said: “We spent the night reaching quite fast and trying to not lost contact with the boats in front of us, we lost a little bit against Hugo Boss and Cheminees Poujoulat, but still we can see Poujoulat on our port side. So it’s good, we lost a little bit but we are still in contact with them, so we are hoping after Gibraltar we can come back when conditions become a little bit unstable again.”

Renault Captur suffered some issues with their spinnaker halyard, which required Sébastien Audigane (FRA) to scale the mast and work to resolve the situation. In today’s audio conference co-skipper Jörg Riechers (GER) explained:

“Well, we were doing pretty good until we had a problem with the spinnaker halyard [last] night where we lost about 12 miles because we had to go the top of mast and sort out the halyard, and the whole operation took about 1.5-2 hours, plus then cleaning up the mess. So it was roughly three hours we sailed without a spinnaker and we were doing 7 or 8 knots instead of 12-13 knots so it was an expensive mistake!”

Renault Captur is around 40 miles east of the front-runners, and at this afternoon was heading south while the front half of the fleet headed west towards the Spanish shore.

To the north, One Planet, One Ocean / Pharmaton (Aleix Gelabert and Dídac Costa) remain in sixth place, followed by We Are Water(Bruno Garcia and Willy Garcia) with Spirit of Hungary (Nandor Fa and Conrad Colman) currently in eighth, around 75 miles covering the fleet.

Initial predictions were for very light winds in the Alboran Sea, but currently the easterly winds look set to hold and carry the fleet into the Straits of Gibraltar, with the first half of the fleet expected to reach Gibraltar by noon tomorrow.

“The first night was OK. The conditions at the start were a little bit stressful with no wind and with a lot of changes of pressure, so when we got the wind later on, about four hours after the start, things became more quiet [on board] and we started reaching with a good speed.

“Between here and Gibraltar it's going to be still downwind. We already started going downwind with a good breeze. I think it’s going to increase a little bit, especially close to Gibraltar, so on the next 300 miles are going to be downwind and then we hope to pass Gibraltar probably tomorrow midday.”

“Well, we were doing pretty good until we had a problem with the spinnaker halyard [last] night where we lost about 12 miles because we had to go the top of mast and sort out the halyard, and the whole operation took about 1.5-2 hours, plus then cleaning up the mess. So it was roughly three hours we sailed without a spinnaker and we were doing 7 or 8 knots instead of 12-13 knots so it was an expensive mistake!”