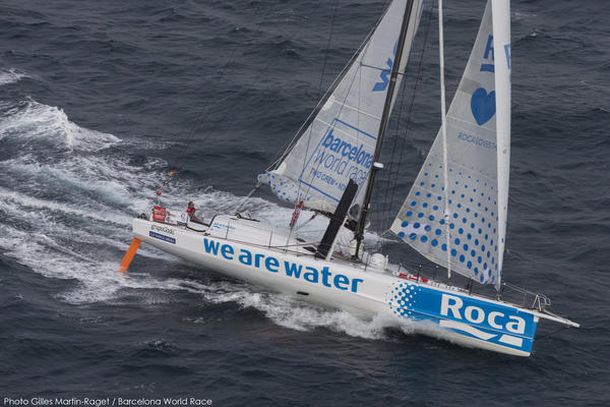 We Are Water. Photo Gilles Martin-Raget/BWR

Another landmark will be ticked off tomorrow for Barcelona World Race leaders Cheminées Poujoulat when they sail north of the lonely Kerguelen Islands.

Coralled north by the race's Antarctic Exclusion Zone, Bernard Stamm and Jean La Cam will pass 300 miles north of the island archipelago which are in every sense one of the most isolated, lonely spots on planet earth, over 2000 miles from the nearest significantly populated area.

The Kerguelen or Desolation Islands were discoveed 240 years ago by the Breton navigator Yves-Joseph de Kerguelen Trémerec and claimed as French. There are hundreds of small islands but the only inhabitants are between 45 and 100 French scientists, researchers and engineers stationed there.

As such they are important point on the race course, almost exactly half way from the Cape Good Hope to Australia's Cape Leeuwin, 2300 miles from the South African cape, 2100 to Leeuwin. They are in effect equidistant from somewhere but quite literally in the middle of nowhere.

They are also the only possible haven for the race fleets when they are crossing this inhospitable stretch of the Indian Ocean. Indeed, just as Jean LeCam was pleased to have passed the Cape Verde islands where his Barcelona World Race ended prematurely, so co-skipper Stamm will subconsciously be pleased to check off the Kerguelens, passing at good speeds with their IMOCA 60 in good shape and with a lead of more than 270 miles. Stamm lost a previous Cheminées Poujoulat when it was grounded in December 2008 during the solo Vendèe Globe. Ironically fellow Swiss skipper Dominique Wavre was also stopped there with a keel problem.

Stamm was not making his memories obv ious indeed he was on good form today when he summed up the Barcelona World Race so far for himself and co-skipper Jean Le Cam.

“A lot has gone on. But all in all the boat performs well , it goes well. Now we had some small technical problems that don'y exactly make our lives easier even now, but nothing is insurmountable. Apart from a passage a little close to the Azores high where we got light winds we have sailed the course we wanted.”

Cheminées Poujoulat is now lined up 275 miles directly in front of second placed Neutrogena, benefiting from more wind which is more consistent than that of the pursuing duo Guillermo Altadill and José Munoz.

The biggest problem on the horizon for the two leading IMOCA 60s is the former tropical cyclone Diamondra which was more of a threat but which looks to be dissipating now after winds peaking at around 55kts. These storms lose their energy quickly when they pass over the colder water. Nonetheless it remains a concern for Cheminées Poujoulat and for Neutrogena and will certainly alter their relatively straightforwards regime in about three days time.

Their passage of the Cape of Good Hope this morning at 1106hrs UTC is the first Great Cape for the Garcia brothers Bruno and Willy on We Are Water. Considering how little preparation time they had prior to the start, and how both were carrying on their day jobs, Bruno as a heart doctor and Willy as a jewellery retailer until days before the start, their success to date is commendable. Indeed of the fleet they are the first genuine 'amateurs' in this race, sailors who make their li ving from outside of the sport.

Anna Corbella and Gérard Marin have meantime stemmed some of their worst losses on GAES Centros Auditivos and have been making double digit boat speeds for much of the day after being badly stuck in a high pressure system, although the light winds are moving east with them. In fact their nearest pursuers, fourth placed Renault Captur are now 416 miles behind when two days ago they were 602 miles astern, but the Spanish duo are now quicker again than Renault Captur'sJorg Riechers and Seb Audigane.

Anna Corbella (ESP) GAES Centros Auditivos:” In fact at the moment we are looking backwards because the meteo we have just now is dangerous for us because the boats in front are gone and the boats in the back are catching us, so at the moment we are looking back. It is our concern. I think after this high pressure we will look forwards again and try to catch some miles again on Neutrogena.

“Right now we are going out and have 14kts of wind, downwind sailing now and sailing faster – at 12 kts – in the coming hours we will probably stop again and the wind will got to the front and we are going to have another problem with the high pressure. For the moment the night was not so bad we were sailing slowly but we it was not so bad.

“From my side, I don’t know what Gerard thinks, it’s a different race from last time. I don’t know if it is harder. Maybe harder is not the word… but it is a little bit more intense because since the first days we’ve been sailing with the head of the fleet and we’ve had more pressure and we’ve had to sail as fast as possible. And this makes the race more demanding but not harder. For the moment the weather is the same (as the last edition) and we are doing pretty much the same.

“To us, particularly in our case, it is hurting us (the exclusion zone) because it really gives us absolutely no choice. With the ice gates we could have gone up and down a bit, and now all we do is go straight along the line of the exclusion zone. I think for other boats it will be different, I guess in every way it is better or worst. That's it. I guess it depends on the case.

Bernard Stamm (SUI) Cheminées Poujopulat: “From the beginning we have been O K, we passed a little close to the high and had light winds but since then we have been able to do what we want with no problems, and we were doing everything we can to go as fast as we can, safely as possible. It has been a good first month.”

A month of racing , what conclusions do you draw?

“A lot has gone on. But all in all the boat performs well , it goes well. Now we had some small technical problems that did not make our lives easier even now, but nothing is surmountable . Apart from a passage a little close to the Azores high we have sailed the course we wanted.
The gaps widen

“It is more obvious now that GAES are caught by the anticyclone. With Neutrogena , maybe it will be a bit of concertina effect, I do not know. We make our way according to the the wind not really compared to other competitors.”

Things are different from solo?

“This is much more serene, sleeping much better. It is good proper slee. Frequently you sleep for three or four hours. Very rarely , much more. Evenother things it is much better . The maneuvers are two , the stacking is with two , it is much simpler.”

“Normally , there is no problem. It's always easier said before , we are not sphinxes , but for many reasons it has to work. The bottom line is it work for many reasons . Jean said before said that the biggest concern was the ego. If it was one of us that had this ego problem , but this is not the case, we are tools to make the boat go, so it 's going pretty well.”

“In front of us on the east coast of Australia , there are two small tropical lows that will come down to us. And our course and strategy will be dicated by how we deal with them. We will have some bad weather, you just have to not push too hard and try and sail in the best, most normal conditions.”

“It is more obvious now that GAES are caught by the anticyclone. With Neutrogena , maybe it will be a bit of concertina effect, I do not know. We make our way according to the the wind not really compared to other competitors.”

Things are different from solo?

“This is much more serene, sleeping much better. It is good proper slee. Frequently you sleep for three or four hours. Very rarely , much more. Evenother things it is much better . The maneuvers are two , the stacking is with two , it is much simpler.”