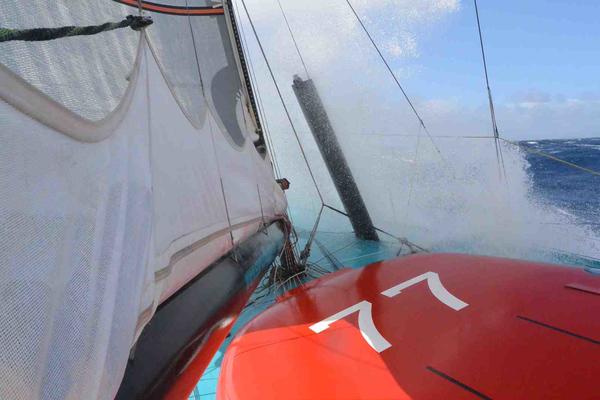 Superstitions run deep among competitive sailors, especially French ocean racers. But on a round the world race which has now spanned two Friday 13ths, it is not bad luck but good luck today which is running with Bernard Stamm and Jean Le Cam on their Barcelona World Race leading IMOCA 60 Cheminées Poujoulat.

Just as the South Atlantic opened to give them a fast and favourable passage from Cape Horn to the Equator, so now the Atlantic after the Cape Verde Islands, is lining up an improved route to the Straits of Gibraltar where they are expected on 21st March.

Yesterday's course in the NE'ly Trade Winds looked set to need two or three tacks to make it to the entrance to the Mediterranean. But this Friday 13th (the second one) sees the winds now veering to allow the Azores to be laid on this one starboard tack. As the files line up today, Stamm and Le Cam would then tack at 150 or 160 miles south of the island group to make it all the way to the Med which they left on the night of January 2nd. Of course forecasting ten days ahead is far from a precise science, but things do look even rosier  today for the fleet leaders.

Bernard Stamm, on the subject of Friday 13th and beating upwind, commented today: “Yes, as far as the weather goes, it’s not too bad. In the south it was very windy. You might not have noticed, but we had a lot of wind, which meant that we could make good headway, but there were nevertheless moments when it was complicated to get the speed up because of the seas. In general, I would say we have been lucky. Let’s hope that continues. We had more or less forgotten what it was like to sail upwind. We’re not very fast and heeled right over. But that was to be expected. It’s the normal weather. Better this than no wind at all.”

Second placed Neutrogena – 360 miles to the Equator – have continued to close miles on Cheminées Poujoulat at a meaningful rate. In four days Guillermo Altadill and José Munoz have recovered a remarkable 570 miles, dropping their deficit back under the 1000 miles mark this morning. And this afternoon it is 951, with the flying Catalan-Chilean partnership making a full 9.2kts faster speeds than Cheminées Poujoulat. Neutrogena is being pressed hard by the vastly experienced Altadill and Munoz taking full advantage in their good SE'ly trades to also gain more miles on Anna Corbella and Gérard Marín on GAES Centros Auditivos. Now over 300 miles south of their nearest rivals, GAES Centros Auditivos have lighter Trade Winds as Anna Corbella ruefully noted today.

“We are sailing north quite fast, but not as fast as Neutrogena and for the next few days it looks pretty much the same. We are not expecting big changes and so it will be difficult to do something to gain some miles, because the conditions are very stable and all that we can do is go is fast as we can.”

If the advantage has swung more decisively in the favour of Neutrogena, in 'Match 1', 1400 miles south in 'Match 2', the all-Catalan bout between the Garcia brothers on We Are Water and Didac Costa and Aleix Gelabert on One Planet, One Ocean & Pharmaton, the two IMOCA 60s are still toe to toe in the South Atlantic. Speeds are even and there is still just 49 miles between the friends and rivals.

Their outlook is not so clear, struggling to find a path to good trade winds, but it remains even more complicated for the 'Cape Horn Heroes', Renault Captur. Their passage northwards is looking complicated, rolling into NE'ly headwinds today. The final two days in the Pacific will continue to be 'sportif' for the Spirit of Hungary duo Nando Fa and Conrad Colman, still racketing east on the same low pressure that they have become attached to for five days, making 15kts.

Are you thinking of Gibraltar and the finish?

“We think about it a bit, but there’s still a long way to go. If you look at the scale of the round the world voyage, of course, we’re getting closer, but it is still further than the distance sailed in a Route du Rhum, so quite some distance to go.Your fastest circumnavigation?
“No I have been around the world in 50 days on Orange. It was different with a crew and maxi-multi and there was a BOC Challenge which was very fast, but the course was different. But this is certainly fast.

A record for the Barcelona World Race?

“It's not something we think about at all. Well, I don't. And I don't know about Jean but I don't think so. It's a curiosity, an aside, the icing on the cake, not a goal or an objective. The goal is to finish, to complete the course and to win. Now, if there is a record on top of that, well and good. We will carry on the way we are, even with this lead we continue to push the boat as hard as possible. It's not like we have the brakes on because of this lead.

“There are a lot of positives. Our routing, the course we have sailed, other than a small bit at Gibraltar where we missed out after the start of the race, we have really done what we wanted. We have kept the boat together. We have had a lot of techncial problems, we have fixed them and kept going, at least until now. And I have got along with Jean and so all in all it is very positive. We are not there yet, though”