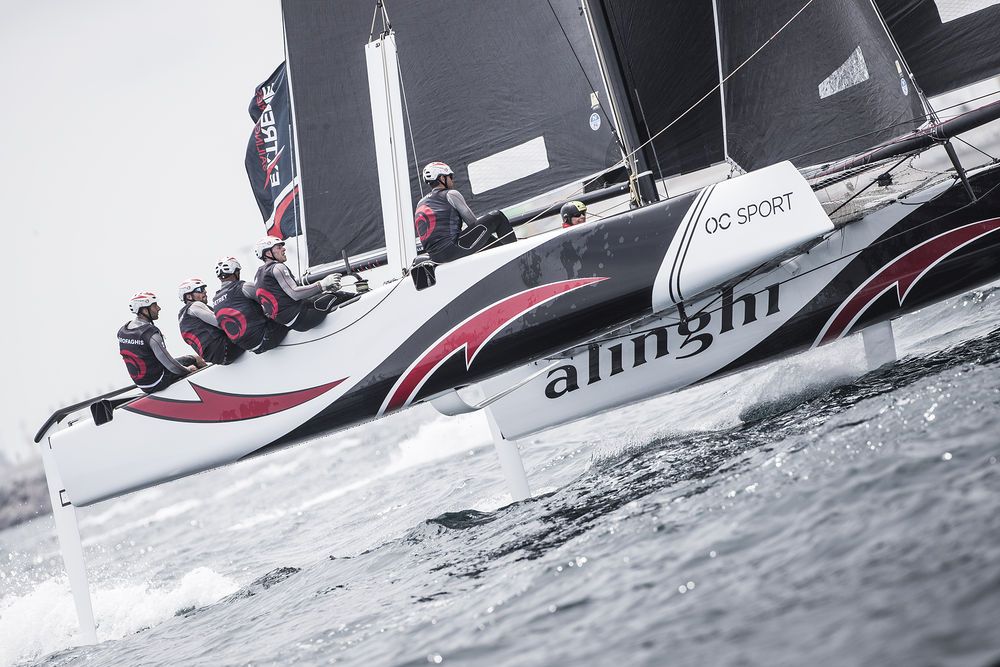 It was success in Spain for three-time Extreme Sailing Series champions Alinghi, as they took their second Act win of the 2018 season today in Barcelona.

The four-day event saw the Swiss shine on the water under the Spanish sun, taking twelve race wins out of 26 in the third Act of the Series. Strategic sailing from co-skipper Arnaud Psarofaghis and his crew – Nicolas Charbonnier, Nils Frei, Yves Detrey and Timothé Lapauw – saw match racing tactics used against rivals SAP Extreme Sailing Team, forcing their opponents further down the fleet.

“We did a good job of keeping the points safe today,” Psarofaghis said, beaming as he stepped off the boat. “We played tactically and it paid off. It's great to win here in Barcelona.”

The Swiss have been locked in a struggle for the top spot with Danish-flagged SAP Extreme Sailing Team since Act 1, Muscat, Oman. Alinghi took the first Act win of the season whilst SAP Extreme Sailing Team ruled the Series rankings at the GC32 World Championship in Riva del Garda, Italy. The teams are now tied on points on the overall Series leaderboard.

They may be disappointed to have finished the Barcelona event in third and to lose their overall lead, but competitive SAP Extreme Sailing Team plan to bring their A-game to Act 4, Cascais, Portugal, from 5 – 8 July.

“We'd hoped for better but we won't dwell on it,” said skipper Rasmus Køstner. “We're looking forward to the next event, it's going to be a long, close season.”

Cheers erupted from Barcelona's crowded coastline as the event drew to a close. Ending the Act on a high, home team Spanish Impulse took the win in the all-important double points final race. Brimming with pride, the thrilled team punched the air with joy as they sailed their GC32 along the shores of sunny Spain.

“We are delighted to win the last race of the day,” enthused skipper Diego Botín. “We've been able to change things because we can watch the racing back on the live streaming. We know we have lots to improve on, but we are very happy.”

After day three saw their boat taken out of action, the Omani team came back fighting on the final day of the competition. Flying through the fleet with sheer determination, Team Oman Air climbed the ranks to finish the event in an impressive second place in Barcelona and third overall.

“We certainly had a bit of fight in us,” said a pleased Phil Robertson, skipper for the team. “We worked well together today and improved our communication on board. We're happy to jump up to second.”

Leigh McMillan, the team's helm and one of the Series' most successful sailors, commented on the day's racing.

“We did really well until the last race,” he explained. “We almost had a podium position at one point, but it all unravelled at the last minute. It's a little frustrating but we will aim to get some points back at the next event.”

Barcelona delivered a mixed bag of conditions, with everything from 5 – 15 knots of wind. Team México skipper, Erik Brockmann, enjoyed the variety as it kept the teams on their toes.

“It was a good event with both light winds and big breeze,” he said. “It was a challenge but we got some good time out on the water and are looking forward to the next event.”

Red Bull Sailing Team finished the Act in fourth place, despite leading the fleet on day one. British-flagged INEOS Rebels UK took fifth, with local boys Spanish Impulse in sixth. Team México round up the fleet.

In the Flying Phantom Series, Team France Jeune sailed their second consecutive day of straight race wins. Following their Act wins in Muscat, Oman and Quiberon Bay, France, they have succeeded in making it a hat-trick in Barcelona.

“We did the job and it's a great feeling,” said an ecstatic Antoine Rucard, crew for the team. “We've won three Acts so we've made a good start. There will be a new team at the next event – Morgan Lagravière and Manon Audinet – so we hope they will put in a repeat performance for Team France Jeune.”

Both fleets will reconvene their on-the-water battles in Cascais, Portugal, from 5-8 July. Expect big breeze and big competition.