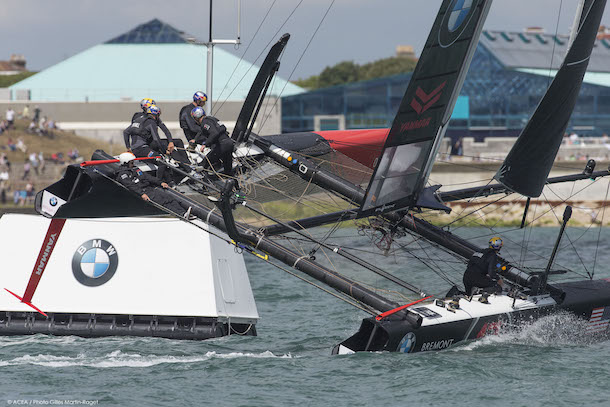 Ben Ainslie, the most decorated Olympic sailor of all time, and the man who is leading the British challenge for the America’s Cup, holds a narrow lead after the first day of racing at the Louis Vuitton America’s Cup World Series in Portsmouth.

Ainslie led his team to a win and a second place finish in the two races held on Saturday afternoon on the waters off Portsmouth.

Nearly 50,000 fans were cheering him on from the venue ashore (with many more stacked along the waterfront outside the ticketed venue). Over 15,000 fans were on some 2,000 boats ringed around the race course area.

“You couldn’t ask for anything better,” Ainslie said. “Fantastic conditions, so many people coming out to support the teams. I’m so happy for Portsmouth and for our team. We have so many people on shore working on our behalf and cheering us on. For them to see this level of support is brilliant.”

“It was a great day for us to be able to put together a good start and a run in both races and be in the lead at the bottom mark in both races,” he said. “We’re pretty green in these foiling boats so we’re happy to come out of the day in the shape we’re in.”

The man he replaced at Team New Zealand, Dean Barker, is now the CEO and skipper of SoftBank Team Japan. Barker says the new team, sailing together for the first time in Portsmouth, is undergoing a learning process. Today saw the team finish on equal points for fourth place with Groupama Team France.

“We’re working hard to improve but it takes a certain amount of time,” Barker said. “These other teams have been doing a lot of sailing together in different boats, so we have to work hard on making improvement and eliminating mistakes to get closer to the front of the fleet.”

ORACLE TEAM USA, the defending champion, had a challenging day, ending the afternoon in third position, with second and fourth place scores on the day. Artemis Racing struggled to a fifth and sixth place

Saturday delivered glamour conditions on the Solent, to mark the return of America’s Cup racing for the first time in nearly 165-years. Sunshine returned after a day of heavy rains. Wind conditions of 10 to 14 knots allowed the teams to demonstrate their skill on the new foiling class of catamaran, the one-design AC45.

Racing continues on Sunday, with double points on offer for the two races. First start is 1340 local time in Portsmouth.