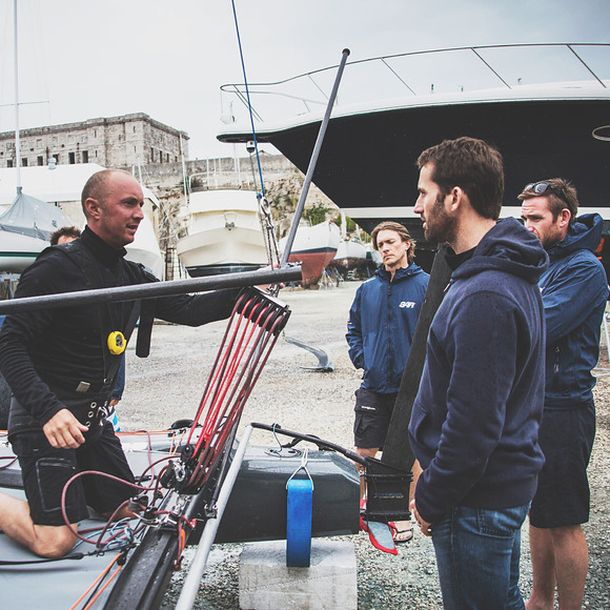 Bermuda will be the venue for the 35th America's Cup. It's a brand new race track for foiling multihulls, and Ben Ainslie Racing (BAR) were the first to test it back in January. It was immediately clear that it would be much more of a strategic and tactical test than the drag-race that dominated the 34th Cup match in San Francisco.

Many valuable lessons were learnt by the sailing team during their January training camp, not least of which was to return as soon as possible to start work on analysing the intricacies of the race course. Sailing Manager Jono Macbeth and new Team Coach Rob Wilson will lead the project to develop a playbook for foiling multihulls on Bermuda's Great Sound.

The sun lifts above the horizon and lights up another, glorious Bermudian day. Sailing Manager Jono Macbeth and Sailing Team Coach Rob Wilson are deep in conversation about the day's sailing plan. “We've just taken on Rob as our full-time coach,” commented Macbeth, “he comes from a high-performance background, racing the old Olympic catamaran, the Tornado, and has coached Extreme Sailing Series winners and Youth World Champions. We wanted Rob because he's got a very analytical mindset, an engineering and sailmaking background and great communications skills – all essential to coaching at this level.”

The rest of BAR's sailing team are busy preparing the boats. The two multihulls are twenty feet long, and both are equipped with a hydrofoiling system that is a very basic version of the one that will allow the America's Cup boat to reach speeds in excess of 50mph. The speeds are more modest for these smaller boats, but more importantly, they are equal. The boats are as identical as it's possible to build them, and so they make a great platform for testing the fastest way around a race track. It's the reason that the team are here for this training camp. They've got work to do reconnoitring the America's Cup course.

However, no one had ever looked at the Great Sound with a view to racing 62 foot foiling America's Cup boats doing speeds that would cost you a driver's licence in an urban area. While charts were quickly unrolled, distances were measured, weather data was analysed and heads were scratched… everyone knew that there would be no substitute for actually sailing the race track.

After the announcement that Bermuda would be the venue for the 35th America's Cup, the BAR sailing team were the first to get sailing and foiling on the Great Sound. They spent over a week at the venue for a winter training session at the end of January, and when they came home, Sailing Manager Jono Macbeth commented:

“We turned up in Bermuda with preconceived ideas about how big the race course was going to be, where it was going to be, the wind directions and strengths. It's not until you're there on the ground that you really get a good feel for what's going on. And one thing we learned was that the race course is going to be pretty small, it's going to be tight, and there's going to be a lot of manoeuvring. This is a sailor's race course, and we knew that we had to get back there as soon as we could for more detailed analysis.” There was a whole lot more to learn – knowledge that would need to be distilled into a playbook for the venue. It was a project for the team's new coach, Rob Wilson to take on. 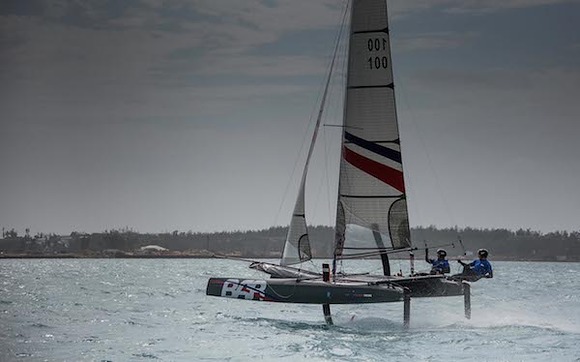 Sailing is almost unique in being a track sport where the track changes every moment of every day. The closest sporting analogy to the America's Cup is Formula 1, and their teams carefully measure every inch of the race tracks that they must compete on; the camber, the bumps, the flat spots, the corners and the straights are all intricately mapped and known. None of this is possible when wind and water make up the arena. The task of understanding the America's Cup race course is more complex by several orders of magnitude than anything faced by an F1 team.

The nature of the Bermuda race course will be determined by the wind speed and wind direction, and the height and speed of the waves. “The team's March training camp is focused on the subtleties of the wind shifts and speed changes, the recurring patterns that will occur in the differing wind directions and course orientations,” explains Sailing Manager Jono Macbeth, after he has finished talking to Wilson. “We start by working with a local sailor to get an over-view of the venue; to gather some thoughts both on what we see while we are there, and how it might be different to what we can expect during the America's Cup month of June. Then we settle down to our own programme of testing.”

In its essence, the complex mass of data boils down to one simple question; in that set of conditions (which must be carefully recorded) which was the fastest route up the race course? And while it's possible to calculate the answer with a sufficiently complete description of the conditions, it's much more effective to have two boats of equal speeds sail the different routes and see who gets to the finish first. Two boats just like BAR's foiling multihulls.

“A lot of our training here will involve starting the two boats on the race course with instructions to go a particular way,” says Macbeth. “Then we see who gets there first. We need to do it plenty of times to check the result is repeatable, and to make sure we understand why one way is faster than any other. These are the perfect boats for the job. Once we start sailing our Cup boats an enormous amount of energy goes into the development of their speed potential. We don't have that distraction here with these two smaller training boats. It's all about the race course.”

Rob Wilson is in charge of assimilating all that feedback, recording the results and developing the playbook. “My job,” says Wilson, “is to make sure that we accurately record the conditions and results of each test, ensure that the result is valid, and that we correctly note any undue or unusual influences.” By the time the first gun goes to start the racing for real, the team's playbook will hold an enormous amount of data. The assimilated knowledge of thousands of man-hours of sailing on the Great Sound will be brought to bear on all the tactical and strategic decisions that will decide the fate of the 35th America's Cup – and it all started here, and it all started this week.