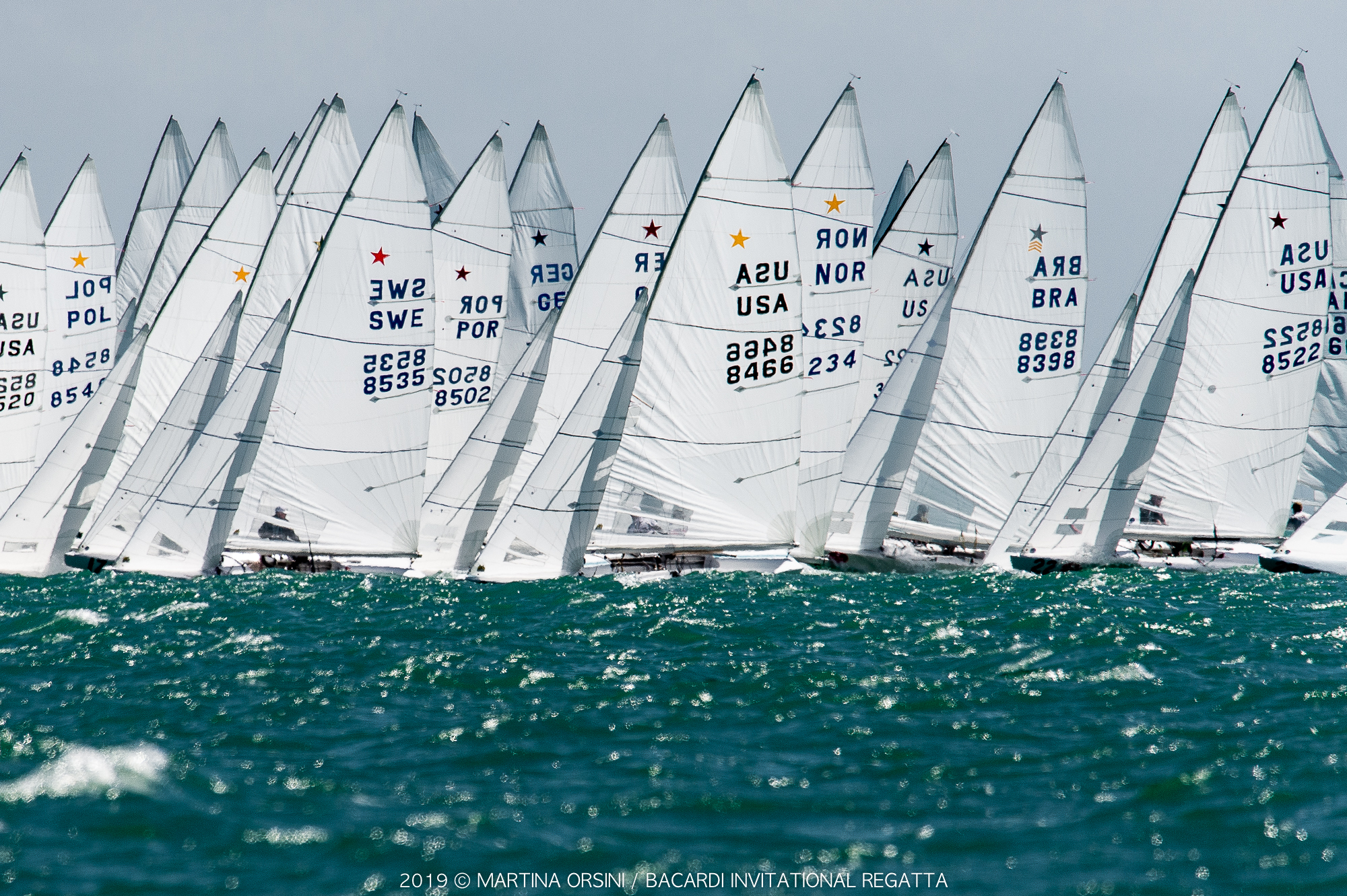 The Bacardi Cup Invitational Regatta is set to take place in Miami from 6-12 March 2022.

The entry list features over 500 sailors from 20-plus nations, showcasing the usual mix of sailing legends, world champions, Olympians and pros lining up against weekend enthusiasts. There are few better venues in the world than Miami in spring, as the essential ingredients of warm weather, reliable breeze, camaraderie and exceptional hospitality ensure sailors flock to enjoy the BCIR. Demonstrating the appeal of BCIR and the world-class competition on Biscayne Bay, entry numbers have bounced back to pre-Covid heydays.

“Bacardi Cup and the Bacardi Invitational Regatta have always been all about the sailors,” commented Eddie Cutillas, Bacardi USA. “For the first time since 2020, we will return to hosting not only our usual top level sailing but also the aprés-sail for which Bacardi is renowned – with nightly cocktail hours, dinners, music and entertainment. After being forced to scale back the events in 2021, we are thrilled to return to a full line-up this year.”

Bacardi is rightly proud of the Bacardi Cup, which lays claim to being one of the most distinguished events in sailing and continues as a landmark event for the Bacardi Rum brand and Bacardi family, who have been active patrons since the beginning. As a fledgling event in 1927 in Cuba, the popularity of the Star Class and Bacardi brand meant the Bacardi Cup was destined for success. Throughout more than nine decades the Cup has never made compromises as it brings together the world’s best all round in a six-day battle for the Bacardi Cup and Tito Bacardi Cup trophies.

“We are delighted to welcome so many sailors back to Miami – we have missed you all,” said Sara Zanobini, BCIR Event Director. “As an event organiser, our aim is to exemplify the unique style of the brand and hit the sweet spot by offering world class racing and legendary shore side hospitality. I wish everyone a fantastic competition on one of the world’s most beautiful and demanding race courses.”

Star Class
The Cup guarantees passion, drama and world class sailing in the revered Star Class. Celebrating its 95thanniversary in 2022, the Cup opens for the 60 boat fleet on 7 March 2022 in the traditional one race per day format, with six races and five to count.

The racetrack will see the majority of the top twenty pairings from last year return, led by favourites and back to back 2021 and 2020 Cup champions Mateusz Kusznierewiz (POL) and Bruno Prada (BRA) who will be on a hat-trick mission.

Denmark’s Jörgen Schönherr and Markus Koy (GER) will be hoping to better their fourth place at the 2021 Star Worlds, with Koy also planning to upgrade on his third with Augie Diaz at the 2021 Bacardi Cup. Paul Cayard (USA) and Frithof Kleen (GER) rank as another impressive partnership, with plenty of Star Worlds podium finishes between them, including a win in 1988 for Cayard and in 2014 for Kleen. Cayard is yet to see his name etched on the Bacardi Cup, whilst Kleen claimed the accolade in 2016 with Robert Stanjek – 2022 has every chance of being their year too.

Amongst the relative newcomers to the Star Class is Croatia’s ace in the ILCA 7 Tonči Stipanović, who picked up Silver in Tokyo before going onto claim silver at the 2021 Star Worlds with crew Tudor Bilic.

Since the inception of the Bacardi Cup in 1927, forty-five different skippers have claimed the illusive trophy. So get set for plenty of action to unseat Kusznierewiz/Prada as the world’s best battle it out for glory and the honour of sipping rum from the revered trophies.

The frontrunner in 2021 was Travis Odenbach who returns in 2022 to partner with some of last year’s crew on David Jannetti’s ‘Very Odd’. Stiff competition in the thirty-nine boat fleet will come from many quarters, including 2020 BCIR victor Paul Ward on ’Eat Sleep J Repeat’, with plenty of British talent on board.

Looking at recent form, Peter Cunningham (CAY) on ‘Powerplay’ finished a strong second at the first Bacardi Winter Series, with Bobby Julien on ‘Dingbat’ taking the win at January’s second event. Both have what it takes to claim a podium finish, as does Britain’s Charles Thompson whose all-star team on ‘Brutus’ came together for the first time to finish third in January.

Winning in Miami is always tricky as teams face the challenging and notoriously unpredictable racetrack and in a fleet packed with talent, including six of last year’s top 10, there is all to play for. The BCIR is the finale of the Bacardi Winter Series J/70 season and, after the first two events, the series points advantage is in the hands of Bobby Julien.

Bora Gulari and his team on ‘New England Ropes’ headline the 27-boat Melges 24 fleet, after their back-to-back wins in 2021 and 2020. Conquering Gulari will require superior talent across all the wind and sea conditions Biscayne Bay will throw at the challenging teams.

Familiarity with the race courses always pays and nine of last year’s top ten return, so expect the usual masterclass of skills, including Travis Weisleder and his team on ‘Lucky Dog’ who finished just  behind Gulari last year and Bruce Ayres on ‘Monsoon’ who finished third. Laura Grondin (USA), President of the International Melges 24 Class, opened the Bacardi Regatta series with a win in December’s first event and returns with the exact same well-oiled team to assert her authority and improve on her seventh place from 2021.

Fresh faces to the USA Melges 24 racing scene include Germany’s ‘Nefeli ‘helmed by Peter Karrie and Drew Freides’ team on ‘Pacific Yankee’ race in Miami on a new Melges 24.

After the class’ absence last year due to Covid-19 restrictions, teams from Canada, Ireland, Italy and the USA contest the 16-boat Viper 640 fleet.

Amongst the favourites are ‘Evil Hiss’ who finished second in 2020 under the expert helm of Mary Ewenson and the Irish entry of Anthony O Leary on ‘Antix’ who finished fourth, and Brad Boston (CAN) whose team on ‘Jackpot’ finished second at January’s second Winter Series Event and fourth at last year’s North Americans. Peter Ill on ‘Caterpillar’ claims the most recent top spot from his second place finish at the recent Viper Winter Series Event in Sarasota.

2022 year marks the largest VX One fleet yet in Miami, with twenty new and returning teams from Canada, Chile, Great Britain, USA and the US Virgin Islands.

Amongst teams to watch are ‘Jailbreak’ who finished sixth at the 2021 North Americans and fourth at the VX One Winter Series in January, and there is every likelihood John Porter’s ‘Far Side’ will again be a force to be reckoned. Porter scored a superb result at his first major regatta, the Midwinter Championship in January, where he overcame some experienced teams on the last day of racing to claim seventh overall out of 35.

Racing was suspended at BCIR last year due to covid, so the honour of the top ranked returning team from 2020 goes to Tim Pitts/Tim Desmond (ISV) who finished in fourth.

69F class
After its inauguration on USA waters at second Bacardi Winter Series in January, the 69F makes its debut at BCIR with an international line-up of teams set to push each other around the fast and furious 10-15 minute races.

Delivering a full carbon high-tech foiling racing machine, capable of speeds up to 34 knots, the 69F is stable and easy to handle even by a rookie crew. The recipe is simple, three or four crew members, pure joy, sustainability and performance.