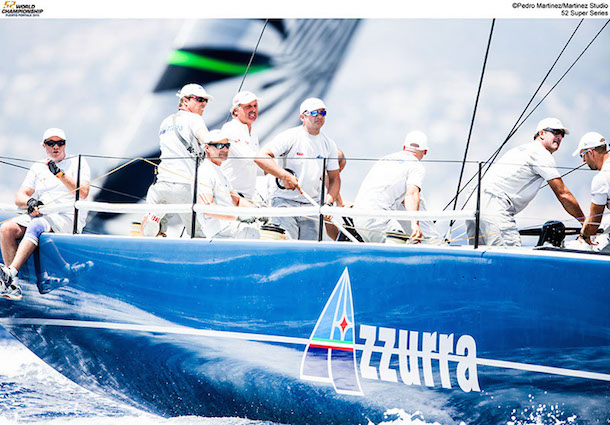 When the 52 SUPER SERIES fleet of 11 TP52s gather for next week’s Mediterranean summer showcase regatta, the 34th Copa del Rey MAPFRE, series leaders Azzurra will be bidding to win their third regatta in a row and the fleet will welcome new American owners to compete on the world’s leading grand prix multihull circuit for the first time.

Azzurra, the emblematic yacht of the Roemmers family which races in the colours of the Yacht Club Costa Smeralda, are on a charge. Winners of the Settimana Delle Boche from Puerto Cervo, Sardinia and the 52 World Championships earlier in July from Puerto Portals Mallorca, the crew which is skippered by Guillermo Parada are riding a wave of confidence and feel especially at home on the Bay of Palma. But the notoriously one sided sea breeze race track will place an unusually high premium on starting and gaining the first beneficial wind shift and charges a proportionately high tariff to those who fail to get off the start line well. Azzurra have proven to be one of this season’s best, most consistent starters but the crew will have to be at their very best, and stay out of trouble to pull off a third regatta win in a row.

Asked if they can win three events on the bounce, skipper-helm Parada replies:

“Why not? We all start with the same chances and will give it everything we have. We have great memories of Palma and some bad ones but we remember every time we come here. The only worry coming to Palma is if you are slow and we have no big worries this season.”

“We are not even thinking of results yet. We are sailing each day if it were the first one of the season. When you start speculating you can only go backwards. We do not look the points yet as we want to win Copa del Rey.”

Talismanic Terry Hutchinson returns to 52 SUPER SERIES champions Quantum Racing, the 2014 defending champions will line up with owner-driver Doug DeVos on the helm and Hutchinson and Ado Stead in the roles of tactician and strategist. The champions were clearly moving in the right direction at the world championships but suffered a poor final day which saw them narrowly dropped from podium in a very close logjam of aggregate points. As the second event of the season to be sailed in this afterguard configuration and with visibly good speed at the World Championships there is every chance the Quantum Racing team can defend the Copa del Rey title which they won last year en route to their 52 SUPER SERIES title.

They may be debutants on the 52 SUPER SERIES but Steve and Heidi Benjamin’s crew which will race their newly acquired Spookie, formerly Interlodge, are hardly newcomers to grand prix racing. But it will be the American Olympic 470 medallist and the team’s first time racing their new boat and the learning curve will be steep for them among the white hot fleet. Their crew includes Peter Holmberg as tactician. Benjamin visited Valencia and sailed a practice race on the boat but the crew will only sail the boat for the first time together when they arrive in Palma.

“We are very excited but guarded in our expectations. We would be happy just to beat a few boats on this occasion. It is a new boat to us and it is our first event. We have several new guys on the team and some that I have sailed with a lot before. It will be my fourth regatta with Peter (Holmberg) who is an old friend.”

Benjamin declared on his departure from the US for Palma.

“I am frightened to death of all of the top teams, the Azzurras and Quantum Racing and so on. Azzurra do seem to be the favourites. We are looking forwards to being in the 52 SUPER SERIES which really is la crème de la crème.”