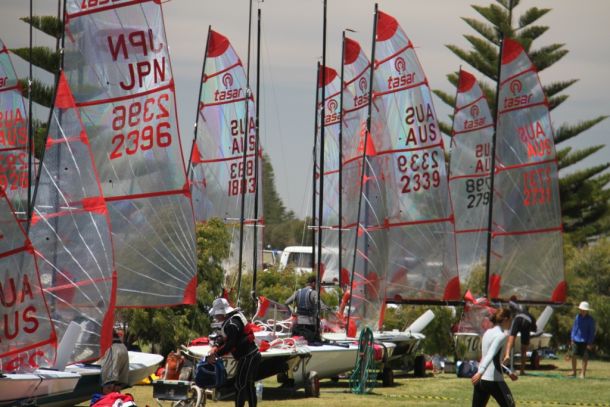 Saturday afternoon was the practice race for the Tasar 2015 World Championships which is being sailed on Geographe Bay, Busselton.

Some of the 114 boats were a bit too keen to start and caused a re-start of the race.  It was initially a light north westerly breeze with sloppy chop which later changed to a strong south westerly with some big gusts and an occasional lull to really test the reactions of the crews.

Heather Macfarlane and Chris Payne, from Victoria, Australia, sailed SMAC into clear air to establish an early lead and built on it to take first place, with second place going to Pete Ellis and Charlotte Birbeck on Positively Undecided who are also from Victoria, and in third place were Scott Olsen and Niko Striega sailing on Escape Boat from Western Australia.

The next two places were Australian boats, then in sixth were Taro Yamamura on Miyako from Japan.  The current World Champions Anthony Boscolo and Haley Lane on Cohete Azul were further back in the fleet and will be hoping for better results from Sunday’s heats of the regatta.

Information and results can be found on the event web site www.tasar2015.com . The event is being hosted by Geographe Bay Yacht Club.