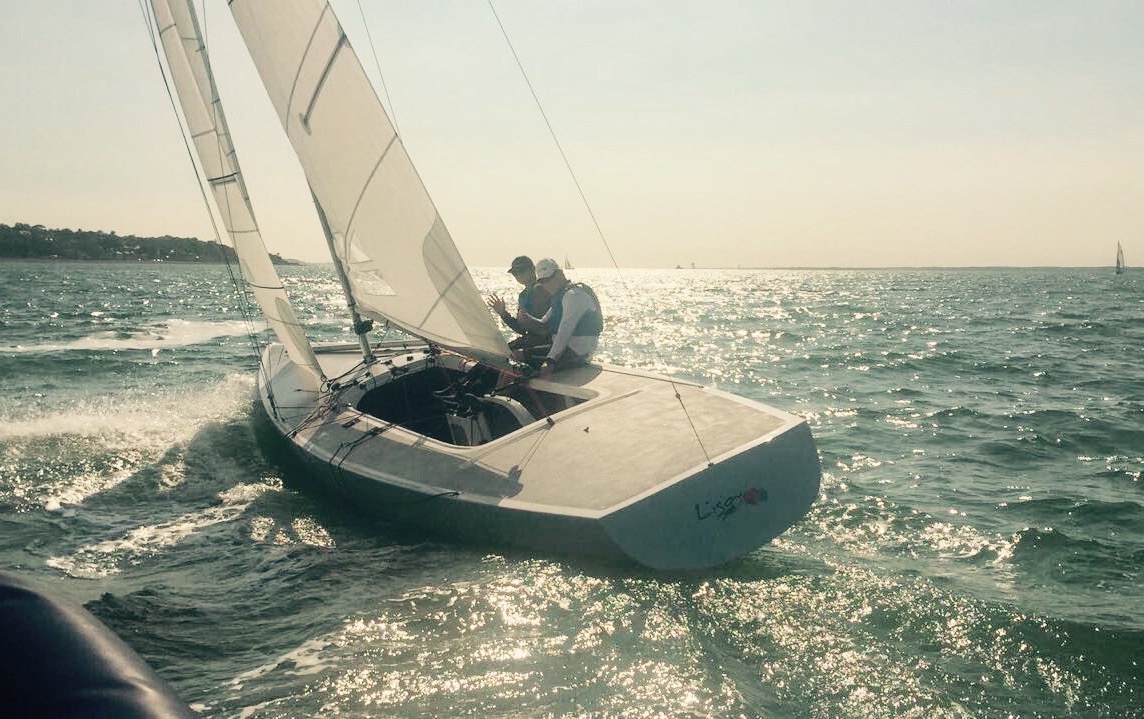 Martin Hill at the helm of Lisa Rose on the Solent off Cowes.

Martin Hill and his crew of Andrew Palfrey, David Chapman and Sasha Ryan are spearheading an Australian assault on the 2017 Etchells World Championship to be held in San Francisco from 22 to 30 September and hosted by the San Francisco Yacht Club.

With registration and weigh-in beforehand, the first two races will take place on 26 September.

So far 51 crews from around the globe are registered to take part. Hill and crew will be joined by nine other Australian crews, including Jeanne-Claude Strong and her crew of Seve Jarvin (whose father Steve will crew for Graeme Taylor), Marcus Burke and Tiana Wittey, who double as Hill’s training partners.

Notably, Iain Murray is among the other skippers in a strong Australian line up.

First, though, the Australians will warm-up in the Etchells Pre-Worlds on 16 and 17 September. Hill and crew are ready. They most recently raced at the Etchells North American Championship in San Diego in mid-August, finishing 14th overall, best placed of the Australians.

Heading into the North Americans, Hill said: “I feel I’m flying into a crash course on big fleet regattas. I’ve dropped 6.5kgs, so I’m comfortable with my weight target and the knowledge that Dog (Palfrey) has prepared the boat as best as anyone can and that Chappo continues to be on fire as a world-class tactician. That puts us on the start line at least in an even position.”

Going into the Pre-Worlds, Hill, a capable one-design sailor says: “A little voice in my head keeps reminding me to have patience and persistence – trust in myself and the crew’s ability. Well that’s the theory. But one quick look at the calibre of the rock stars I am sailing against, one could say ‘tell him he’s dreaming’.

“Lisa Rose (the boat is named for his wife) is my castle. The key is all in our vibe.”

Meanwhile, crew member Chapman says: “It's been a hard slog so far and I wouldn't have it any other way.

“When Martin came to me about his desire to race in this class and to get onto the top step, I had my reservations, given the amount of talent and wealth of experience in this fleet. But we’ve knuckled down and put a plan together, and with Andrew’s help, things are coming together nicely.”

Chapman says they put in a lot of hours last summer as a team, but didn't get to see those rewards, “until we won the New Zealand Nationals and finished second at the Europeans.”

He says it gave the team a lot of confidence going forward. “Although 14th at the North Americans last month doesn't sound that great, it was a real dogfight, probably my toughest event of the year – and we learnt so much – that was our first hit out as a team.

“We currently have a very strong team, but we don't have much time together, so our response to that is a training camp before the Worlds with some very strong teams,” Chapman says.

Sasha Ryan, a talented Olympic class 470 sailor and sister of Rio Olympics 470 Silver medallist, Will, is on the crew for these Championships and they have enlisted past Olympian, Bobby Wilmot (whose nephew Jeremy will race on a USA crew), as the team’s coach.

“Sasha complements the team very well with her 470 and Etchells experience. For us, it wasn't a case of let’s just find the weight, we had to find the best person,” Chapman says.

“I think the Australian fleet has a great chance to take out the Worlds. We are represented by some extremely strong teams, such as Big Fella (Iain Murray), GT (Graeme Taylor), Tango (Chris Hampton) and JC (Jeanne-Claude Strong) to name a few,” he says of some of their fellow skippers who have already made names for themselves.

They all agree that it should be a great week of racing.