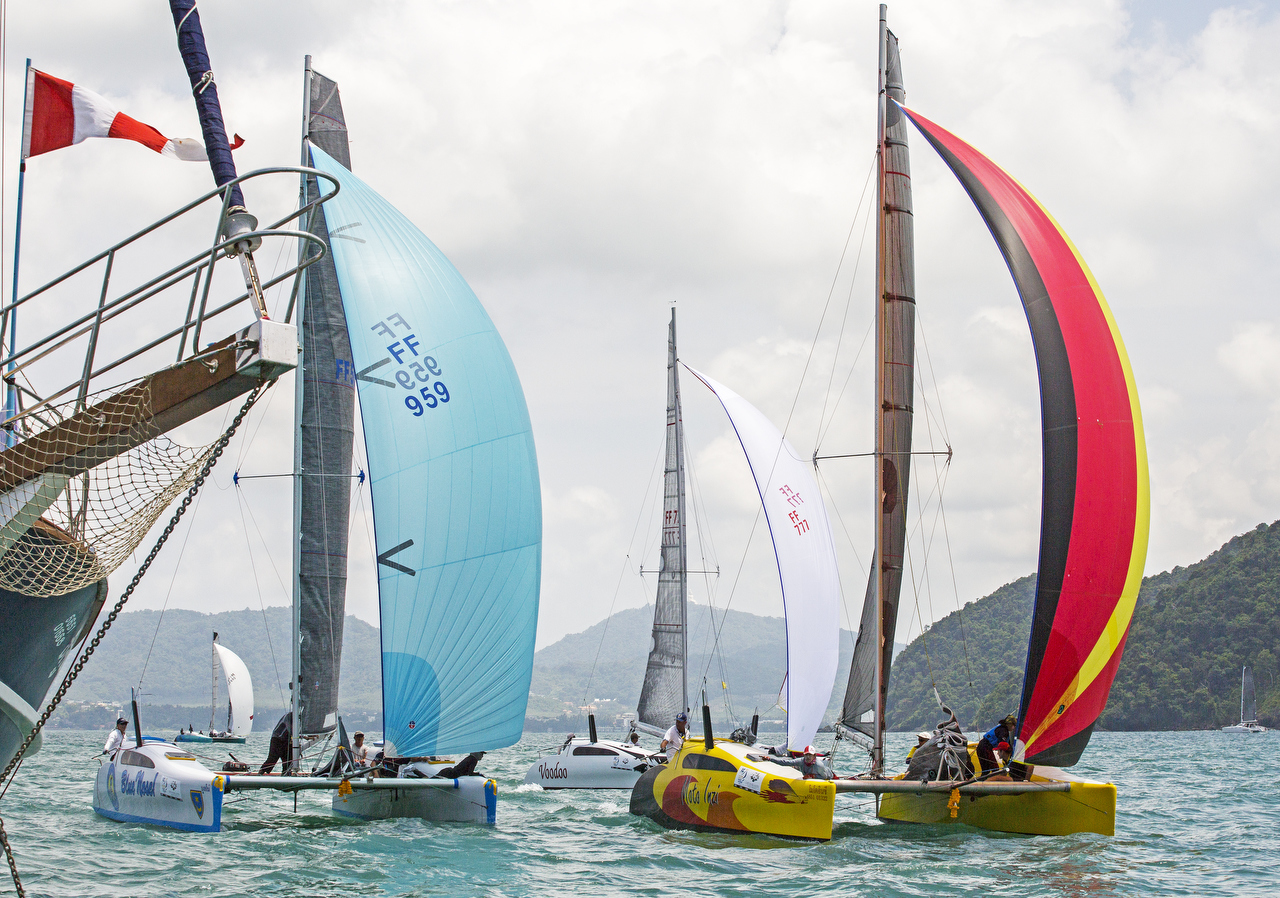 Phuket, Thailand: It looked ominous at dawn on Day 3 of the Cape Panwa Hotel Phuket Raceweek on a glassed-out Andaman Sea – the AP was raised on shore – but was lowered within the hour, as PRO Simon James and team tracked down good breeze to get the fleet going.

Soft but consistent, the 8 knots of wind delivered two races for the racing fleet and one for the cruisers.

Since a second in the first race of the series, Ray Roberts' Team Hollywood (AUS) haven't put a foot wrong; stringing together six wins on the trot and a nine point lead at the top. The fight, however, is on for second place.

Loco (SIN) got the better of the two Sydney 40's in Race 1 placing second ahead of East Marine Emagine (AUS), while in Race 2, the positions were switched. Loco, having now leapfrogged Rerefine (AUS) into third place overall, are two points behind East Marine Emagine and with just one race tomorrow it remains to be seen if the deficit is too much to overcome.

In IRC II the pointscore doesn't reflect how close the racing has been so far. Another two wins today for Phoenix (DEN) and her lead is almost unsurmountable for second placed Sailescapes Farrgo Ladies, however, the margin between the two on corrected time is just seconds – as little as nine seconds in one race.

The all-female crew are managing to keep their Farr 1104 sister-ship, Krabi Boat Lagoon Piccolo (GBR) at bay, and despite Piccolo's win in Race 2 (by just two seconds over Phoenix!), the ladies have a comfortable lead going into the final day tomorrow.

It was all change in the Cruising class today. A long passage race into Chalong Bay, around Bon and Lone islands before returning to the finish and it was Beaux Esprits (AUS), skippered by Keith Garry – who has competed in every Cape Panwa Hotel Phuket Raceweek to date – which won line honours and corrected out for their first win of the series.

A second place for Lady Bubbly (AUS) keeps them top of the overall standings while a third for Who Dares Wins (GBR) today leaves them tied in third overall with Beaux Esprits.

A shake-up in Multihull Racing today saw Asia Catamarans Hurricane (AUS), finish the day with a 1,3 scoreline. Two more second places for Thor (GBR) and they narrow the gap to three points, but with just one race tomorrow it looks too much for Thor to bridge.

Just 27 seconds separated Java, Phantom V and Galeforce in Race 1, a sign of the close racing between the Stealth cats, and it was Java who had the edge to finish third.

Meanwhile, Phantom V have quietly been making their way up the standings and finished today with a win the final race and with that move into third overall, one point ahead of Java – setting things up for a final day showdown.

The majestic cruising catamarans have put on a display of grace and speed this week, handling the short courses well while revelling on the longer courses, and today it was a win for DaVinci (AUS) who now have a two point lead over Mojo (AUS). Another DNS for Siesta (AUS) see them rooted to the foot of the table.

The longest winning streak at Cape Panwa Hotel Raceweek looks set to continue as Twin Sharks (GBR) added two more bullets to her undefeated pointscore this week, and with that, looks likely to make it five consecutive wins in the Firefly 850 class (2013 – 2017).

As impressive as that record is, the story of the day is Mil Grace (JPN) – charted by a Japanese crew, this is their second time at Cape Panwa Hotel Phuket Raceweek and they have been there or thereabouts with a third place their best finish to date.

Today, the Japanese went one better with a second place in the final race and move into third in the overall standings behind Blue Noze (GBR) whose 3, 4 scoreline today is enough for them to hold onto second overall.

A sign of the close racing, 12 seconds separated second to fourth places in Race 1 today.

After a relatively slow start on Day 1, Java Racing (GBR) have turned things around in the Pulse 600 class making a remarkable comeback winning five races in a row against tough competition, and now sit top of the standings. With a 3, 2 today, Multihull Solutions H30 remain second in the overall standings ahead of SuDu Red (AUS).