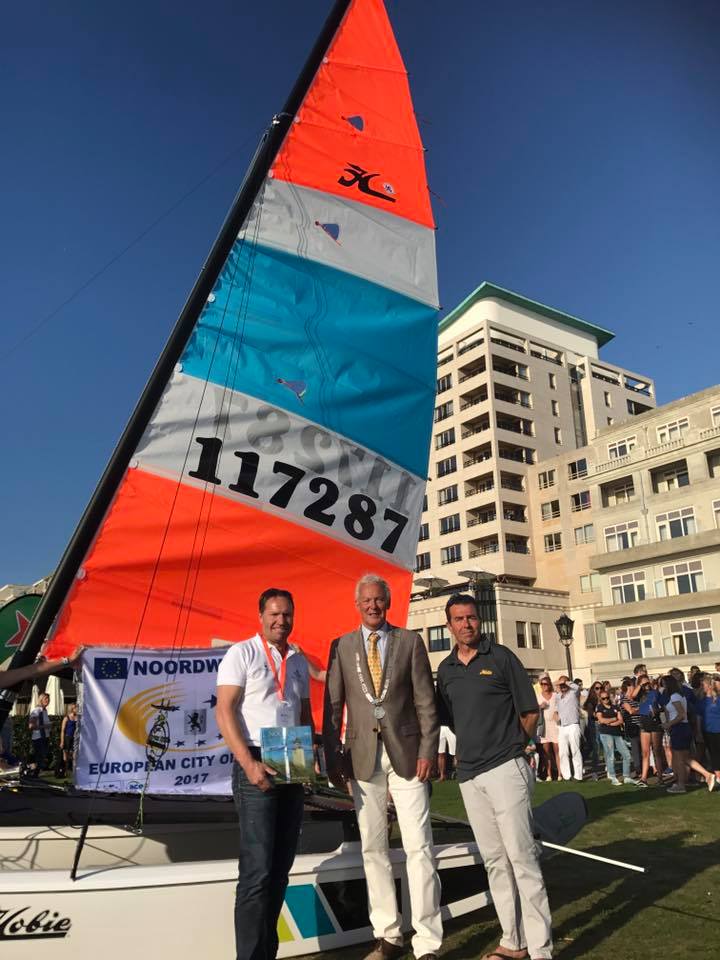 A beautiful sunny second day at the Hobie 14 and Hobie Dragoon World Championships with the Hobie 16 Spi Youth Europeans at Noordwijk, Netherlands, the day starting with a gentle side-offshore south/south-westerly breeze.

Unfortunately the wind was to drop further during the course of the day and along with the strong current, challenged the sailors.

The Hobie 14 class started late, due to several attempts to start with the strong current and shifting breeze. The starting signal for race one was at 12:15 and only one race was sailed today.

Yesterdays’ winner, Georgia Warren-Meyers, did not finish within the time limit. With the discard now in place she still maintains the overall lead of the championships.

Tonight the Hobie 2017 Multiworlds and Europeans event is officially opened by the Mayor of Noordwijk, at the Grand Hotel Huis ter Duin. Officials from the International Hobie Class Associations and the chairman of the host to the event, Cees Rodenburg of Zeilvereniging Noordwijk were also present.

Sailors of all 24 participating countries will present their flag in a parade. Tonight the public will be introduced to the Hobie 16 class sail, to be used by the 56 sailors in the gold fleet. A very special moment, since this is the first time in history that the sail is disclosed before the actual race day!

Weather for tomorrow: very light offshore winds in the early morning. During the day the wind will shift to side shore from SW and increase to moderate winds. Ample of sunshine in the morning, with some clouds and perhaps some rain in the afternoon.