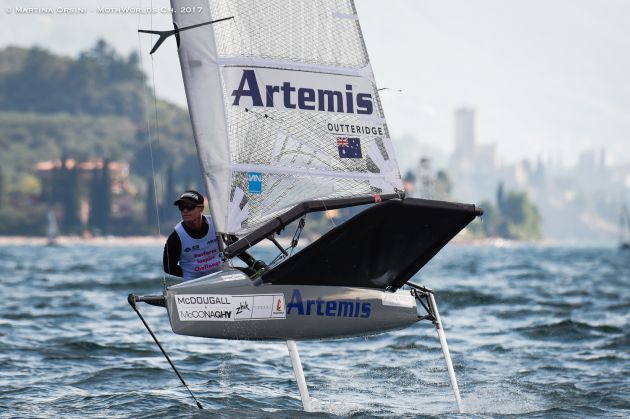 For day 2 of the Italian Moth Series, the pre curser to the McDougall + McConaghy Moth Worlds, Lake Garda delivered fantastic Moth sailing conditions with spectators enjoying a grand stand view of the action from the Fraglia Vela Malcesine club foreshore. The Yellow fleet was sent out for a 1300hrs start in warm afternoon sunshine and flat water. The breeze continued to swing between 200 – 240 degrees, delaying the start for about an hour.

When it did settle on 205 degrees it was blowing around 12 – 15 knots straight up the lake with patches of light wind on each shoreline. Race 4 for the Yellow fleet was away at the second attempt under black flag. The majority of the fleet headed out on starboard tack directly towards the club house. First to round the top mark was regatta leader Paul Goodison (GBR) with Tom Burton (AUS) following and Francesco Bianchi from Italy turning in third to great cheers from the local supporters. Josh Mcknight (AUS) recovered from a bad start to round in the top ten.

On the second lap Goodison displayed his superior speed, staying in the pressure and extended away to win by a big margin from Ben Paton (GBR).

By the time race 5 was started the breeze had increased to 16 – 18 knots in streaks in the middle of the course. After a clean start, it was the unstoppable Brit Paul Goodison again leading Iain Jensen (AUS) with Josh Mcknight just to leeward. Mcknight got through Jensen downwind to snatch 2nd and the Italian mob again finishing strongly in a cluster. This time it was Francesco Bianchi in 4th, Francesco Bruni in 5th and Carlo de Paoli Ambrosi in 7th.

As race 6 started for the yellow fleet there was a hint of white water on the course providing champagne sailing conditions for their final race of the series. Without sounding monotonous it was another horizon job for the British Gold medallist ‘Goody’ who kept in the pressure all the way round the race track. Another good performance for the 2012 World Moth Champion, Josh McKnight (AUS) as he ploughed through the fleet to take another 2nd. This time the Italian battle went in the favour of Carlo de Paoli Ambrosi with an excellent 3rd. Iain Jensen (AUS) finished the day with a solid 4th and Italian Francesco Bianchi in 6th.

The red fleet was sent out just before 1600hrs for the late afternoon session just as the breeze was reaching its peak of the day at around 16 – 18 knots in patches. Race 4 for the red fleet was a real crowd pleaser. Off the start line came three top champions three abreast hurtling up the middle of the course. Rob Greenhalgh (GBR), Pete Burling (NZL) and Nathan Outteridge (AUS) grappled for the lead with places changing throughout the first lap.

Outteridge powered downwind in the lead closely followed by Burling and Greenhalgh, locking up rounding the gate with a big plume of spray. Scott Babbage (AUS) smoked past Greenhalgh upwind to take third at the windward mark. The last downwind was a real flyer, Outteridge held firm to take the gun but drama for Burling as he locks up his rudder and face plants one gybe from the finish line. Rob Greenhalgh chose the Western side of the course and found pressure to cross in 2nd and Babbage third. Burling recovered to cross 4th but shortly after broke his mast to end his racing for the day.

Race 5 for the red fleet followed shortly with a few retirements as conditions reached their peak. This time it was Kyle Stoneham (GBR) who got a jump on the fleet with a port tack start to cross the fleet. Kohei Kajimoto also had a dream start. Tom Slingsby dropped down to almost take out the windward wing of fellow Australian Nathan Outterdige as the pin end fleet headed for the shore.  But it was not long before the flying Brit Rob Greenhalgh had closed both down for the lead. These three held the lead until the very last leg where Kajimoto and Outteridge came to the finish line on starboard gybe and threw the boat across the finish line in a hand break turn just clear of Stoneham who had to ditch having just got a bow sprit across the line.

As the final race of the day started for the red fleet the early evening breeze started to fade and soften back to 10 knots. Again it was the usual suspects, Rob Greenhalgh (GBR) leading Nathan Outteridge (AUS) with Western Australian Steven Thomas having his time in the sun. Australians Scott Babbage and Tom Slingsby were up there with the leaders. This was the way things stayed until the finish.

Once the two fleet results had been combined it was dominance by the two British sailors with Paul Goodison counting 5 bullets and dropping a 2nd to win the Italian Series with 5 points. Only two points behind Rob Greenhalgh takes second and Nathan Outteridge third with 13 points. Josh Mcknight sailed a consistent series for 4th and Tom Slingsby a solid 5th.

The Moth fleet now has a lay-day for registration and measurement formalities in advance of day 1 of the McDougall + McConaghy Moth Worlds on Tuesday 25 July.

There is, however the small matter of the Veneri Bangin the Corners Cup which is an invitational knockout series which has become a feature of past Moth Worlds. Previous winners are Pete Burling, Josh Mcknight and Iain Jensen. Weather permitting this will take place from 1400hrs.