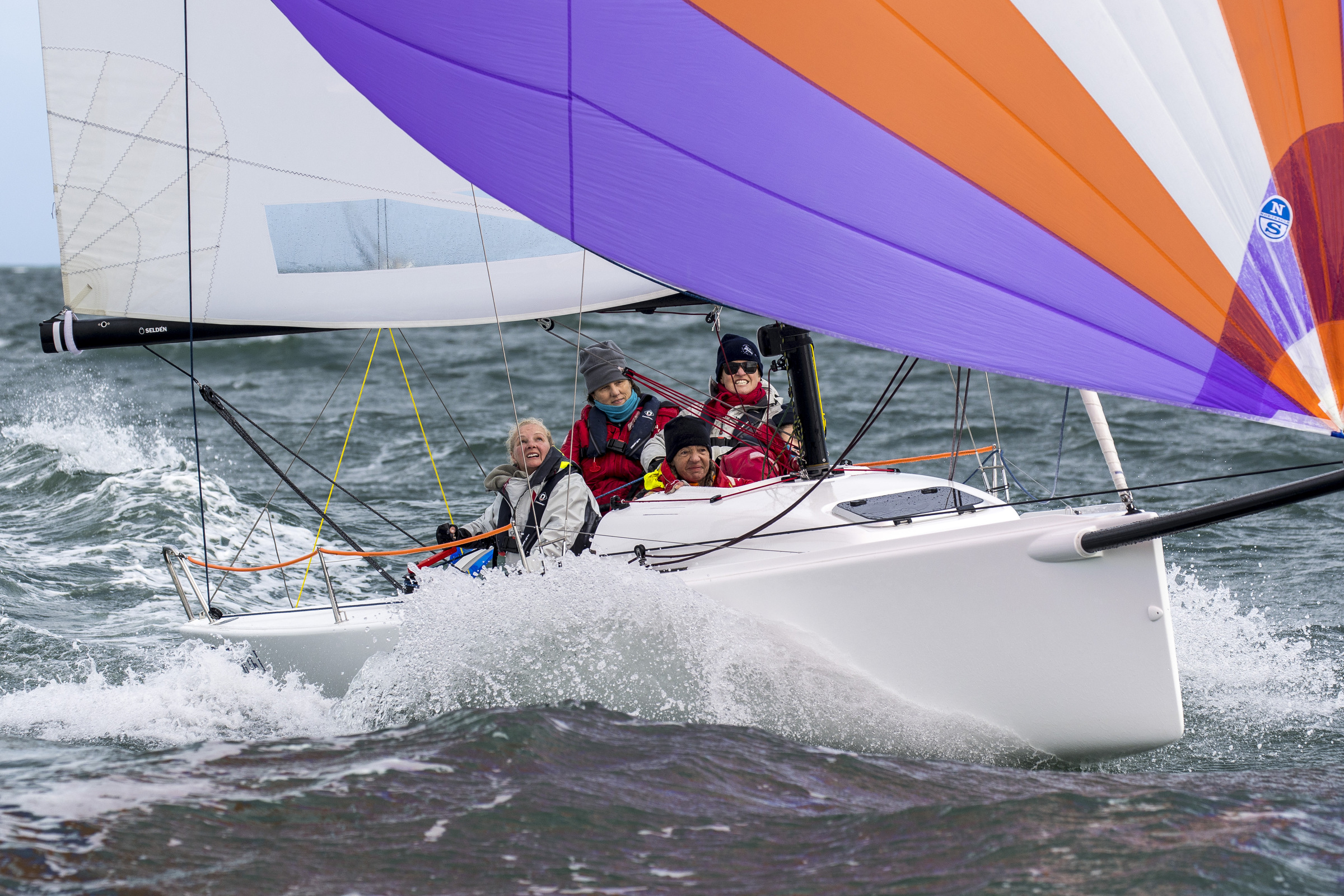 Tracy Richardson (NSW) and crew extended their Division 1 lead at the Australian Women’s Keelboat Regatta (AWKR) this afternoon and with just a day of racing remaining, are looking unassailable in the Royal Melbourne Yacht Squadron (RMYS) hosted event.

Richardson, who took up sailing just seven years ago, is at the top of her game and used Race 4, a windward/leeward also sailed today, as her drop at the 30th running of Australia’s premier all-women regatta.

Triple Olympian, Karen Gojnich and her crew from Royal Sydney Yacht Squadron, are prevailing at the top of the Division 2 leaderboard from the local boat. Gojnich is sailing Madness, the J70 she trailered from Sydney. However, she discovered today there isn’t much between the three J70s in the fleet.

The Sydney sailor was beaten by fellow RSYS member Sarah Ladd’s team on The Jackal in Race 4, while local sailor, Monica Jones won Race 5 with the brand new Sequel.

“I was so in the zone today,” a pleased Jones commented. “The three of us had great tussles, especially at the finish lines,” she said after sailing Race 5 cleanly. “It was great to get a long race in. It’s exhilarating racing and a great advertisement for the J70s,” Jones said of the day’s final race on Port Phillip.

Gojnich said: “It was a pretty wild day in terms of breeze fluctuating between 14 and 20 knots along with a rolling swell. Unfortunately, we broke the start in the first race, but realised straight away, so went back. We had our work cut out for us to get back into the race.

“Today was bit steadier and we had some screaming runs. We hit 15 knots downwind, which was pretty exciting. We had some great racing with the J70s today. We were all in touch with each other. The Jackal won the first race, and Monica won the second – she went to the right mark and we didn’t… It’s just one of those things.

“It was fun day from the J70s point of view, and great long downwind racing. Lou (Hutton) is doing a great job as Race Officer. The start lines are very good and we’ve had two good solid days of sailing,” Gojnich ended.

As conditions were not as harsh as predicted last evening, Hutton sent the 24 all-female teams on a short windward leeward race followed by a longer race. Once again, the day was icy cold, but not a patch on the arctic blasts that blew through Melbourne last evening. The day started an ominous grey, but by lunchtime the sun had peeked through the clouds, a welcome relief.

In the S80 division, Cath Beaufort is clinging to the top of the leaderboard with Up ‘n Go. Despite a second place and a win, the Royal Yacht Club of Victoria crew on Beaufort’s S80 remain just one point ahead of the Tanya Kelly skippered Merak, from Royal Queensland Yacht Squadron. Tomorrow will be the decider.

Sarah Clough, daughter of AWKR founder, Gai Clough, is in third place with Georgia, but nine points off the lead.

Crews at the regatta are grateful for sponsor Doyle Sails Victoria. Blake Anderson arrives each day after racing and collects any damaged sails and repairs them free of charge. They are duly returning the next morning, ready to race. It does not get any better than that.

Racing concludes tomorrow when the winners of the various categories will be announced.