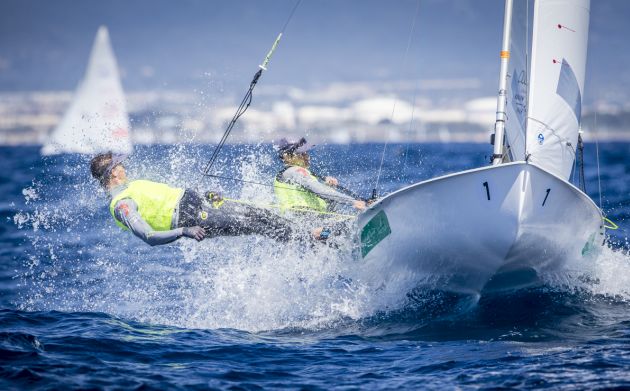 It’s high summer in Europe and racing starts at the 2017 470 World Championship in Thessaloniki Greece, 300 km north of Athens on Monday next, 10th July.

There is a strong Australian presence, six crews in all and the media spotlight at this event will focus on Australia’s Mat Belcher, one of the most successful skippers in the Olympic class 470 (Men’s two-handed dinghy), with his talented crew Will Ryan who are looking to regain their World Championship crown.

Belcher won 470 Olympic Gold in London 2012 with Malcolm Page and Belcher and Ryan took Silver at Rio 2016. Backing up for yet another Olympic campaign, the Australian duo started their 2020 journey with a win at the Sailing World Cup in Melbourne last December. They then won against a very strong World Cup field in Hyeres (FRA) in April and in Kiel (GER) in May and in between were leading at the 470 European’s in Monaco when they suffered a freak forestay failure and finished third overall.

After a practice day on the Bay of Thessaloniki today, Belcher, six times World Champion gave this evaluation of the international Men’s 470 scene.

“In this first of four years leading up to Tokyo 2020, almost all of the top ten teams have continued. Going into this event, the Greek team Panagiotis Mantis and Pavlos Kagialis, the 2017 World Cup winners and Rio Bronze medallists, sailing in their home waters are definitely amongst the favourites. They have been campaigning intensively since Rio. Miami, Palma, Hyeres, Europeans and World Cup Finals, they are really going for a strong push this year.

“The Americans, Stu McNay and David Hughes, Rio fourth placed, 2017 Miami World Cup winners, now being trained by Australian 470 Beijing 2008 Gold Medallist Nathan Wilmot, are strong contenders. I thought they had a very good chance for a medal in the Games and they are improving all the time, so will be a big threat here.

“There has been a strong surge in new young teams. We have already seen that the Swedish guys, Fock and Dackhammar, the 470 European winners and the Japanese and the young Austrians in the World Cup Final too, the young guns are pushing the older players and that includes us.

“It’s going to be hot and light here in Thessaloniki next week as it is now. Traditionally we’ve struggled a bit in the lighter conditions but we did well at the Europeans in Monaco in the light wind races so we shall see.

“After a disappointing third in the 2016 World titles in Argentina and an Olympic Silver medal in Rio we are looking to bounce back. We are happy with our results so far, this year. We are taking a different approach in this campaign, spending a little bit less time on the circuit, more in training and being a bit more selective with the events. We are certainly looking forward to this event, it’s another step on the road.”

Belcher is working hard in Australia to grow the 470 scene and in their first international season two young members of the Australian squad, Chris Charlwood and Josh Dawson, will join the Australian top guns on the Greek start line, buoyed by their eighth place in Kiel.

The Australian Women’s 470 scene is certainly healthy with increased support from the Men’s squad. Rio Olympians Carrie Smith and Jaime Ryan, 15th at the Games, have teamed up again. They were in medal contention going into the final day of racing in Kiel (finishing fourth overall) and are looking for regular podium placings in the seasons ahead.

Carrie Smith commented today, “Jaime and I are excited to get back out on the international stage together. For us, Kiel was a warm up event, we were very happy to see constant improvement and our team work coming back together.

“The World Championship is always a tough event but we are prepared, we are a strong team and we support each other all the way, so we will go out there and sail as hard as we can.”

They will be joined by three more Australian 470 Womens teams in Greece. Nia Jerwood and Monique De Vries, who were fifth placed in Kiel along with Dana Tavener and Katherine Shannon, and Shellee White and Amelia Catt.

All this week the Australian squads have been sailing the Championship courses on Thessaloniki Bay. “It’s all about exploring the conditions,” says coach Victor Kovalenko. “An exciting week ahead for both our Men’s and Women’s teams, as we look towards Tokyo 2020.”

Racing at the 2017 470 World Championship starts on Monday 10th July and will finish with medal races on Saturday 16th July 2017.