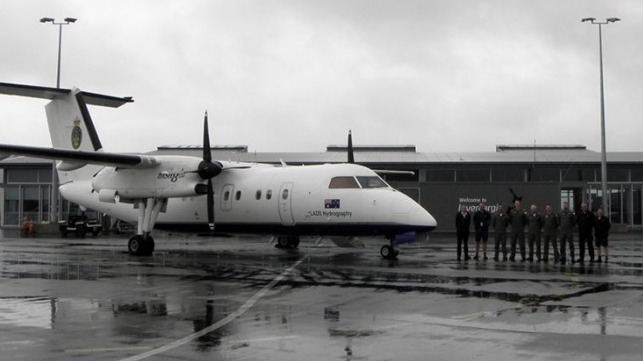 The Royal Australian Navy is gathering data to update Sub-Antarctic nautical charts with the deployment of its Laser Airborne Depth Sounder (LADS) Flight.

The plane is currently deployed to Invercargill in New Zealand to undertake survey operations over Macquarie Island, a 34-kilometer long World Heritage listed island that lies approximately halfway between Australia and Antarctica. Macquarie Island is part of Tasmania and hosts an Australian Antarctic Division research station.

The aim of the survey is to improve knowledge of potential dangers to ships visiting the island, with a focus on the area surrounding the station itself.

The LADS aircraft is a modified Dash 8-200 fitted with a laser system to measure the sea floor depths in coastal waters. The Royal Australian Navy’s LADS capability is unique among bathymetric LiDAR as the Dash 8 gives the extended range required to reach remote locations such as Macquarie Island. At a distance of 650 nautical miles to the SSW of Invercargill, this extended range is a necessity.

Executive Officer, Lieutenant Cheyne Colley, said the improved data will be used to update the existing nautical charts. “The Royal Australian Navy has responsibility for charting approximately one-eighth of the world’s surface, including much of the Southern Ocean.”

The LADS flight will fly as many as eight sorties from Invercargill, with each sortie lasting up to seven hours. When conducting survey, the aircraft will fly at approximately 600 meters, with the LASER emitting through a special window in the belly of the aircraft.

“The unit is unique to any Navy in the world. The technology was developed in Australia and uses a scanning laser which is mounted in the aircraft to collect hydrographic survey data and depth information,” Colley said. “The survey system employed by the LADS Flight is particularly suited to coastal and dangerous reef areas where it would be less safe for our survey ships to operate.”

The LADS Flight is based in Cairns, Australia, and can survey more than 40 square kilometers per hour and depth of more than 50 meters in good conditions.