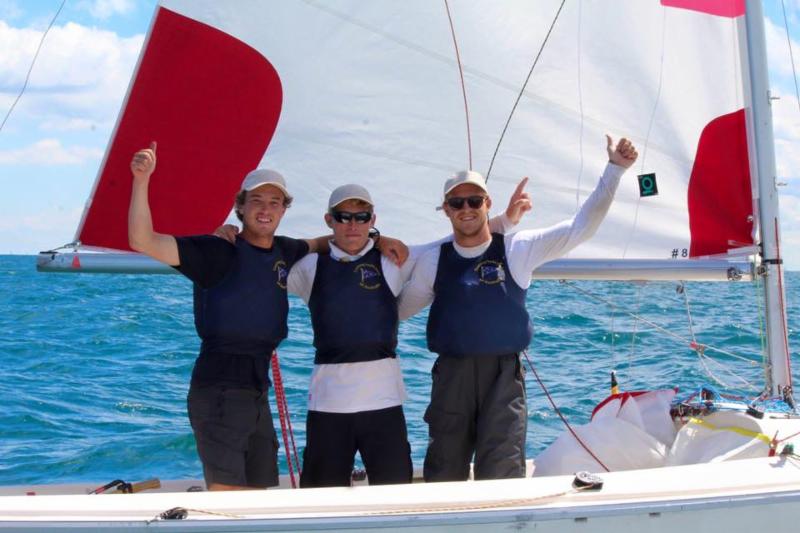 Harry Price (AUS) and his Down Under Racing team of young guns, Ben Robinson and Murray Jones, won the Chicago Grand Slam at Chicago Yacht Club. Price swept both the Semi-Finals against Peter Holz and the Finals against local favorite, Steve Lowery, with an impressive string of six consecutive victories.

The double round robin was sailed on Friday and Saturday in a variety of challenging conditions, including a spattering thunderstorms and big wind shifts. After fourteen flights, the scores showed just how tight racing was at the top: first and second place were tied with ten points, and third and fourth were tied with nine points. Going into the Semi-Finals, it was anyone's game.

As the highest finisher in the First Stage, David Storrs earned the right to select his opponent for the Semi-Finals. Storrs made the ultimately fatal decision to choose Steve Lowery with friendly fighting words: “Lowery has beaten us a few times here before, so we're looking to take some of those back.

Conditions mellowed for the third and final day of racing when the winds clocked around to the north at 13-15 knots, and died throughout the day. The course was set offshore to avoid the Air & Water Show traffic; though, the planes still buzzed overhead. Lowery was on fire during Friday's second round robin, winning all but one match, and his streak continued today against Storrs in the Semi-Finals. Price also sailed clean and fast to a swift 3-0 victory over Holz. Lowery and Price were on to the Finals.

Holz and Storrs were then pitted against each other in a first-to-two points Petite Finals. Holz won the first race by a large margin; then Storrs took the second win. Then the third match was do-or-die for both teams, and was the most exciting match of the day. Holz received a penalty in the dial-up, but started just ahead. The penalty didn't faze Holz, though, as he killed his penalty upwind and still led at the windward mark with Storrs close behind. Both downwind legs were full of action, and just before the finish it looked like the match could go either way. Ultimately Holz made the last move, wiggled free of Storrs' control and gybed to the finish. With two wins, Holz finished 3rd place overall with Storrs in fourth.

In the Finals, Price's young team had slightly better boat speed than Lowery and made very few errors. Twice the team started behind and made up for lost time by finding more velocity on the tricky racecourse. In three civilized and clean matches, Price defeated Lowery 3-0 to take the overall regatta win. Price's team graciously thanked Chicago Yacht Club's Race Committee for “some of the best race management they've ever seen.”

The next stop in the Grand Slam Series is the Detroit Cup at Bayview Yacht Club, with racing starting on Thursday, August 25 and proceeding daily through Sunday, August 28. Nine teams will be competing, including three skippers from the Chicago event. The champion of the US Grand Slam will be crowned in Detroit, and will receive an automatic invitation to the oldest match race event in the US, the 2017 edition of the Congressional Cup next spring in Long Beach, CA.