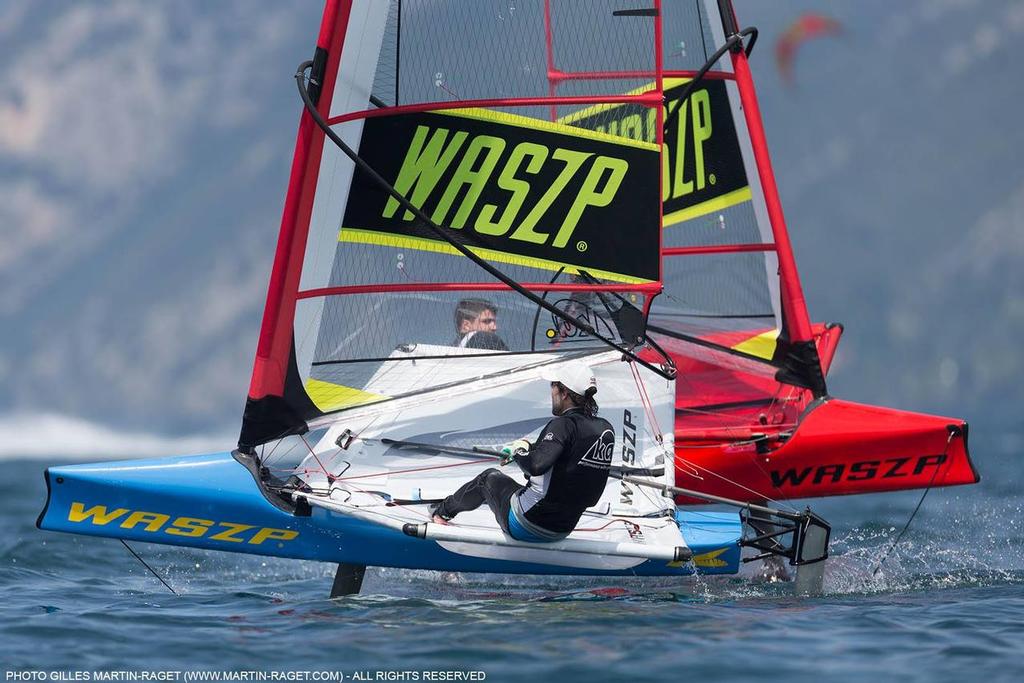 Day 3 of the International WASZP Games run by Univela Sailing Club at Campione on Lake Garda in Italy, was blessed by perfect sailing conditions as the afternoon Ora filled in bang on time at around 1400 hrs.

In the morning the WASZP Games team trialled some new formats of racing with a short Slalom Course and some Drag Racing using reaching legs. As the wind was quite soft, marginal foiling conditions meant that the lighter sailors were quickest to get up on the foils and around the short course.

Special mention goes out to two Swiss WASZP sailors, 19 year old, Guillaume Rol and 17 years old, Max Wallenberg, both from Société Nautique de Genève. They both gave the pros a run for their money.

After lunch the afternoon Ora kicked in bang on schedule for two more absolutely fantastic WASZP Championship Series races to leave the inaugural International WASZP Games title to be decided on the final day.

Race 7 of the championship started in fabulous foiling conditions, about 15 – 16 knots from 200 degrees for a two lap race. The majority of the 53 WASZP’s flew off the start line in a frenzy.

This time, regatta leader Harry Mighell from Australia tacked early at the committee boat end and quickly established a lead right in front of the Univela Sailing Club in Campione. But on lap 1, Dean Souter (AUS) rounded just in front of Harry and Reed Baldridge (USA) with one of the young Norwegian lads, Alexander Hogheim flying round in the top group.

Harry Mighell was able to soak downwind inside Dean Souter and gybe inside him to snatch the lead by the bottom mark.

Back upwind, Dean Souter dropped off the foils momentarily allowing Reed Baldridge to get past to challenge Harry Mighell. Mighell and Baldridge went head to head in a tacking duel at the final rounding of the windward mark, rounding bow to stern and sped off downwind.

Behind them, Bruce Curson from Wakatere BC in New Zealand was enjoying the windy conditions to move up to 4th and young Joan Costa from Spain in 5th.

On the last downwind the drama unfolded as Mighell again sailed low to maintain the inside track, but Baldridge suffered a bad gybe and found a wind hole to lose 2nd to Souter.

Approaching the finish line Souter was rapidly closing in on Mighell with 50 metres to go when he face planted his WASZP into the lake. Despite being super quick to get his boat up, he was low riding with Baldridge rapidly breathing down his neck.

Souter did get his boat up and accelerating, but the awkward angle of the short finish line meant both sailors plunged their bows over the line capsizing simultaneously. Baldridge was judged to have just pipped Souter for 2nd. Bruce Curson and Joan Costa finished 4th and 5th a boat length apart. Some great speeds as the WASZP’s whistle past the committee boat.

The kiwis Marc Orams and Glen Sowry seemed to be enjoying a bit more breeze. As a master of the WASZP fleet and a very experienced sailor, we asked Glen what was the appeal of the WASZP for him:

“My passion has always been dinghy sailing, I was in the same year as Russell Coutts with P Class dinghy’s, then I did all the Olympic 470 stuff, right through to Americas Cup and Whitbread Round the World Races.”

“Interesting in NZ there are a lot of guys who are my contemporaries, who have been very good dinghy sailors back in the past, can still sail reasonably well and have been just captivated by the foiling gig. The idea of a one design foiling boat is just perfect for people like us.”

“We had the New Zealand WASZP Nationals earlier in the year and the top two sailors were outstanding youth sailors who adapted to the WASZP like a duck to water, but a lot of the other guys in the top 10 were guys in their 40’s and early 50’s who have been really good dinghy sailors.”

A short break, and back for the second and last race of the day at 1600 hrs in the glamour afternoon conditions. The race course crowded with a lot more support and spectator boats enjoying being on the water in the afternoon heat.

Dean Souter was well over at the pin end of the start and had to go back. Otherwise, it was a good start for the majority of the fleet, yet again wanting the right side of the course.

Kohei Kajimoto who sails at Black Rock SC in Australia, went for the port tack start, ducking sterns on his way, to get to the shore first and tack for the top mark. Kohei led lap 1 from Harry Mighell weaving around downwind. Bruce Curson again up in the top group, Reed Baldridge going well and young Jack Abbott from Sorrento, Australia back to his best chasing fast.

Again a whole cluster of moths whistling downwind with smiles all over their faces. The back end of the fleet was concentrating really hard on their foiling gybes, most had only spent a few days in the boat before this regatta.

Down to the finish line for the second time, it was Harry Mighell attacking the leader, this time Kohei Kajimoto, by sailing lower angles. Yet again he pulled it off with the inside track at the final mark. It was now just a short downwind sprint to the finish, but alas more drama.

A wind shift meant the last leg turned into a broad reach and Mighell came off the foils. Kajimoto glided past to windward but had to sail a high angle to maintain foiling. He took Reed Baldridge with him on a shy reach away from the finish line.

Mighell remained low riding until about 50 metres from the line when he popped back up on the foils to cut off the two reaching WASZP’s to regain the lead and take his second winning gun of the day.

In the scramble to the line, Kohei Kajimoto finished half a boat length ahead of Reed Baldridge. These three finished minutes ahead of the rest of the fleet after the big shift took effect. Tristan Brown from RFBYC in Perth, Australia floated across the finish line in fourth from Bruce Curson in fifth.

With only one more race scheduled for the final day, Harry Mighell extended his lead on 11 points. Reed Baldridge remains hot on his heels in second on 15 points. Third is Kohei Kajimoto on 27 points.

Sailing an excellent first WASZP regatta Joan Costa from Palamos in Spain is in fourth overall with 38 points and leads the under 18 year youth category. Joan believes his recent experience gained from sailing in the F18’s has come in handy at this regatta.

“I have only sailed the WASZP about 15 times before this regatta but I have raced cats. In the recent F18 Worlds I was second youth and 13th overall. The change from the F18 is only little for me, they are both fast boats. The main thing I like about the WASZP is it just fly’s!

Speaking of speed, the Speed Demon of the day was the flying kiwi Bruce Curson who registered 21,8 knots. Bruce finished with his best results of the championship, 4th and 5th to sit in fifth overall.

In the battle of the girls, there is a flutter of female WASZP’s in consecutive positions in the overall classification. Sara Winther from New Zealand is a few points ahead of Melissa Kalicin from Antigua and young Foss Fredrikke from Norway.

There are seven sailors using the smaller 6.9m rig racing in the Championship Series. All 53 WASZP’s sail together but first of the smaller rigs is 15 year old Nicolai Jacobsen who is part of the Foiling Norway group. Nicolai is in 18th place overall.

There are a generous group of 10 Masters (45 years+), sailing the WASZP Games. This category is led by New Zealander, Marc Orams who is in 13th place overall.

Only one race is scheduled on the final day of racing to establish the first International WASZP Games champion. However, a second discard comes into play after the full 9 races are sailed so it is still all to play for. There will also be a Handicap Race on Saturday, which is not part of the Championship Series.