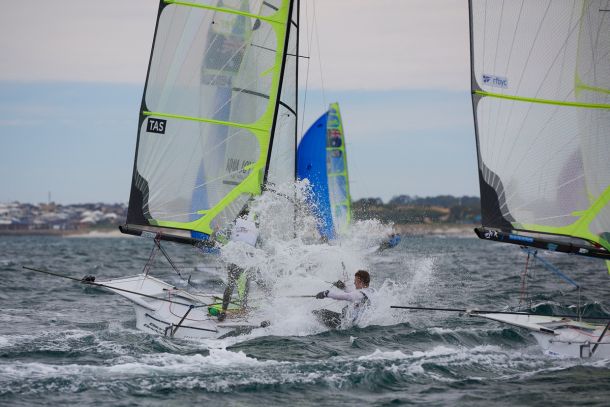 The 2014-15 Zhik Australian 9er Championships being held at Jervoise Bay on Western Australia’s spectacular coastline promised everything for the three fleets of 29ers, 49erFXs and 49ers totalling 65 boats all hanging on the results of the final day’s competition.

It had been relentless work all week for the young skiff sailors with fresh to frightening breezes pushing new boundaries on many days, in combination with a couple of tricky lighter days interspersed in the series. The final day saw all teams steeling themselves for the expected 18kt doctor due at midday, departing the beach in a very soft 4-8kts fickle breeze.

And sure enough the doctor delivered, arriving right on time. It wasn’t long into the first race of the day (race 14) that the expected winds hit and it was game on. All fleets revealed new levels of skill and strength after a very tiring week, with the leaders Joel Turner/Lewis Brake in the 49ers and Kurt Hansen/Jim Colley in the 29ers being able to maintain their leads despite losing this race to their challengers hungry for the opportunity to snatch the final day’s victory. Only George Stent/Ben Robinson in the 49erFX division were able to stamp their authority on their rivals from the outset.

Mid-race 15, the doctor had increased to 20kts+ and the seaway didn’t delay in climbing over the 1m mark. The conditions continued to intensify and unsurprisingly capsizing began to play a part in these tight battles for all fleets. However, the leaders from the penultimate day managed to regain some lost ground from race 14 and reassert their positions.

The ROs commenced the final race 16 in strengthening conditions and it unfortunately reached breaking point at 20kt gusting to 24kts with 1.5m seas resulting in the abandoned signals to be flown and racing was over for another year and national championship.

The presentation was opened by the local City of Cockburn Mayor Logan Howlett, one of the key sponsors of the event, who expressed his appreciation of some of the most spectacular displays of sailing on show over the week.

The series had played out as expected, with full-bodied action aplenty on Jervoise Bay. World 29er Champions Kurt Hansen and Harry Morton spoke on behalf of all sailors, promoting the personal and sporting opportunities and participation in international competition. Joel Turner spoke on behalf of the senior fleet declaring it had been some of the best sailing conditions he had experienced during the week. All teams reaped a year’s worth of sailing in one week, with light and fickle to frightening conditions now impressed in their memories.

There was something to take away from this regatta for everyone. George Stent and Ben Robinson’s victory in the 49erFX demonstrated it has emerged as an extremely powerful two-person skiff, certainly not just a rig design for the Olympic women campaigners by any stretch and will prove to be a very popular class in the years to come for all sailors wishing to experience the power and speed of an 18fter in a two person 16ft skiff.

World Champion Kurt Hansen and Jim Colley’s victory in the 29er class was certainly well deserved but hard fought battle playing out right to the end. Australian 9ers are very fortunate to have such sailing prowess to size up to at these times. Then rookie 29er skipper John Cooley, sailing with past national champion and 49er sailor Angus Williams in the most robust conditions demonstrated it is a class offering unimagined opportunity for our youth sailors to take on the world’s best in the exhilarating international skiff.

And of course the best U21 49er team in the world Joel Turner and Lewis Brake’s ascension from the29ers a few years ago through to the Olympic 49er class and their victory in such conditions confirms all that the Australian 9er Project’s management, planning and goals have been striving for, over the past four years.

Overall the sailors commented it had been their best sailing experience to date, despite any result disappointments. There were abundant smiles worn on weary faces for everyone leaving the presentation at Jervoise Bay Sailing Club.

Next year’s Australian 9er Championships, following the Yachting Australia rotation policy, will be held at a venue in New South Wales.