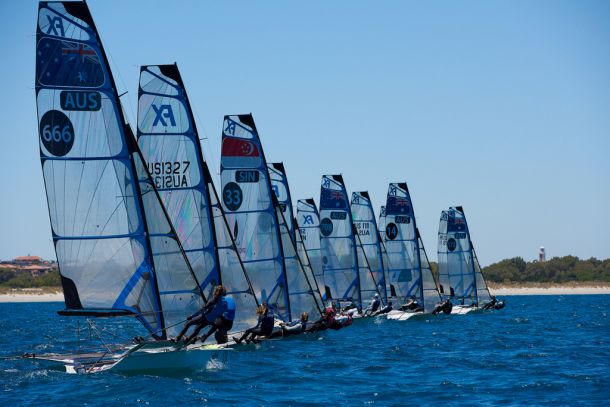 It was never going to be a soft regatta off the Western Australian coast here at Jervoise Bay Sailing Club, 10 minutes south of Fremantle, and Huey has not disappointed many of the best young skiff sailors in the world at the 2014-15 Zhik Australian 9er Championships. With extraordinarily consistent south-east winds building each and every day from the early morning over the past month, it has bemused even the locals, delivering an unfailing 20kts+ for this Australian championship.

The robust conditions have certainly allowed the leaders to shine amidst the pack and have produced some of the most spectacular demonstrations of boat handling skill and competitor tenacity amongst the top 29er, 49er and 49erFX youth sailors of the world.  Eleven International teams from JPN, SIN, HKG, and NZL have ventured to Perth this season to compete in the 2014-15 Zhik AUS 9er Championships and to include one of the two following regattas, either the Australian Youth Championships at FSC or the inaugural Oceania 49er & 49erFX Championships at RFBYC.

The Australian 9er classes are very proud and more than pleased with a total of 65 entries for a WA regatta, aligning with Yachting Australia’s youth regatta rotation policy. This is the third year of the AUS 9er Project where the 29er and 49er/49erFX Associations have crafted a very positive class program with a structured progression from the International 29er class trainer through to the newly introduced Olympic/Open 49erFX class rig and for those who choose the men’s Olympic 49er class.

This week, the Australian 29er and 49er/49erFX class Associations agreed to amalgamate and dissolve the two national associations and will shortly become the Australian 9er Classes Association. Over the past four years, the project’s stakeholders and administrators have steadfastly developed and maintained the integrity and consistency of the AUS 9er Championships product, showcasing where persistent focus and forward thinking with class progression by experienced national bodies can extend.

The AUS 9ers boasts a healthy twenty two teams in the 49ers; a commendable result for the class and AUS Project in WA. The 49erFX fleet include Olympic campaigners (all-female teams) as well as open team, an innovation Australia introduced and promoted since the class’s introduction after London 2012. There are two international teams from Singapore and two campaigning Australian Sailing Squad (ASS) teams Tess Lloyd/Caitlin Elks and Haylee Outteridge/Sarah Cook competing, and half the fleet comprising mixed or all male teams providing exceedingly high standards to be met. The class appeal to the graduating 29er sailors is now confidently secured within the 9er pathway.

Three thrilling races remain to complete the championship; all three 9er divisions still up for grabs.