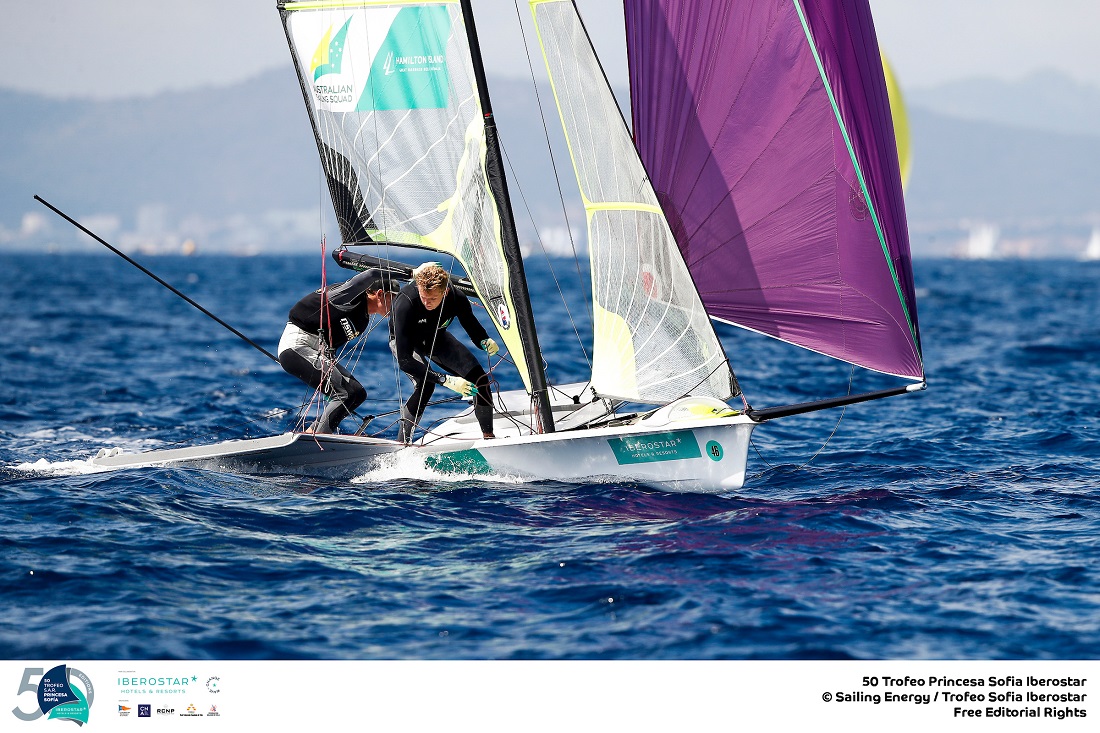 The Australian Sailing Squad pair of Kurt Hansen and Simon Hoffman have made an early charge in the 49er class at the Princess Sofia Trophy Iberostar in Palma, kicking off their competition with 6, 1, 2 results to lead the skiffs by one point from the British pair of Dylan Fletcher and Stuart Bithel.

With no racing due to light winds for the 49ers yesterday, this is the first day of competition in the class. Hansen and Hoffman only joined forces last September: “This is our first overseas regatta together,” Hoffman said. “We trained really hard in the last couple of months – really pushed ourselves to the limit – and we have the right equipment. It’s satisfying to see it pay off.”

“We were itching to see how we’d go and we are where we want to be. We didn’t go so well in first race, but gave it a red hot go in the next two. It was pretty light on the bay with a small amount of shifts, but we worked it out pretty fast,” added Hoffman who found himself in a hot fleet with the Rio gold medallists, Peter Burling and Blair Tuke from New Zealand.

“We had other top sailors in our fleet too, so it was close. It was important to sail in your own lane,” the 20 year-old from Belmont in NSW commented. “There is still a lot of the regatta to go and we’re keen to get a mix of conditions. We are really enjoying it here.”

Three other Australian pairs are also competing in the class, with West Australian brothers David and Lachy Gilmour also getting off to a strong start. A second place on their scorecard has them in 10th place overall, while Tom Needham and Joel Turner are 15th, but just one point behind, after adding a win in Race 3. With a large fleet of 108 boats split into four groups, points at the top of the leaderboard are tight.

Sam and Will Phillips did not start the regatta the way they would have liked. The Victorian brothers are in 71st place.

In the 470 Men’s, Chris Charlwood and Josh Dawson are in 22nd place. They are one point ahead of Rio Olympic silver medallists, Mat Belcher and Will Ryan in 25th place, after two races were sailed on Day 2.

“We were a little bit up and down,” Belcher said after their 22nd and sixth places. “We’re making simple mistakes and small errors which are obviously costing us. We have to try to get used to racing in large fleets again – the last time was September in Japan.

“The conditions are tricky, compounding the problem,” he said of the shifty 5 to 7 knots on their course area. “They were relatively stable, but patchy.”

Of the mistakes, Belcher explained: “We were starting towards boat end of the line in Race 3. A Spanish boat was over the line, he was aggressive. Unfortunately, he was to leeward of us, so we decided to let him go – we couldn’t take the risk. It meant we were late to start. The message is, we are here to check on our performance.”

Rio silver medallists Jason Waterhouse and Lisa Darmanin are maintaining the status quo. The sailing cousins added ninth, a win and seventh places in the three Nacra 17 races. They are fifth overall, only eight points off the leaders, Ruggero Tita and Caterina Banti from Italy.

Darmanin’s brother, Paul, and his sailing partner Lucy Copeland have moved up to 23rd place, with a best result of eighth in Race 4.

In other Australian Sailing Squad results, Tess Lloyd and Jaime Ryan are the leading women in the 49erFX. Finishing the day with a second place, they are 14th overall following a further three races.

After starting the event so well yesterday, Natasha Bryant and Annie Wilmot have dropped to 22nd, their best result a 10th in Race 6. Amelia Stabback and Caitlin Elks are four places away in 26th overall, with a best result of seventh.

In a repeat of yesterday’s opening day, a light breeze fluctuated at 3 to 4 knots at the appointed 11am start time. Fortunately, crews were not waiting too long before racing got underway on the Bay of Palma.

Racing continues from 11am local time tomorrow and finishes on Saturday, 6 April, 2019. There are 1225 sailors from 67 nations competing and the Australian Sailing Team squad is representing in the 470 Men’s, 470 Women’s, 49er, 49erFX, Nacra 17 and Finn classes.

For full results and all information, see here: www.trofeoprincesasofia.org/en/