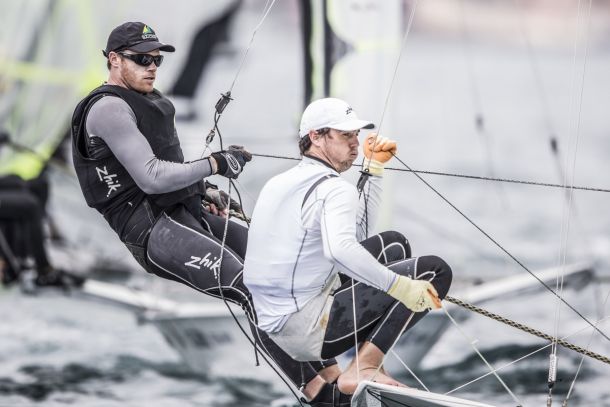 Racing got underway at the ISAF Sailing World Cup Hyères on Wednesday, 22 April in the ten Olympic and two Paralympic classes. After a light wind morning, the wind increased modestly throughout the day across all five race courses.

In the highlights of the day from an Australian Sailing perspective, Olympic gold medallists Nathan Outteridge (NSW) and Iain Jensen (NSW) took the lead in the 49er – Men’s Skiff after winning the last of the three races on regatta day one. World Championship bronze medallists Jason Waterhouse (NSW) and Lisa Darmin (NSW) added another race win and the overall lead in the mixed-multihull Nacra 17.

In shifty, light conditions it was a mixed bag of results for the other Australian Sailing Team crews with World #1 in the Laser Tom Burton (NSW) posting a second and 33rd to finish the first day in 14th. Men’s 470 World Champions and World #1 Mat Belcher (QLD) and Will Ryan (QLD) are ranked seventh after day one.

London Olympic gold medallists Nathan Outteridge and Iain Jensen are racing their first regatta in the Olympic 49er class in Hyères since winning the ISAF Sailing World Cup in Melbourne last December. They had a bad start to the regatta in their first race, but recovered quickly and finished off the day with a race win and taking the overall lead ahead of their arch rivals Peter Burling and Blair Tuke (NZL).

“It was a pretty good start to the regatta. We had really light wind, which slowly built throughout the day. In the first race neither of us caught their traps, it was shifty and we got it a bit wrong. Sometimes that’s the way it goes,” Iain Jensen commented after the race.

“The last two races were really good though. We were tenth around the top mark in the second race and worked our way up to fourth and in the third race we were second at the top and worked our way up to first. So we are moving through the fleet in the right way and are pretty happy. Just a shame we have our drop already, but we’ll just have to sail a consistent week from here.”

In the Nacra 17 cousins Jason Waterhouse and Lisa Darmanin had a strong regatta start winning the second of the two races, which put them in the lead after day one.

“We’ve been here since Palma so we were quite happy for the regatta to start. We are really happy to start with a sixth and a first place and we were able to get off the start line really well, which is a big step up from last year. The results are a bit all over the place across the fleet and it’s only day one and only two races in, so there’s definitely a long way to go,” a realistic Lisa Darmanin said after racing.

Current World #1 and World Champions Mat Belcher and Will Ryan started the regatta in overall seventh after posting a 13th and eighth in the two races of the day. Even though this is not quite up to their standard, they were happy with how they raced on day one as Mat Belcher explained:

“It was good to get back into racing today and it’s great to have all the top guys here in a top 40 fleet. It was very light today, so it was quite difficult just to get off the line and from a strategy point to pick the right side.

The conditions were very tricky with big pressure differences, but we managed to sail reasonably well finishing 13th and eight in the two races. By our standard that’s not quite what we want, but we’ve had results like that in the past. We are looking forward to tomorrow and to improve bit by bit and to post some good results by the end of the week to get up on top.”

On Wednesday the International Sailing Federation also announced the news that prize money is to be awarded in the Olympic and Paralympic disciplines at ISAF Sailing World Cup Hyères. €72,000 is to be distributed across the 12 events on show in Hyères when the medals are decided on Sunday 26 April.