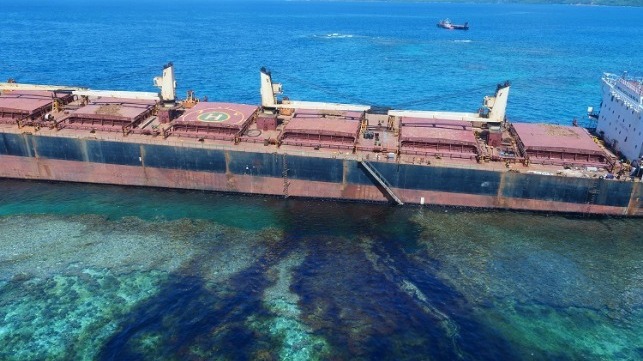 The Solomon Islands government has asked Australia's assistance in response to the escalating ecological damage caused by the oil spilling from the grounded bauxite bulk carrier MV Solomon Trader.

The vessel ran aground on February 5. Fuel spilling from the vessel has spread for hundreds of meters along a coral reef on the coast of Rennell Island. The estimated size of the spill now sits at 75 tons out of a maximum 600 tons on board, and the Solomons government has acknowledged that it does not have the capacity to cope with the incident on its own.

Australian experts from the Australian Maritime Safety Authority (AMSA) deployed last month to assist the Solomon Islands Government. Australia is now mobilizing an offshore pollution mitigation operation, including equipment, vessels and specialized personnel, under the leadership of AMSA and working alongside the Solomon Islands government’s own efforts.

The Solomon Trader went aground during Cyclone Oma. The mine site is operated under contract by Bintan Mining Corporation (BMC), an Indonesian firm, which chartered the vessel from a Hong Kong-based shipowner South Express. BMC maintains that it has no liability arising from the spill, as it is not the vessel operator.

BMC's critics have questioned why the Kangava Bay mine site kept loading cargo when a cyclone warning was in effect, given the hazards posed by the reef and the severity of the storm. Concerns have also been raised that ships coming to the mine since the spill are causing the oil to spread. It has also been alleged that the vessel may have run aground because there may not have been enough crew members on night watch despite the cyclone warning.

The speed of containment and salvage operations has also been criticized as being too slow. The government of the Solomon Islands asserts that the charterer and shipowner bear the primary responsibility to salvage and mitigate any spill.

“Australia continues to stand behind the Solomon Islands Government’s efforts to ensure that commercial parties responsible for this incident take action and are held responsible,” said Minister for Foreign Affairs Marise Payne. “Australians and our neighbors across the Pacific know the economic and environmental importance of our oceans. We expect companies operating in our region to meet international standards and take seriously their environmental obligations.”

The insurer and owner of the grounded MV Solomon Trader have offered a sincere apology to the people of the Solomon Islands following the bauxite carrier’s grounding on a sensitive reef near Rennell Island.

Although matters of liability are yet to be determined, the vessel’s protection indemnity insurer – Korea Protection and Indemnity Club (KP&I) – and the owner – King Trader Ltd (King Trader) – have expressed deep remorse.

Describing the situation as totally unacceptable, both parties are acutely aware of environmental damage and impacts to the local community.

Chartered by Indonesian-based Bintan Mining, the Solomon Trader, loaded with nearly 11,000 tonnes of bauxite, initially grounded during an unexpected gale event on 5 February.

King Trader secured a local tug to try and remove the vessel in a timely manner, however the situation worsened with the arrival of Cyclone Omar, which pushed the stricken vessel harder into the reef, resulting in hull and engine room damage.

Several factors have impacted and delayed the salvage response, including the vessel’s power being lost.

The remote and hazardous location has made it difficult to secure local resources and it’s been time-consuming bringing in resources from other locations. Personnel and specialised equipment have been flown in by the vessel owners from different countries including Australia, New Zealand, Vanuatu, Singapore, the United States and Europe. Limitations of the local airstrip mean that heavy equipment including pumps and generators have had to complete the final part of their journey by sea.

Inclement weather has made it difficult and at times impossible to access the vessel, and conditions have been too dangerous for external underwater inspections – a key assessment ahead of salvage operations progressing in earnest.

Another setback was the vessel being ransacked once the crew was evacuated, resulting in on-board resources that may have assisted with the early response being removed or damaged.

KP&I and King Trader said the focus has always been on working with response stakeholders to protect the environment as far as practically possible, particularly as far as oil containment is concerned.

The response is being overseen by professional maritime salvors.

The restoration of some on-board power yesterday has enabled a deck crane to lift key salvage equipment on board.

The task of transferring some 600 tonnes of fuel oil on the vessel to higher and safer tanks is progressing, with a view to the oil being pumped to a barge which is due to arrive shortly from Vanuatu.

Another priority is dealing with some 70 tonnes of fuel oil that has leaked into the coastal waters. Boom placement and shoreline cleaning is underway, in accordance with recommendations from international oil spill experts.

Salvage divers are on standby to conduct external examinations of the hull and, if deemed possible, plug hull breaches with sealing compounds. These activities can only be done when deemed safe, as per weather and tidal conditions and in accordance with international maritime health and safety protocols.

Weather conditions have pushed much of the leaked oil to sea where it has dispersed, however some oil has still caused unacceptable coastal damage.

Reports of the Solomon Trader crew being absent from the vessel or intoxicated at the time of the grounding are false.

KP&I said everyone involved in the response had a common goal of making the situation better in the shortest possible time frame, however it emphasised that such maritime casualty responses can be time-consuming, complex and unpredictable, particularly in remote and hazardous locations.