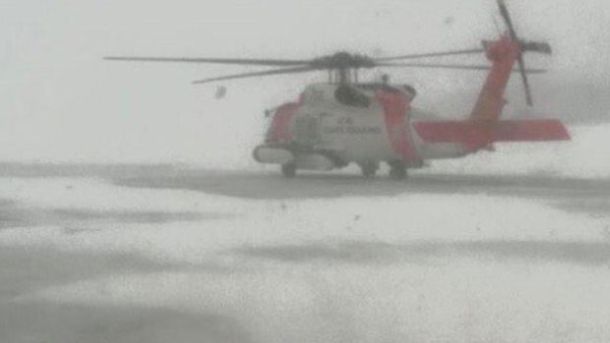 SANDWICH (CBS) — A father and son who had set sail for Australia had to be pulled from the water by the Coast Guard during Sunday’s fierce blizzard.

The adult son and his father, both Australian citizens, were rescued by Coast Guard members from a helicopter 140 miles southeast of Nantucket. The sailors called for help just before 5 a.m. when their 43-foot sailboat lost power and had its sails torn in the storm, Petty Ofc. LaNola Stone said.

The Coast Guard Jayhawk helicopter, launched before the storm became too bad, reached the vessel at about 9 a.m. It took about two hours to recover the men, as rescuers battled 60 mph winds and 25-foot seas.

Stone said the father and son purchased the “Sedona” on eBay. They left for Australia from Rhode Island on Friday, she said.

No one was injured in the rescue, but the men were hospitalized to be evaluated for hypothermia.

The Australian consulate has been alerted, Stone said.

An Australian sailor and his father showed up in Jamestown, Rhode Island, late last year and quickly became curiosities.

They'd bought a 20-year-old racing boat off eBay, sight unseen, and planned to repair it and sail it back home to Australia, starting out in the middle of a brutal New England winter.

“Everyone I think who knew about this thing thought it was a little crazy,” recalled Leonard Hubbard, the boat's previous owner, who befriended the McGlashans, helped them, and urged them to wait for better weather.

Last Friday, after weeks of delays, Jason McGlashan, 37, and his father Reg McGlashan, 66, set sail in the 43-foot vessel, named Sedona, on their once-in-a-lifetime adventure. The latest in a series of powerful storms was approaching, but they thought they could outrun the weather on their way south toward Bermuda.

This brings up the whole thorny issue of “grey imports”. While an overseas boat may seem cheap, there are a lot of factors to consider.

The most important ones are compliance with Australian standards for gas fittings and electrical work. You need to check with your state boating authority as in Australia's wonderful Federal system every state has different requirements.

Importing an American boat is almost certain to require major expenditure on the shorepower system as the USA uses 110 volt while we use 240 volt. You might find problems at marinas if you haven't had the conversion done.

Then there is the question of insurance and liability. As the importer you are effectively considered to be the “manufacturer” and therefore are liable for any problems that occur. Most insurance companies are also likely to require an out-of-water survey before they will cover an imported second-hand boat. And finally, don't forget to include 5% duty and 10% GST.

After all that, it might be cheaper to buy a boat locally. And you won't have to sail it through a blizzard to get it home!