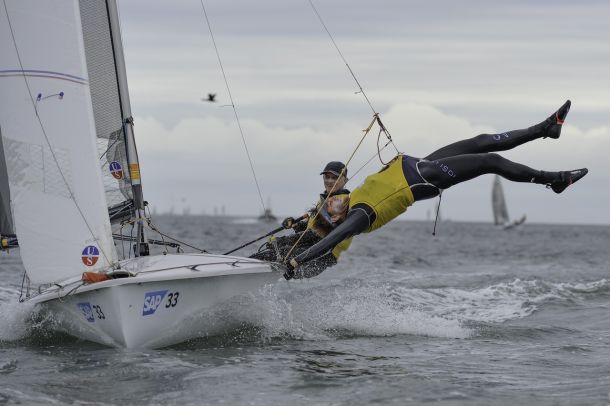 After Mike Holt and Carl Smit won the SAP 505 World Championships with a day to spare, the final day in South Africa was all about who could secure 2nd place overall.

Heading out on to Algoa Bay from Port Elizabeth, Ian Pinnell and Johannes Tellen started the day 2 points ahead of Ted Conrads and Brian Haines from the USA. The British/German team had the added complication of starting today’s final race as the gate start pathfinders, a job that would require them to sail for at least two minutes on port tack out to the right-hand side.

“The wind was quite patchy today,” said Pinnell, the 2008 World Champion, “and we weren’t necessarily going to be able to tack when we wanted to in the early stages of the race.” While the SAP Sailing Analytics revealed that the westerly wind direction was indeed steady, the fluctuations in wind speed across the course made for a tricky game of snakes and ladders.

Former world champions Howie Hamlin and Jeff Nelson led the charge around the first mark, with Pinnell in 8th and Conrads breathing down his neck. However Hamlin couldn’t keep the chasing pack at bay, and Australia’s Sandy Higgins and Paul Marsh took up the lead for most of the race. A fluffed gybe at the bottom of the final run gave Pinnell the chance to pounce at the leeward gate and seize control of the final beat to the finish.

As they crossed the finish line in first place, Pinnell and Tellen gave each other a hug, this new pairing delighted to have secured 2nd overall. Marsh and Higgins crossed the line just behind, with a 3rd place confirming the Californians, Conrads and Haines, for 3rd overall, their best result yet in a 505 World Championships.

The 2015 World Champions decided to sit out the final race, and instead contributed to the live commentary from on the water. “It’s been great to watch a race from the outside and just enjoy it, rather than worrying about the result,” said Holt, celebrating his second world title. “I’m glad we didn’t leave it until the last day to decide the regatta, because it looked really tricky out there.”

Holt paid tribute to the hard-working volunteers who put on such a great show at the Algoa Bay Yacht Club. While one day was cancelled due to 45-knot winds, the other five days produced some of the best sailing conditions that the international 505 fleet has ever experienced. “I can’t speak highly enough of the sailing we’ve had here,” said Holt. “I wish more sailors had travelled to Port Elizabeth to experience it for themselves.”

For video highlights of the week: