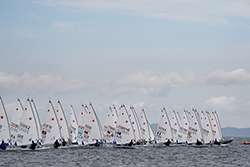 Consistent excellence over a full week in all conditions in Hyères has earned Australian Matthew Wearn and Italy’s Mattia Camboni and the right to party on Friday night before Saturday’s Medal Race.

Blasted by 25-knot westerlies, even Wearn and Camboni looked a bit windswept as they arrived back to the harbour today. But in their different ways, the two 23-year-olds have been dictating their fleets.

Like many before them in the 50 previous years of the Semaine Olympique Française in Hyères, both may remember this week as a significant statement in their careers. But where Australia’s Wearn, and in fact everyone else, had no idea he had already won the Laser, Camboni knew he had won the Men’s RS:X at the end of the second of the three races yesterday.

Camboni had finished third and his nearest rival both on the water and at home – Daniele Benedetti lives in the same building in Civitavecchia as his Italian team-mate – had trailed in 16th. Windsurfers like to give the impression of being super-chilled wave travellers, but that does not mean they cannot do maths on the fly.

Camboni’s worst finish in 14 races had been a 9th, which meant that he could discard anything worse in the final race – luckily, as that turned out to be a 17th – and that if he was 29 points ahead he could not be caught. He started the 15th race 34 points clear of Benedetti, so the celebrations had already begun. He finished the day 28 points clear.

“Of course, I have to party (laughs), it doesn’t happen every time that you win one day before,” Camboni said.

“It’s feels really good. I didn’t expect a week like this. I had two good races and Daniele, who was closest on points to me had one good one and the second one was bad. So, to be sure I needed to be 29 points ahead after the second race and I had more (34 points). So, I knew (I’d won) at the end of the second race.”

“It’s strange, this have never happened to me (in a big event). Last year, at the European Championship I got to the last day 18 points ahead, it was enough to get the gold. So, it’s a really big thing for me.”

In contrast, Wearn, who finished the day 23 points ahead of New Zealand’s Rio 2016 Olympic bronze medallist, Sam Meech, was off the water so fast after a last race in ‘survival mode’ in the Laser, that the maths had to wait.

Doubtless he will be allowing himself some small celebration tonight. Camboni was consistent but ‘only’ won 3 of the 15 races, Wearn has won 7 of his 11, including the last two races today after a third place in the first.

“It was survival mode at the end, kind of hanging-on on the upwinds,” Wearn said – and that’s coming from someone from Perth who won the race. “With past experiences here, with this kind of direction of breeze, it can get pretty gnarly. So, when it starts to pump in like that you know you’re on for a pretty wild race. It’s that ‘anything could happen’ feeling. If you read a puff at the wrong time you could suddenly capsize.

“I’m definitely happy to sail in it, but obviously there is that side of it where you know you’re going to be hanging on for dear life, but it was a great day on the water. The last time I can remember regatta weather like this was here last year (laughs).

“I’ll have a look at points (tonight) and try and execute a good race and go out on a high. I think I put some points on him (Luke Elliot) in the last two races. I think he was inside the top 10, but I think I have enough to have a pretty handy buffer going into tomorrow.”

In the end it was a much handier buffer than Wearn thought.

Men’s RS:X
Italy’s Mattia Camboni is 28 points clear and uncatchable, but the battle for the other two medals has got even closer with France’s Thomas Goyard winning the last two races to jump into second place overall, just one point ahead of Italy’s Daniele Benedetti. Poland’s Piotr Myszka is six points further back in fourth.

Thomas Goyard (France, second place) commented: “It was one hell of a day, we did three more rounds, so we did the entire scheduled program, which is pretty impressive. Today, I was 5-1-1, it's a great day; it's the best in the fleet.

“We had three very different races: a first with not very strong wind, a second where the wind began to turn away from the Mistral and the last one, where the Mistral returned at 30 knots, it was ultra-strong, we had to be on the maximum settings to control the board; it was really amazing.

“Tomorrow is the medal race, the Italian, Mattia Camboni, who’s had a great week, has already won Gold, for me the goal will be to have a Silver or Bronze, we will see. I don’t know what wind we will have tomorrow but anything can happen.”

Women’s RS:X
Relaxed, confident and in home waters, France’s Rio 2016 Olympic Champion, Charline Picon, will be hard to catch tomorrow as she enters the medal race with a 14-point buffer over the woman she beat into silver in Rio, China’s Peina Chen. If Picon finishes seventh or better, she will win Gold.

As the wind grew too strong, their third race was cancelled. Picon had already had her toughest day, finishing 10th and 7th, having not been out of the top four in the previous 12 races, but Chen could not capitalise, finishing 6th and then 20th.

However, Chen may be able to attack more tomorrow, as her greatest rival for China’s Olympic spot, Yunxiu Lu, also struggled, finishing 12th and 14th to leave her 18 points behind Chen in third place.

As Picon said yesterday, there is a lot more pressure to perform on the Chinese here – as for the British team, this event counts a lot in their Olympic program – and you can see that on the faces with the twists and turns of each day.

Peina Chen (China, second place) said: “Not bad today. The last race was too windy for me. I haven’t thought about yesterday yet, I’ll just try and do my best.

“Yes (there is pressure), because for us (the Chinese team) this is a very important competition so there is more pressure than on Charline. But for us, the Olympic events have just started and we have a lot more coming. I think in the Medal Race everything is possible but there’s not a lot I can do, I’ll just do my best.”

After an unusual stumble on Thursday, New Zealand’s Sam Meech was back in form today, with 2-2-3 in the three races. It means he jumps from fourth back into the silver medal position.

Meech is five points clear of Australia’s Luke Elliot, who struggled for the first time, with finishes of 4-13-17. Elliot was lucky to hold on to third, as Tom Burton, Australia’s Rio 2016 Olympic champion, was having a magnificent day.

Burton won the first race, was third in the second and then his Cunningham broke four minutes before the start of the last race and put him out. He is five points behind Elliot in fourth. Britain’s Elliott Hanson is a further six points back after another strong day, finishing second in the big-wind final race.

Laser Radial
The Laser Radial has the closest scoreboard of the all the fleets. Hungary’s 21-year-old rising star, Maria Erdi, extended her lead over the experienced 28-year-old Finn, Tuula Tenkanen, to nine points from just one point the day before.

Erdi finished 2-1-4 in the three races to Tenkanen’s 5-5-5. Erdi has more experience than her years suggest – she represented Hungary as an 18-year-old at the Rio 2016 Olympics. But she has never been in this position before, as the one leading a major regatta going into a Medal Race.

If Erdi finishes fifth or better she will win Gold. But it sounds like she might have her own private battle in the fleet, as she says she is going to match race Tenkanen tomorrow.

One thing in Tenkanen’s favour is that she does not have to look behind her. Silver, at least, is safe. Emma Plasschaert, who became Belgium’s first ever Laser Radial world champion in 2018, will doubtless feel frustrated tomorrow. After an inconsistent week, she had her best day in the big stuff. She finished 1-2-2, to virtually guarantee Bronze, but she is 19 points behind Tenkanen.

Maria Erdi (Hungary, commented: “I didn’t see Tuula in the first and second races. Then in the last one I was close to her at the end of the second beat and I tacked on her, otherwise I sailed my own race.

“We’ve been practicing some match racing, with Ali Young (Great Britain). You don’t get many opportunities to match race in a real regatta, so I think we’re going to do that, because if it happens at the Olympics and you have to fight for a medal, you have to be ready for it. I’ve never been a position where I’ve been match racing the other.

“In the second race I had a great lane off the line, so I could just do my own thing. I was leading at the top mark by quite a lot, so that was quite an easy one. I could sail my own race.

“If you were in a bunch, you had to sail high and that was much slower. It was really choppy, so if you could just go low and fast it really paid off. It was kind of the same for Emma (Plasschaert) in the first race. The last race was a little trickier and shiftier. We had to tack more.”

Tuula Tankenen (Finland, second place): “I had a consistent day, but they (Maria and Emma) were better, they were just a bit faster. It might be a match race, but I guess it depends on Maria, because she is quite a lot of points in front of me.”