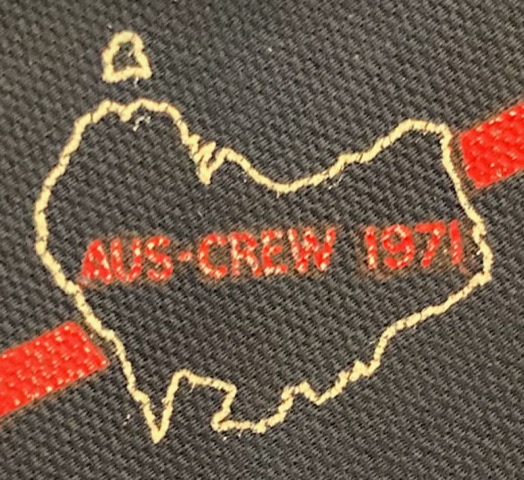 “If you can remember it, you weren’t there,” a phrase often used in connection with Woodstock, but equally applicable to the infamous Auscrew parties of the Admiral’s Cup era of offshore racing.

Some of those who pretend to remember them are having a fiftieth anniversary lunch in Cowes, Saturday 4th September, at which they will attempt to recall the stories of yesteryear.

Yes, it was back in the glory days of the Admiral’s Cup, when as many as nineteen nations sent three boat teams to Cowes, England, to contest what was known as the World Championship of offshore racing, the fabulous seventies, that Auscrew was formed.

The story goes that two Aussie yachties, Peter Doran and Mike Hesse, were sharing an apartment in London, while sailing out of Cowes at the weekend. This was 1971, and upwards of twenty boats were contesting the trials to select three boats for the British Admiral’s Cup Team. Over a few beers they worked out that at least five of the boats had one or more Aussies in the crew.

Peter Doran was sailing on Noryema and Mike Hesse on Mersea Oyster, they decided that this dependence on Australian yachting skills should be recognized by the creation of an exclusive membership club for Aussies and named it “Auscrew”.

The first ever Auscrew party was held that year on a boat called Morwenna, belonging to legendary boatbuilder Tom Richardson of the famous Elephant Boatyard. It is believed the second party, held in ’73 (an Admiral’s Cup year) was in a boatshed recently bought by Roger Motson, an English member of Auscrew.

Legend has it that to gain entry to the party, guests had to pass through an opening little bigger than a cat flap, and some distinguished members of the yachting fraternity were seen squeezing through the entrance.

As was obligatory in the seventies a club tie was created featuring a map of Australia upside down, enclosing the words ‘AUS-CREW 1971’, and membership would also be extended to the other English crewmen aboard each boat with their tie defaced by a diagonal red bar. Owners would also be allowed to join with their ties bearing the mark ‘OWNER’ beneath the logo.

In this heyday of the Admiral’s Cup Auscrew membership grew rapidly, as did the popularity of the Cowes Week party, which had graduated to Spencer’s Rigging loft, where all were entertained with bawdy tales from the likes of David “Fang” Kilponen, together with the great and good of yacht design and racing such as Ted “Tenacious” Turner, German Frers, Jim “Kialoa” Kilroy, Dick Carter, Jim Hardy, Syd Fischer, Ed Dubois and many others.

Off season gatherings in the English countryside built on the legend, with awards for squash, clay pigeon shooting, tiddlywinks and many other worthy activities.

Sadly the demise of the Admiral’s Cup, with the last event held in 2003 and won by Australia, saw Auscrew parties also consigned to the history books. However to celebrate 50 years of Auscrew, a reunion of Auscrew members and their partners will be held Saturday 4th September at “The Prospect”, Sir Max Aitken’s old home in Cowes with more than fifty expected to attend.

It is interesting to note that Kurdurmurkarae (sic) Mr Peter Doran (Global) and Dr Roger Motson (defaced UK) are now also members of the hallowed Royal Yacht Squadron in Cowes and that in order to maintain some of the original larrikin character of the eclectic club, it is proposed to induct Cruising Yacht Club of Australia (CYCA) Life Member Peter Shipway as an honorary member of Auscrew at the reunion.

If we can remember the party, we will let you know how it turns out!