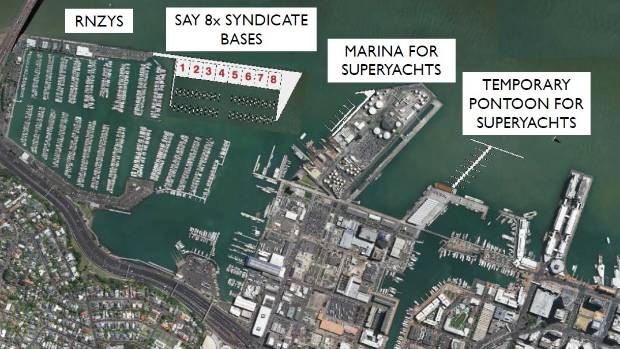 Stop Stealing our Harbour's 'Option A' would take advantage of a proposed Westhaven Marina extension to house America's Cup syndicates. Image from Stuff.co.nz.

A harbour lobby group that fought Auckland Council over extending the city's wharf now wants its support over the America's Cup.

Stop Stealing Our Harbour, which forced council-owned Ports of Auckland to halt a wharf extension, is proposing two waterfront locations for the 2021 hosting of the America's Cup.

On Tuesday morning, the grass-roots group deliver a presentation to the council's powerful Planning Committee and pitched two alternatives to what is currently planned.

The marina, which is to the west of the Viaduct Harbour and Halsey Wharf locations, has been marked as 'Option A' by the group. Option B' would distribute syndicate bases around existing waterfront structures.

“We're agnostic about where [America's Cup bases] go as long as it's low cost and is not going to impede the harbour. It's just one of the options, it is a viable option.”

When not used as America's Cup facilities, the Westhaven site would revert to providing yachting facilities for Aucklanders, Goldwater said.

To read the full story and see an image for Option B, go to Stuff.co.nz.