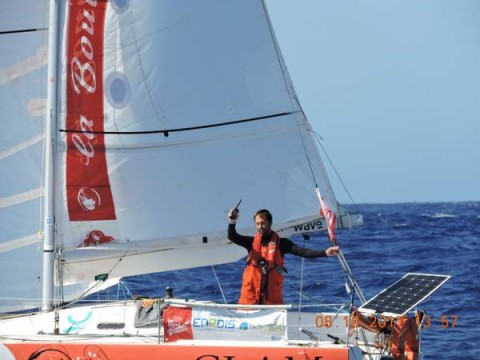 The light airs are making the sailors’ nerves jangle. They’re all very much aware that it’s not far to the Canaries now and that today’s lucrative placement on the Atlantic roulette wheel may well set them up for big losses tomorrow. In the zones of calm littering the course this evening, the solo sailors are armed with only their patience and their vigilance in a bid to limit any damage and make the best of any gains where they have the means at their disposal.

These last few miles are going to be long! After a week of racing, the Mini-Transat La Boulangère fleet, which is 200 miles from the finish at best, will have to demonstrate real grit and patience to make landfall in Gran Canaria. On the menu for these last few days are erratic winds and blazing sunshine, which will be hard to stomach. Now is also the time when each of the skippers is beginning to draw up an inventory of their remaining provisions and wonder at the benefits of rationing out snacks and drinking water. The latter is the crucial element of course as it is reckoned that an offshore racer must drink three litres of water a day, more when the temperature rises. Not being sufficiently hydrated equates to a dip in vigilance of up to 20%, impaired judgement and an inability to get restorative sleep. Suffice to say that in the coming hours, the first leg of the Mini-Transat la Boulangère may all come down to the detail.

The sleep of the just

There are clearly certain skippers within the Mini fleet who have no problem dropping off to sleep, even though they do have to watch that they aren’t out for the count for too long. According to a survey carried out by Ocean Dentiste, one of the support boats, the prize for best sleeper would go to Mathieu Lambert (Presta Services Bat) with eight hours in a row, just ahead of Germain Kerlévéo (Astrolabe Expéditions – idéesgestion.com) and Thibault Michelin (Eva Luna).

Perhaps it’s important to differentiate here between the peaceful sleeper and the skipper that has overcooked things and gone into the red. During this time, other skippers are keeping watch, like Julien Bozzolo (Mariolle.fr), who’s making the most of having a particularly high-performance VHF to relay his playmates’ messages to the support boats. Indeed, it’s thanks to him that Emanuele Grassi (Penelope) was able to quickly get in contact with Blanche Hermine to alert them to his technical woes: a rudder gudgeon has pulled out with some delamination on the transom and few tools to effect repairs.

It is also the role of the support boats to boost the frayed morale of the troops by their presence. Others will have to simply get on with it themselves at the tail end of the fleet as their deficit is too great now. This is the case for Slobodan Velikic (Sisa 2), who’s set sail again from Leixoes, Porto’s commercial port, and Julien Mizrachi (UNAPEI) who’s left La Coruna with a new mast. Back out on the racetrack, there’s still time for them to play catch-up of course.

Far from such considerations, at the head of the race the battle merrily continues. Arthur Léopold-Léger (Antal XPO) has now opened up a very slight lead over Ian Lipinski (Griffon.fr), though this may not prove significant given how random the conditions are. Within the group of favourites, Erwan Le Mené (Rousseau Clôtures), now back in podium position, has gained over 40 miles in relation to the head of the fleet in 24 hours, whilst Simon Koster (Eight Cube Sersa) has lost 20 over a similar period. As the leaders stumble in the calms, there may well be a bunching up of the fleet with more upsets in the ranking.

In the production boat category, Erwan Le Draoulec (Emile Henry) has snatched back the lead by clawing back 25 miles in 24 hours from Clarisse Crémer (TBS). Tanguy Bouroullec (Kerhis-Cerfrance) is back on the podium in third place after sailing a blinder that has won him 50 miles over the same period. As such, clearly no-one is protected from a nasty surprise. Behind the big names, there is room to dream…