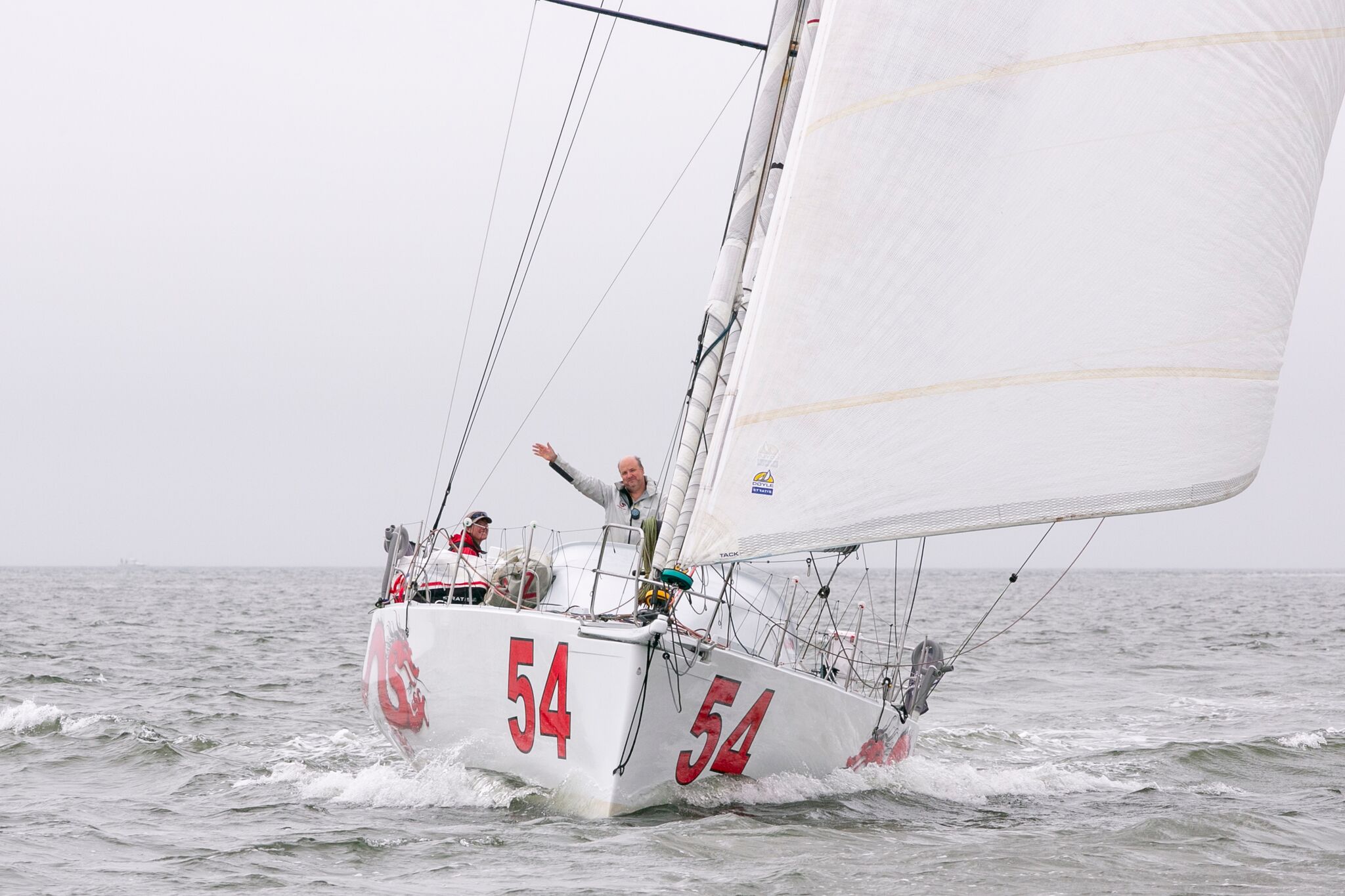 For the nine teams still racing, the past 48-hours have been brutally uncomfortable upwind sailing. However, as the teams rounded the virtual mark Point Alpha, they have changed to a starboard tack, increased boat speed and are direct reaching to Portland. Reaching conditions are favored by the Class40 design and it is evident by the speeds coming off the boats ranging from 14-18 knots. The French/Italian duo of Catherine Pourre and Pietro Luciani onboard Eärendil are approximately 130 miles out from the finish line and will be aiming for another first place finish. Their closest pursuer is one of the oldest boats in the fleet, #54 Dragon, followed closely behind by Toothface 2 and Angola Cables.

The first arrival is expected in the early hours of Tuesday with the remaining fleet expected into Portland throughout Tuesday morning.

Tristan Mougliné, #128 Toothface: Currently in 3rd
“We have no water ballast this leg, which isn’t so good for going upwind and has slowed our performance but we managed and are in an ok position but nothing great. So that was disappointing but we are still on our way! We have been really aggressive with the stack. We tried pinching a little bit with too much sail and it didn’t really work, then we tried to foot a little bit with smaller sails and that seemed to go ok. We were side by side with Eärendil for awhile which was fun but they were just quicker with water ballast so it was a little bit tricky. We did just cross Amhas, we were on starboard, they took our stern on port a little while ago which was a good feeling I guess and I’m sure we will converge at the turning mark… Of the 5,000 At Cup mile I’ve done, these have been the toughest 200.”

Micah Davis, #127 Amhas: Currently in 5th
“Everything is ok (onboard), we replaced the tack line for the stay sail in New York, specially because we knew we were going to bash upwind and right as we were about to tack over, about a quarter of a mile behind toothface, it blew! No staysail in 25 kts is slow, so we did a little bit of everything, a little backwards, a little tacking, and we finally got it re-rigged and now we are on going, back in the fight. It sucks, it really sucks, but were doing good. 3 days of 25 kts wind is (£@$#) and its bloody cold out. I can’t wait to turn the corner and we are ready to come home. My mom and dad are there and my sisters will come down, whoo we are ready.”

Leg 2 takes competitors 360 nautical miles from New York to Portland, Maine. There is one mark of the course, Point Alpha, which is south of the Nantucket shoals. Overall in the standings French/Italian entry, #145-Eärendil is currently in first place with 22 points, followed by Amhas and Talanta. Both offshore legs of the Atlantic Cup are worth double points. The Atlantic Cup is scored on a high points system leaving 22 points up for grabs in this leg.