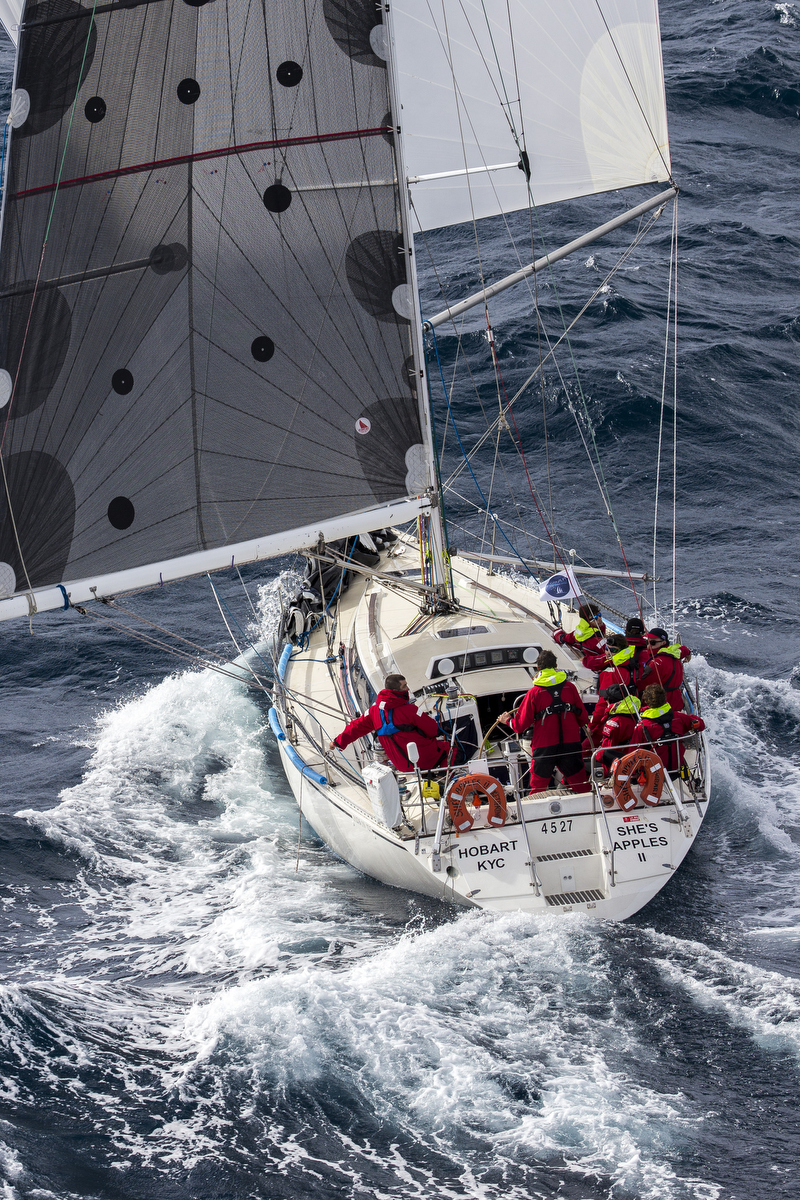 The frontrunners in the Sydney Noumea Yacht Race are on record pace and the toughest conditions behind them with reports this morning from the fleet of manageable and warm 15 knot SSE winds and settling seas.

Four hours after the 10am Sunday June 3 start from Sydney Harbour, the first casualty has been reported to the organising club, the Cruising Yacht Club of Australia. Sadly Marcus Mackay’s Jarkan 12.5 She’s Apples II, delivered all the way from Hobart for the adventure-filled mostly family campaign was short lived when the mast came down at the first spreader in a gybe.

A very disappointed Mackay said this back at the CYCA on Monday morning: “We are pretty devastated. We were running with the kite up in 25-30 knots and went into a gybe and the rigging failed. Over the mast went. We were able to cut the rig away and no one was hurt. We are trying to work out why it failed and reassessing our plans as we won’t make the New Caledonia Groupama Race either.”

On Sunday evening Tony Levett’s Sydney 38 TSA Management retired with battery issues leaving a fleet of 20 making their way to the French territory in the South Pacific where they’ll meet the Royal Akarana Yacht Club’s Auckland Noumea competitors who also set off on Sunday.

By Monday morning, June 4, Tony Kirby’s 46-footer Patrice, a regular Rolex Sydney Hobart entrant, had snuck ahead of the chasing pack with less than 800 nautical miles to go. Based on a current speed of 15 knots Patrice will reach the finish line at Noumea early on the morning of June 7 giving them a record-shattering elapsed time of 3 days 18 hours for the 1,064nm race track.

Brindabella’s fastest time of 5 days 18 hours set in 1991 is well and truly under threat by the top four boats at this point on day though winds are set to further ease and swing easterly under the influence of the strengthening high pressure system.

Fortunately for the Ryckmans twins who own the Welbourn 50 GBP Yeah Baby, now fourth in the fleet and doing 16kts, the boat is still on a starboard tack. An update received at 0830hrs Monday June 4 read: “Busy 24hr on Yeah Baby, took out port wheel yesterday in a broach, lucky starboard tack most of the way. 800nm to go. All in good spirits.”

The fleet can be continuously tracked via http://noumea.cyca.com.au/standings/.