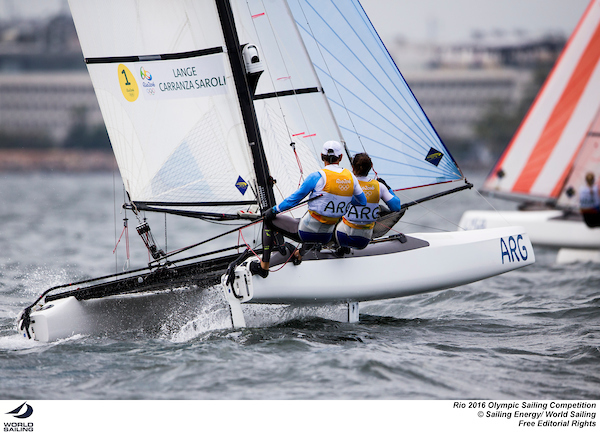 06/06/2018
After a series of global events, Sailing's 2018 World Cup Series will draw to a close in Marseille, France as the Paris 2024 Olympic Sailing Competition venue hosts the Final.
Numerous Olympic medallists, World Champions and World Cup Series stars will be amongst the 220 plus registered sailors from 34 nations, racing in 158 boats. This will be, for most, the last big competition before the significant Hempel Sailing World Championships Aarhus 2018, which is the first Tokyo 2020 Olympic Games qualifier.

Average temperatures in Marseille will be around 23°C throughout the week, with plenty of sunshine but a slight chance of showers are expected on some days. The wind speeds are set to range from 7-14 knots during the week, which will deliver exciting racing for the sailors competing.

On the venue, Greek Laser Radial sailor, Vasileia Karachaliou, who won silver in last year's World Cup Series Final, in Santander, Spain, commented, “This is my first time in Marseille and I am really excited for the event to begin. The event, so far, is really well organised and I think it'll make a great place for the 2024 Olympic Games.

“My plan is to sail as much as I can before the start of the competition, so I can adjust to the conditions and sea state and begin with full confidence,” said Karachaliou.

Karachaliou assumes that the week will consist of a light sea breeze and she hopes that knowing that in advance she can best prepare. Karachaliou intends to keep a consistent level of sailing with solid starts and less mistakes, compared to the previous round performance, in Hyères.

Karachaliou added, “This is my last competition before the World Championships in Aarhus and I want to qualify my nation and hope to compete in the Tokyo 2020 Olympics.”

One of Nacra 17 fleet favourites, Santiago Lange and Cecilia Carranza Saroli (ARG), are also testing the playing field before racing kicks off.

“We've been here for three days so far and the conditions are good. On our first day here, we faced puffy winds but the conditions have eased now and will continue to do so throughout the week,” said Saroli.

Lange added, “It seems like a tricky place to compete in, so we will need to be smart on how we approach every race. Despite that, I think it's a great place to sail and I think the Olympic Games would be perfect here.”

The Argentinian Olympic gold medallists mentioned that although experience matters, the Nacra 17 has evolved and that has allowed others to adjust quicker, making it an unpredictable and challenging class to compete in.

The Women's RS:X fleet has a highly competitive turnout, with some of the top sailors in the class competing, including last year's Santander World Cup Final winner, Patricia Freitas (BRA).

Freitas is familiar with these waters, as she competed in the 2017 European Championships held out of the same venue. “The weather last year, in May, was quite challenging however Marseille looks like the complete opposite. It will be a light competition,” expressed Freitas.

The Brazilian got injured towards the end of 2017 and has been out of the game until the recent Medemblik Regatta, in the Netherlands.

“I made my return two weeks ago in the Medemblik Regatta and this will be my second competition of the year. I am looking forward to it,” said Freitas.

Even though the Brazilian has not been training for quite some time due to injuries, she is hoping to go into the competition with the intent of claiming a spot on the podium.

“I haven't been training nor have I been out on the water besides my recent competition. I won the Final last year however I am not in the best shape but I will try my best.

“The turnout is great and there are some really great sailors here, like Zofia Noceti-Klepacka (POL), Stefania Elfutina (RUS) and Hei Man H V Chan (HKG). It's going to be a tough final but I plan to make it to the podium,” mentioned Freitas.

Racing will commence at 11:00 local time on Tuesday 5 June and will conclude with the Medal Races on Saturday 9 and Sunday 10 June, which will be streamed across the World Sailing Network.