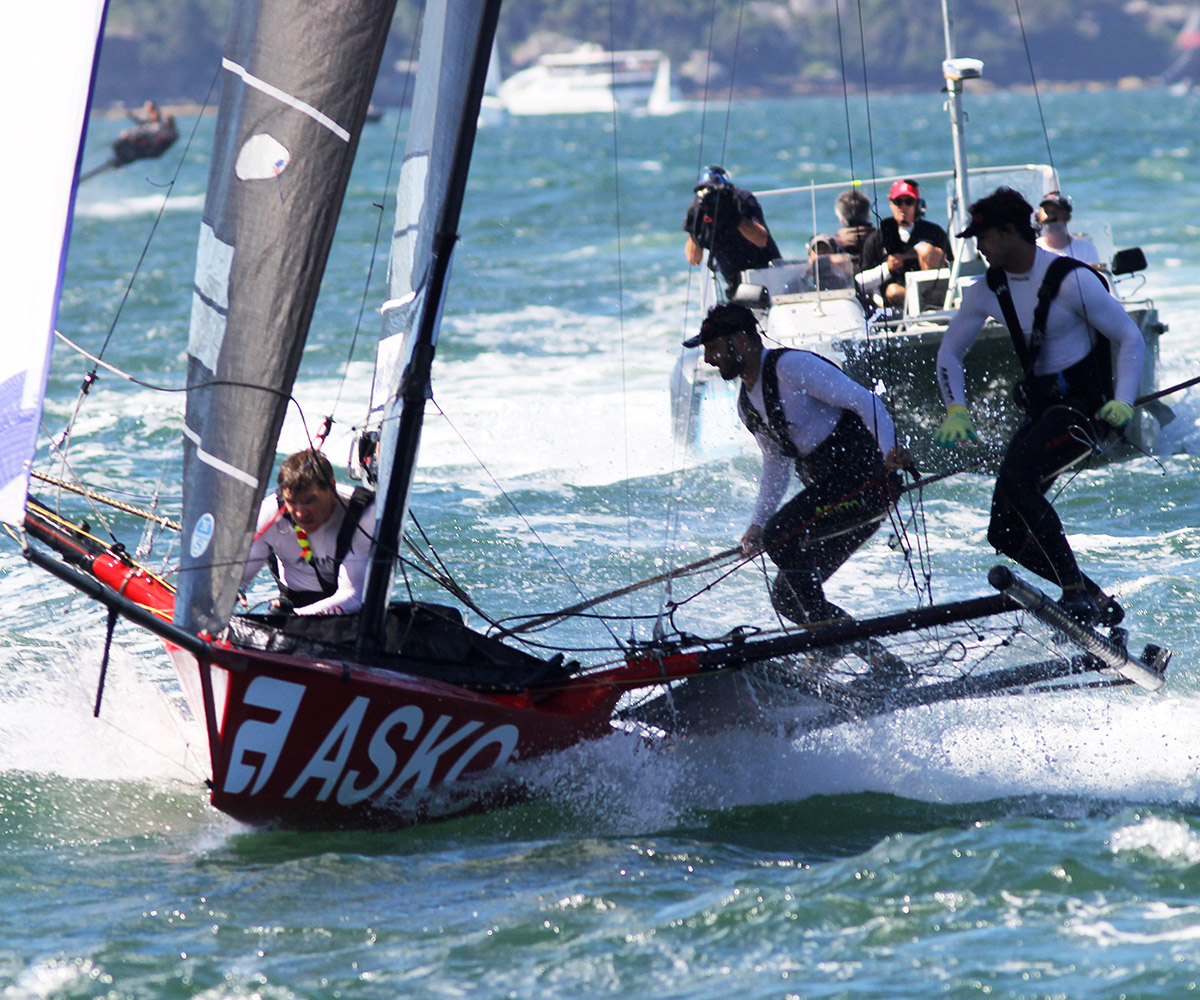 With a 13-15-knot North East wind, and a brilliant, sunny Sydney day, the conditions were perfect for a spectacular finale to the championship.

Asko Appliances revelled in the conditions for the first race (Race 8) and the team quickly went to the lead on the windward leg from the start off Clark Island to the windward mark off Nielsen Park.

Asko's domination was soon evident and the team held a 35s lead over Einning Group (John Winning Jr., Sam Newton and Euan McNicol) as spinnakers were set for the run back down the harbour to the bottom mark.

The first casualty of the day happened at the start when defending champion, Smeg was recalled for being over the start line too early.

On the short 2-lap windward-return course, this spelt the end of Smeg's chances of retaining the title.

Asko continued to lead throughout the race and finally crossed the finish line a 20s winner over Winning Group, which had pushed the winner all the way around the course.

As the wind freshened a little over the latter half of the course, Finport Finance (Keagan York, Matt Stenta and Charlie Gundy) began to make a move and reduced the margin from the leaders to just 21s at the finish.

The Kitchen Maker-Caesarstone (Jordan Girdis) and Bing Lee (Micah Lane) could do no better than 8th and 14th respectively, and lost too much ground on the points table to be likely winners of the championship.

As the fleet began Race 9, Asko Appliances held a net two points lead over Winning Group for the title and they were the only real contenders for victory.

Finport Finance confirmed the finishing burst of Race 8 and led for most of the first windward leg to the mark off Nielsen Park.

Yandoo (John Winning) was also strong in the conditions and trailed the leader by just 12s as the fleet raced downwind, back to the bottom mark off Clark Island.

Two large ships leaving the harbour made conditions difficult as the teams battled to avoid the wind damage they would cause, but Finport Finance had little trouble retaining her lead over Asko Appliances and Winning Group.

Yandoo lost time on the run (one of the departing ships certainly didn't help the team's chances) and she fell back into the clutches of Bing Lee and Noakesailing (Sean Langman), with The Oak Double Bay-4 Pines (Aron Everett), R Marine Pittwater (Simon Nearn) and Rag & Famish Hotel (Bryce Edwards).

Finport Finance was unstoppable on the following windward leg and maintained a comfortable lead over the final lap of the course to win by 55s from Asko Appliances, with Winning Group a further 32s back in third place.

Next Sunday is the last race of the Club Championship and the final hit out for the JJ Giltinan (world) 18ft Skiff Championship, which begins on Sydney Harbour on March 2.

For those who can't make it onto the water, live streaming is available on 18FootersTV: