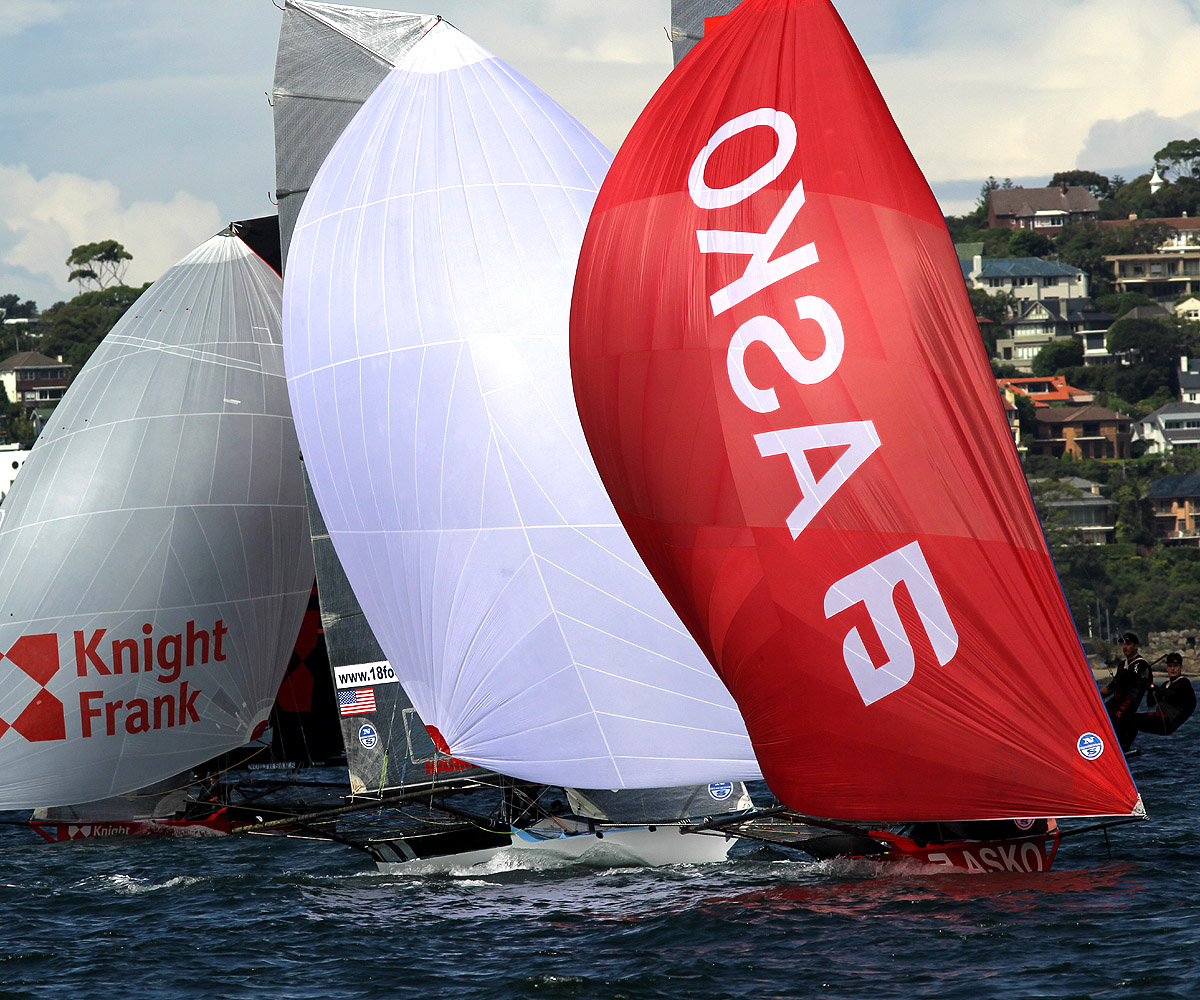 The Asko Appliances team totally dominated the international fleet with a brilliant victory in Race 5 of the 2017 JJ Giltinan 18ft Skiff Championship on Sydney Harbour today. Sailing a four lap windward-return course in a 5-7knot Easterly wind, Marcus Ashley-Jones, Seve Jarvin and Jeronimo Harrison grabbed the lead at the second windward mark then raced away to win by 3m11s.

In a race which saw some disappointing performances by a few of the top teams, provisional series leader (after discards) is New Zealand’s Yamaha (David McDiarmid) on 9.33 points, followed by Thurlow Fisher Lawyers on 10, Smeg (Lee Knapton) on 16, Asko Appliances 18, C-Tech 19 and Coopers 62-Rag & Famish Hotel (Jack Macartney) on 20.

Coopers-Rag & Famish continued to maintain a clear lead at the bottom mark on the first lap from a tightly bunched group of challengers, led by Asko Appliances.

On the second windward beat, Asko’s dominance came to the fore and the skiff opened up a break over the early leader Coopers-Rag & Famish, Noakes Youth, Harken, Smeg, Peroni, Knight Frank and Thurlow Fisher Lawyers.

Harken had moved into second place at that point and was a further 2minutes ahead of Peroni, which led the rest of the fleet. Thurlow Fisher, C-Tech and Smeg improved their positions on this lap and the battle for points was going to produce some very tight racing in the pack.

When the fleet turned for home, Asko was clear of Harken with Peroni in third place, but the New Zealand team on C-Tech was coming home fast and grabbed Peroni just short of the finishing line.

With two more races to be sailed on the weekend, a protest and an appeal of a protest decision to be heard tomorrow (Friday) it is almost certain that the overall result won’t be decided until Sunday.

Race 6 of the JJ Giltinan Championship will be sailed on Saturday 4 March, at 3pm. The Australian 18 Footers League Spectator Ferry will leave Double Bay Public Wharf at 2.30pm.

A spectator ferry will follow each of the races in the championship, leaving Double Bay Public Wharf alongside the clubhouse, at 2.30pm on each race day. All races will be live streamed from the Camera Cat and the drone, a world's first. Head to 18footers.com to watch the race live or catch up later.