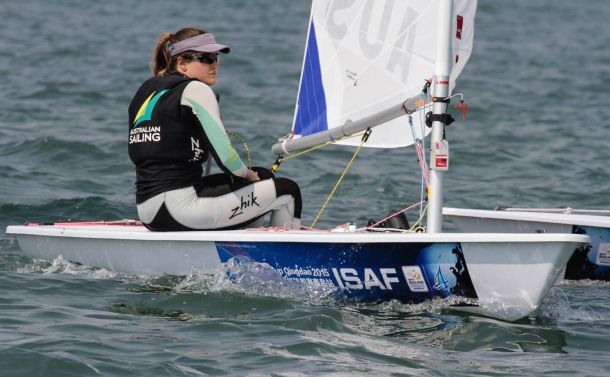 Ashley Stoddart had a consistent regatta after kicking-off with a second place and finishing up with a fourth, which saw her move from tenth to ninth place on the last day.

“It was a tight medal race, but I was pleased to finish the event with a good start and a good overall medal race. Moving up a place was also pleasing,” Ashley Stoddart said at the conclusion of the regatta.

Qingdao was another opportunity for Stoddart to get valuable racing experience ahead of the Laser Radial class world championships in Oman 17-22 November 2015.

It was a challenging week for everybody at the typically light 2008 Olympic venue with light wind and strong current once again a regularity throughout the week, but the conditions were exactly what Stoddart went to Qingdao for as she explains:

“We came here to work on light air racing, knowing that this is the venue to really put the pressure on and light winds being one of the weakest areas of my sailing. We had five days of under ten knots and it was exactly what we came here for. To be honest, we would have been disappointed to come here and for it to blow, because we can get that at home. The racing was always tight, and at times I was executing nicely and at other times I made it hard for myself.”

“I had a breakage in race two of the regatta, which was probably an error on my part that resulted in a sub optimal race result. I’m happy with the racing experience I have gained in these conditions, I have learnt a lot and I’m happy to be making progress but at the same time learnt some hard lessons.”

Stoddart will next compete at the World Cup Final in Abu Dhabi, after already qualifying for the event at the 2014 ISAF Sailing World Cup in Melbourne last December: “From here I go home and will be training in Sydney before heading over to the World Cup Final in Abu Dhabi and then onto the Worlds in Oman basically straight after that. So there is still time in the program to continue improving and progressing towards the Worlds.”

Australia is yet to qualify the Laser Radial for the 2016 Rio Olympic Games with the Class World Championship the next opportunity.

In the Laser event, Australian Sailing Squad’s Laser sailors Mitchell Kennedy and Ryan Palk competed for the first time at the 2008 Olympic venue and in the absence of Australian teammates and Laser World #1 and #2 Tom Burton (NSW) and Matthew Wearn (WA) they were looking forward to the challenge, which did not go quite as planned.

After a bad start to the regatta Ryan Palk recovered to post a couple of top five finishes and a race win, but two disqualifications saw his final score drop to overall 20th in the 38-boat fleet.

“On a whole, I’m happy for the most part with how I sailed. I got a bit unlucky with a really close OCS and a second yellow flag in the last race. These were both good races also, and with those two scores my position would have been very different. However, with letters in the scorecard in an eight race regatta, it’s hard to make the podium,” Ryan Palk said self-critically.

“Despite this, it was nice to have a race win and be consistent also, it’s such a tricky venue it really does test your patience and adaptability. The race committee got all the races in and we had enough breeze for the whole program so that was good too.”